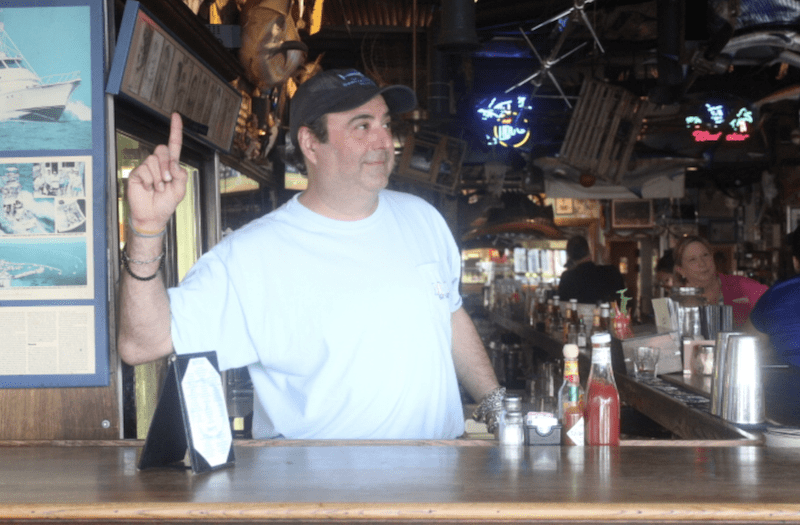 The Deep Ellum neighborhood has undergone a vast amount of changes in the last few decades. Though its claim to fame was once its music, being one of the biggest entertainment districts in the state, in recent years it has established itself as so much more. In the 1920s there were less than ten restaurants in the area and today there are over 60. The population has increased by almost ten percent in the last five years alone. Nowadays, people come to the area to shop, eat, entertain and stay. Below, find stories from Deep Ellum’s own residents, customers, and business owners.

“None of us own our buildings, we’re all leasing so I never imagined I’d be open this long,” Pete Zotos, founder of St. Pete’s Dancing Marlin, said.

When Zotos says “that long” he means it; he set up shop in Deep Ellum over 25 years ago.

He chose his classical bar’s location, which is now referred to as a Dallas landmark, because of the edgy, limitlessness that he saw in Deep Ellum two decades ago. “Commerce Street was like a fire lane that would never be closed off,” Zotos said.

When Zotos opened up St. Pete’s on this fire lane, he said that there was tons of parking and only six or seven places to eat in Deep Ellum; today, with a coming soon sign on every other corner, that is far from the case.

He finds that new businesses and new clientele are making an impact on the area.

“My business is down right now because the newer Deep Ellum visitors don’t know about St. Pete’s and the older clientele, my customers, can’t get down here on the weekend because of the parking,” Zotos said.

Though he believes family-owned restaurants like his are becoming a rarity, he also sees a silver lining.

“I’m a hands-on owner, and most of the family-owned businesses are,” Zotos said. “But many of the newer owners aren’t, and their staff can make their places go away pretty fast.”

Zotos says that once a new customer comes into St. Pete’s, they’re a regular; his current struggle is just getting them to come in while having so many other new options.

“We wanted to start small and test the waters a bit. Back then there was almost nothing in Deep Ellum,” co-founder of Pepe’s & Mito’s Mexican Cafe, Sandra Rojas said.

The Rojas’, like Pete Zotos, opened up their Deep Ellum restaurant twenty-five years ago after being drawn to the unique, edgy neighborhood.

The Rojas’ pride themselves on being a “Mex- Tex,” rather than a “Tex-Mex” restaurant; emphasizing their unique Mexican twist. Many of their recipes trace back generations to Sandra’s husband’s grandfather, “Pepe.”

Though Pepe’s & Mito’s was once one of the few restaurants in Deep Ellum, today it is one of many.

Rojas finds that’s the artsier the neighborhood gets, the more businesses open up around her.

She believes that the newer Deep Ellum clientele brings about new customers for P&M too. She adds that competition between restaurants throughout the neighborhood is welcome.

“Pepe’s is not like any of the others,” Rojas said. “Our customers are not just our customers, they become friends over the years.”

She points out that she sometimes sees her customers more than she does her own family.

This is not to say that Rojas gets no family time because of her work though.

In fact, after spending their childhoods watching their parents run the restaurant, the Rojas’ two children decided to come work alongside their parents after graduating from college.

Rojas finds the key to her restaurant’s prosperity, despite new competition, to be consistently great service.

“Being here for twenty-five years we’ve been very blessed because we have a good following that still continues to come,” Rojas said. “That was one of my goals.”

“In those days it was a grungy, feral place where a poor artist could still find large spaces and cheap rent,” Hart said.

“Not my kind of place now and certainly not within the grasp, rent-wise, of artists looking for cheap digs,” Hart said.

So what keeps Hart coming back to Deep Ellum decade after decade? Family-owned restaurants like Pepe’s and Mito’s Mexican Cafe and St. Pete’s Dancing Marlin.

Hart says that he and his wife and drive to Dallas from northeast Tarrant County just to eat at the two places no matter how long it takes for them to drive and find parking.

After smoking a cigar and drinking a Tanqueray and tonic with Pete Zotos at St. Petes or downing his favorite salad fajita with a side of chips and salsa with his dear friend Sandra Rohas at Pepe’s & Mito’s, Hart is on cloud nine.

Despite Deep Ellum’s gradual changes, it would take much more than neurotic rescue dogs or inconvenient parking to stop Hart from dining at his two favorite Deep Ellum spots.

Ronnie Wilson, owner and co-operator of Louie Louie’s Piano Bar, wanted to open a place that would attract people from all over the city. His Piano Bar offers a mix between comedian and musician vibe. The venue hosts many bachelorette parties, birthday parties, Monday blues jam nights and so much more. The bar is so unique compared to others in the area, it takes a lot of talent to play multiple instruments, sing and entertain the crowd, which is why it is such a popular place. Louie Louie’s piano bar offers lots of entertainment, great music, and a night that you won’t forget.

“I wanted to open a diverse and unique establishment that people can come to and see things they haven’t seen at any other typical bar in Dallas,” says Wilson. “We have people that come rap, sing, breathe fire, put on magic shows, anything like that that will keep our customers entertained.”

Wilson established Louie Louie’s Piano Bar in 2015, he opened their first location in 2008. Wilson’s goal is to make every night special and show customers something they’ve never seen before. Even the staff and doorman become part of the shows.

“We like to think of ourselves as a kind of adult Disneyland of rock,” says Wilson. “Our servers like to sing and dance and occasionally our doorman might get up on the stage and rap, we are all about giving our customers an amazing experience.”

Large sculptures sit on the patio area beside other bright abstract paintings. People roam through the gallery speaking softly to one another about the stunning artwork on the walls. Kirk Hopper Gallery is located on 3008 Commerce St in Deep Ellum. The gallery features artists including Matthew Bourbon and Ashley Whitt. The artwork is admirable and there is so much vulnerability in each piece.

Kirk Hopper, the owner of the gallery, wanted to have a large sleek open space that offers many different types of contemporary art. Hopper has always had an interest in art and always wanted to own his own gallery. After exploring areas in Dallas he found that Deep Ellum was the perfect area to open the gallery.

“It’s important to me that every individual that walk in the door feels welcome. Our gallery entails many exhibits, we are constantly changing our exhibits so that we can showcase different artists.” says Hopper. “Our gallery represents contemporary artworks in all media, emphasizing mainly on established Texas artists.”

Nicholas Nevins has lived in the Deep Ellum Lofts for a little over two years now. Nevins is a 28-year-old SMU graduate. He has lived in Dallas since graduating from college and spent his first three years after college living in the uptown area of Dallas. While he loved living in that area of Dallas he was further from his work and many of his friends already were living in the Deep Ellum neighborhood. He found himself constantly commuting back and forth and finally decided to look at apartments in the Deep Ellum neighborhood. After many weeks of apartment hunting, Nevins found himself attached to Deep Ellum Lofts located at 3401 Commerce St.

“The community offers so many amenities which made my decision a whole lot easier,” said Nevins. Amenities include emergency maintenance all day, every day, and on-site laundry facility, rooftop patio access, amazing views, private patios and best of all it’s an easy walk to all the entertainment Deep Ellum offers.”

Deep Ellum Lofts has seven beautifully-renovated historic buildings that allow access to their rooftop patios, resort-style pools, an urban garden and a fitness center. The Deep Ellum Lofts consist of three buildings over three blocks. These include the Murray Lofts, Continental Lofts and Farm & Ranch Lofts. Each of these lofts has a rich history and culture and fit perfectly into the neighborhood vibe.

“Ever since I moved to this neighborhood I’ve met so many interesting and new people, everyone that lives in the area are extremely friendly and welcoming,” said Nevins. “The apartments are nicer than I could imagine and the entertainment in the area is so fun.”