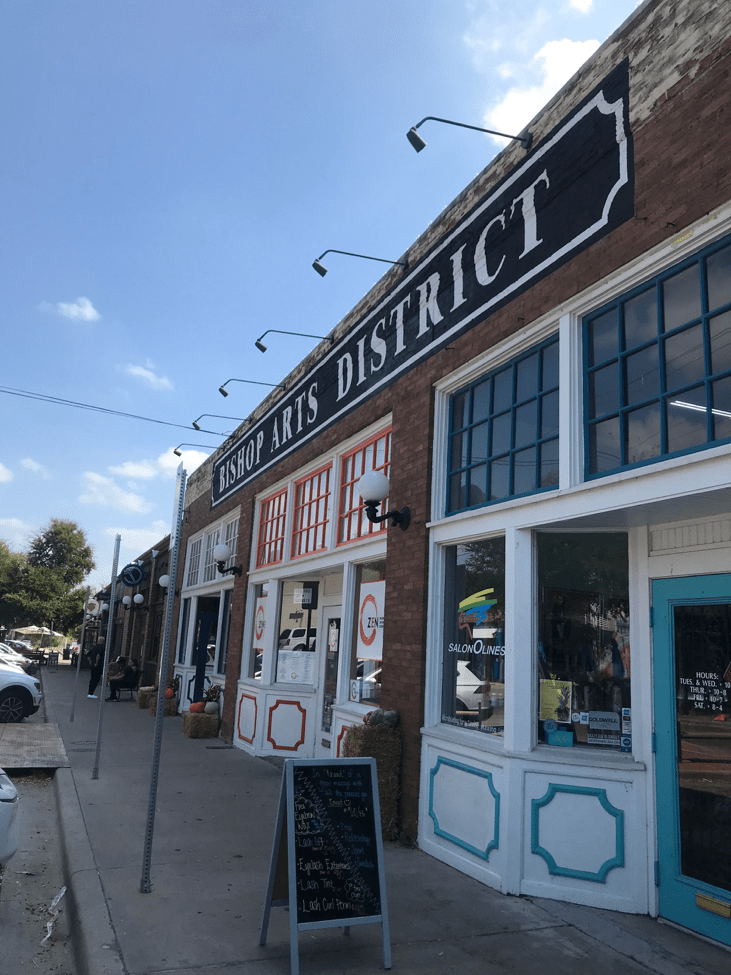 Lydia Arnold has been in one fistfight in her life.

When she was 10, she told a kid from Highland Park that she was from Oak Cliff. He asked if she was in a gang.

“I punched him. He punched back – he was stronger,” said Lydia.

That was back in the 70s, when Bishop Arts District was just rows of vacant storefronts and Oak Cliff was riddled with crime and poverty. Lydia is one of a dwindling number of true locals left working in the area. She works at Fête-ish, a quirky gift store on West Seventh Street.

“I grew up on Zang Boulevard and I walked to school, but in the 70’s it was definitely not your child-friendly neighborhood,” said Lydia. “I was a latchkey kid, which meant I had a house key on a shoelace around my neck. Both of my parents worked, and I learned real quickly not to make eye contact.”

The area was once bustling: in the 1930s, it was the location of Dallas’ busiest trolly stop. Then, in the 1960s, it began a rapid decline as shopping malls and busses became more popular. Developer Jim Lake saw opportunity in the Bishop Arts District in the 90s, and began transforming properties into walkable retail space. Since then, developers have swarmed the area, building condos and coffee shops at every corner they can get.

“Some of the first markers of change were fewer bullet holes in the roof we had just put on, more white people walking around, websites talking about the community – that kind of thing,” said Lydia. “But the neighborhood is changing. It’s becoming less edgy, less artsy.”

If there’s anyone left who has seen Oak Cliff through it all, it’s Lydia’s father, Nicholas Arnold. His parents moved to the area when he was just a baby in the late 1940s. He’s 73 now, and has never left.

“Oak Cliff used to be like Austin of 25 or 30 years ago: laid-back, bohemian, weird,” said Nicholas. “That is gone now. We’ve become homogenized and are fast becoming as impersonal as Uptown.”

This homogenization hasn’t happened overnight. If you drive north on Zang Boulevard, you’ll still find blocks of quinceañera dress boutiques, fruterias, and barber shops. But what worries people like the Arnolds is that most outsiders don’t even realize how small of a piece Bishop Arts plays in the greater Oak Cliff community.

“Coming here, you see such a big difference between Bishop Arts and the surrounding houses,” said Nadia Enriquez, a tourist from Houston.

In reality, Bishop Arts District makes up of only a couple blocks – about 0.58 square miles – of the larger Oak Cliff area, which spans nearly 90 square miles. The hikes in property prices and shifts in culture have bled throughout the whole community, yet outsiders still define the whole area by this handful of blocks carefully branded as Dallas’ best-kept secret.

“The romance with North Oak Cliff is still strong and I think will continue as long as there is land on which to build,” said Arnold. “Even now there is zero lot line building on regular city lots that covers the entire lot – no grass, no trees, no bushes – just total hardscaping and row housing.”

Not all of the change is bad. According to the 2000 Census, the area’s median household income was $35,135. This number rose to $55,855 in the 2017 American Community Survey. The area is safer, and locals have found work in many of the new businesses.

“When I was starting my professional career, I worked for corporate offices, and they’re all based in Irving or wherever. I had to cross the river to go to work,” said Lydia. “My first ever job was at a place called Cliff Top Pottery over here when I was 14. That first job was in Oak Cliff – and I said then that I always wanted to work here, and now I do.”

Still, it’s become harder and harder for these locals to stay where they’ve lived their whole lives. Blocks of single-family homes surrounding Bishop Arts have been razed and replaced by single-bedroom condos charging rent as high as $1500 a month, said Nicholas.

“Where are the families that were in those single-family houses going to live now? How are the clerks and waiters and busboys and bar-backs going to be able to afford prices like that on minimum wage paychecks? Those to me are big negatives,” said Nicholas.

Lydia, too, has felt the pressure of rising home prices.

“I wouldn’t live anywhere else,” she said. “The ‘old school’ people – what we’re bemoaning is the fact that we can’t afford to live where we grew up. I live with my parents. I’d love to have my own apartment, but I can’t afford it. This is my hometown, and I’m being rent-priced out.”

Still, Oak Cliff pride is alive and well with these lifelong locals.

“Oak Cliff is special. If you live here, you get it,” said Lydia. “I just hate to see it change.”