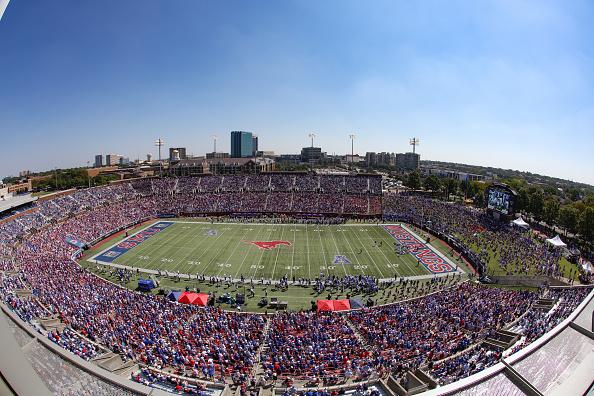 A hot sun beamed down on the turf of Ford stadium during the Sept. 24 football game against the TCU Horned Frogs, one of SMU’s biggest rivalries. The intense 99 degree heat in the sun-drenched stands was just one of the issues fans contended with. The game also saw record crowds, congested parking, and crowded hallways.

What might take a student two minutes to walk from one end of the stadium to the other took 10 as bathroom lines were intertwined with concession lines causing even more confusion for individuals in attendance.

Can you spell disorder?

“The concession area was really packed,” said Imani Holmes an SMU senior studying biology with a minor in math. “At some points, it was difficult the navigate through the crowds of people. At one point, all of the concessions ran out of bottled water.”

SMU officials acknowledged there were big game day problems in a statement to The Daily Campus and explained that the stress of the hot day and record crowd of more than 35,000 in a stadium that seats 32,000 ultimately broke down systems for moving people around in a timely and orderly way.

“There were aspects of our game day experience on Saturday that fell short of our shared expectations and we apologize for that,” officials said in the statement, which was shared with other local media. “Now that we have experienced the culmination of these factors, we can aggressively work to address them.”

Officials hope that the $100 million dollar Gary Weber End Zone complex can help allleviate the sort of problem fans witnessed at the TCU game. The new complex is set to break ground on Dec. 2, 2022. Not only will the complex add on the three-level, 192,500-square-foot feature to the south end zone but it will also add more seating and various elements throughout the stadium to upgrade infrastructure according to officials.

“The $100 million Garry Weber End Zone Complex and Ford Stadium expansion will modernize existing infrastructure and help to address some of the limitations and challenges presented on Saturday,” officials said in the statement. “Examples include additional public restrooms and concessions stands, as well as the installation of a commercial kitchen.”

The horseshoe-configured Gerald J. Ford stadium seats 32,000 fans at capacity with the south end zone being adjacent to Mockingbird Lane. Mockingbird is one of Dallas’s three arterial streets and is a major road within the city of Highland Park. Sitting between SMU’s campus and a major street, Ford stadium is landlocked so cannot expand outward. Only up or down.

The stadium has undergone millions of dollars worth of upgrades since its opening in 2000; however, the 35,569 attendees at last Saturday’s game might argue that SMU facilities needs to invest even more to imporve the comfortability and accessibility to stadium entrances and concessions.

Although cheering for opposing teams, TCU and SMU fans were equally unhappy about the long lines and chaos, with many taking to Twitter and other social media to express their frustration.

Any fans in attendance who want to talk about the SMU vs. TCU concession/gate issues for a potential story, my DMs are open.

Director of SMU Athletics, Rick Hart, tweeted in response to the complaints noting that stadium management and SMU apologized for the hardships fans had to endure. Hart also reminded fans of solutions to combating water issues.

Thank you @SMUMustangs being part of a record crowd at Ford Stadium. We apologize for difficulties ordering/receiving concessions. We will continue to work with @Aramark to improve service. Fans can also bring an unopened water bottle and refill at water fountains. #PonyUp

Southern Methodist University’s long football history is highlighted by the Death Penalty. The death penalty came after SMU’s 1986 football season. NCAA suspended SMU’s football program for the entire 1987 season after SMU violated multiple rules within NCAA policy. Many violations had to do with the use of money and payouts to players.

This punishment crippled SMU’s football program for the next three decades. For years, Ford stadium did not even see attendance numbers in the ten-thousands through this time.

The recent game against TCU, despite adversities, should be seen as a means for SMU’s football program to continue to push away from its past and into a future of success for the team, said SMU officials.

“We’re analyzing every aspect of the experience, looking at short-term changes that can make a difference right away, and incorporating lessons learned into our long-term planning to address other challenges,” administrators said in the statement. “We greatly appreciate our fan support and welcome their ongoing feedback and cooperation.”

The next SMU home game takes place on Friday Oct. 14, as the SMU mustangs take on Navy.