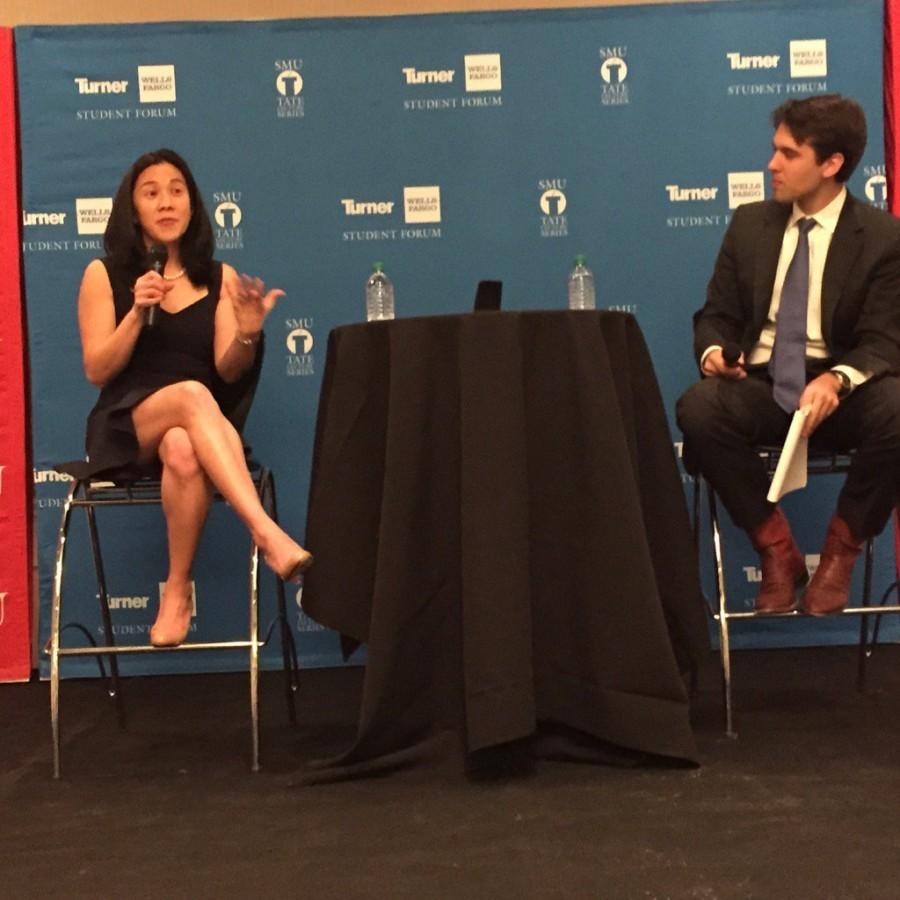 “Working hard over a long period of time” is “Grit,” the phenomenon honed by Angela Duckworth. Renowned psychology professor, co-founder of the Character Lab and author of the best-selling book Grit: The Power of Passion and Perseverance, Duckworth took the stage at McFarlin Auditorium on Jan. 31 as part of the SMU Tate Lecture Series.

Grit is the human trait that Duckworth has studied for a decade and a half, but it has been a marvel without a name since the 19th century.

–RELATED: What goes into planning the Tate Lecture Series

There have been psychologists since who have also delved into the trait that leads to supreme, high achievement.

In her research, Duckworth has determined facets necessary to fostering the trait.

The necessity of talent only plays a minor role: “talent counts, but effort counts twice,” she said.

“No matter what you can do…if you don’t apply effort, your skill disappears,” Duckworth said. Even if LeBron James was born to play basketball, “even world class experts were at some point world class amateurs,” she said.

The 10,000-hour rule says that if you spend 10,000 hours doing any one thing, you will become an expert at it. But Duckworth says that’s not just enough. “It’s the quantity and the quality of effort and practice,” she said.

Close followed the four cruxes of deliberate practice: to set a stretch goal, to focus 100% (yes, get off your phone), get feedback, and reflect and refine.

It was with this deliberate practice, the discomfort of learning, “more effortful and less enjoyable,” that Close received the honor, said Duckworth.

And it is with deliberate practice that one develops Grit. But it’s not the only factor.

“One must truly be interested to be passionate,” Duckworth said, even if “it’s over a lifetime of experience that we learn and attune our interests.”

There’s cultivation of purpose. Experts must “understand the broader work into which their work fits,” Duckworth said.

Last, from the findings of Stanford psychologist Carol Dweck, Duckworth notes that a person must believe in the power of what it means to be human, that “we are learning machines,” said Duckworth, with a destiny to discover.

So, with passion, deliberate practice, purpose, and siding with the growth mindset, one can build Grit.

Where does happiness fit in, though? “I always get the question, ‘but I want my kids to be happy,’” said Duckworth.

“But happiness and Grit aren’t an either-or,” Duckworth explained.

Hence, there’s always the time when one wants to give up. To quit. Is dropping out a lack of Grit?

It does atrophy the skill. It does counteract those 10,000 hours.

“I think young people need to know that dropping out is ok,” Duckworth said. “But sometimes we drop out too early.”

“Sisu” is Finnish for insides—literally “guts.” What Google Translate doesn’t tell you, though, is its other entendre. Sisu is like a battery pack. A superpower. “If you’re losing, pull out sisu,” said Duckworth, as her Finnish graduate students explained to her.

But what the Fins tried to describe in metaphor, Duckworth has described tangibly—Grit.