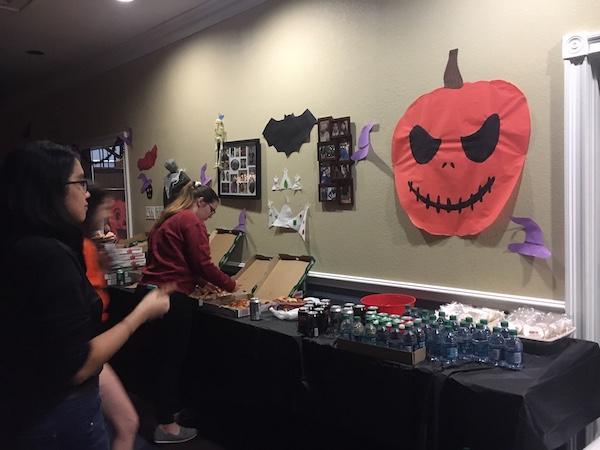 Many guests sported Christmas sweaters and Santa-Claus-printed vests. The room was also filled with Halloween costumes, including an astronaut jumpsuit and a pumpkin t-shirt. A good-natured rivalry ensued among fans of the different holidays as they ate, laughed, and danced in the house common area.

“Pick your team, Halloween or Christmas,” SMU Service House resident Jamie Hall said. “There are a lot of Christmas people, but they aren’t trying as hard as the Halloween people. The Halloween people, there are fewer of us, but we’re bringing the spirit.”

It was hard to count which holiday had more fans under the strobe lights and crowds of people packed into the Service House. Handmade decorations covered the walls, including giant paper snowflakes taped on the windows and rows of Christmas stockings hanging over the fireplace.

Since Club SMUSH boasts free pizza, Boba, and a photo booth, it attracts people from all over campus.

“We like to have a party where we bring in the entire campus,” SMUSH senior resident Andrea Nguyen said. “We make it an all-inclusive event. We like to do it sort of towards the end of the semester as a recruitment tool, too, because we’re bringing in new people every single semester.”

The Service House is an upperclassman housing dorm on campus where residents complete 30 hours of community service every semester and host events like Club SMUSH, monthly dinners with faculty members, and frequent service outings.

“It’s a really tight-knit community because there can only be about 28 of us a year,” Jamie Hall said.

The Service House is located on SMU’s “frat row,” and the building itself used to be a frat house. However, Club SMUSH is different from any frat party, because it’s alcohol-free.

“It’s an event that’s just welcoming for any person on campus,” attendee Leanne Dang explained. “If you want to go to a space that isn’t serving alcohol, it’s a really good option to still get to listen to music and dance and have a lot of food,”

In spite of the small size of the dorm, Club SMUSH brought in a large crowd of students this year. Even some alumni came back to campus to attend. Andrea Salt graduated from SMU last May, but she dropped by to show off her Christmas sweater and catch up with friends at Club SMUSH.

“People should come for the food, for the community, and for the dancing,” Salt said.

Club SMUSH is held once a semester, offering unique themes, costume contests, and DJs each year. The SMU Service House is also accepting resident applications for the 2020-2021 school year. To find out more about the Service House, go to https://connect.smu.edu/organization/smuservicehouse.