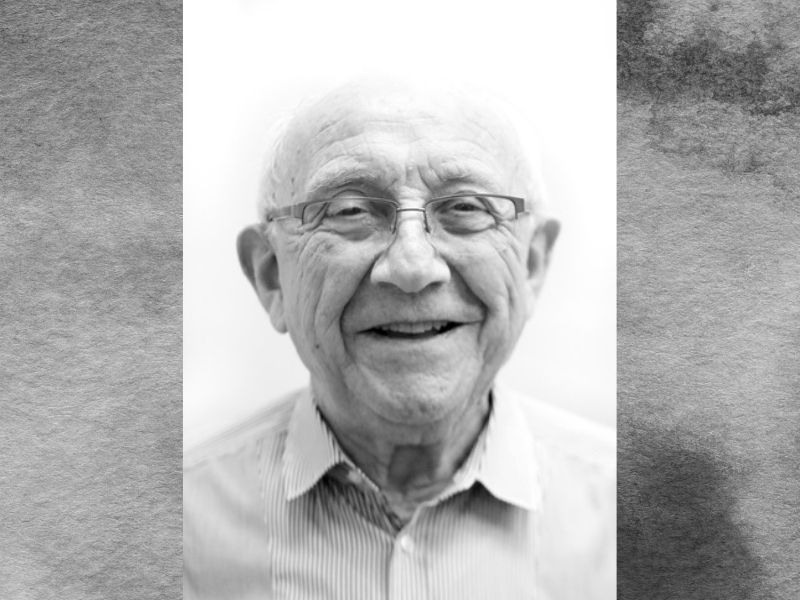 Glauben, who was awarded an honorary doctorate in 2020 at Southern Methodist University, helped establish the museum in 1984. He has often shared his personal experiences with student organizations and he participated in the March of the Living with local residents for the past 13 years, visiting Auschwitz and Birkenau.

“It’s such an honor to learn love and strength from Max, who is truly a hero to the Jewish community,” said Olivia Bock, a Hillel member at SMU, in reflecting on his role as an up stander in the community, someone who stands up to others in the pursuit of justice and human rights. ”Most importantly, he’s taught me about love and strength.”

Glauben’s life story is one of many shown in a 3D holographic video at the museum through an interactive testimonial where visitors can have virtual conversations. He has answered nearly 4,000 questions through the presentation. Students in SMU’s Human Rights & the Journalist class recently visited the exhibit where they were able to interact virtually with Glauben.

Rolling up his right sleeve in the holograph presentation, he points to the letters “KL” tattooed on his forearm, and he looks back up at the museum audience to show where he was forcibly marked for death by the Konzentrationslager Auschwitz camp as a teenager.

“History tends to repeat itself, so we must remember it and never let it happen again,” Glauben said in the presentation.

At the Spring Survivor Series hosted by the Dallas Holocaust and Human Rights Museum, he introduced Jori Epstein, the author of “The Upstander.” After years of knowing Glauben, Epstein was moved to tell Glauben’s story. The book tells the stories of a child who survived death camps, a teenage boy who immigrated to America, and an elderly man who has forgiven the Nazis for killing his family. Glauben’s hour-long speech is mostly about being a decent person.

“You may not hate others, but this does not imply that you support their abuse and intolerance in the world.,” Epstein said in the presentation. “As Max has shown, you can face your hardships head-on and use them to improve the world around you.”

Glauben was born in 1928 in Warsaw, Poland, when the Nazis invaded. Jews were required to wear white armbands with a blue Star of David. His mother and brother were murdered at Majdanek, a death camp in Lublin. His father was captured and killed a month later in Budzyn,. Glauben said he outsmarted and manipulated others to survive.

“A small or big lie can save your life, and it wasn’t malicious,” Glauben said in the presentation. “I didn’t want to give the Germans the satisfaction of hurting me, so I did as much psychological sabotage as I could.”

In the final years of the Holocaust, Nazis walked around with listening devices and dogs searching for the last remaining Jews who were hiding in bunkers. They would toss in hand grenades to force people out of hiding spots. Jews hiding above ground were burned alive, and some of the basements became gravesites since the debris fell on top, making it impossible for life underground.

Glauben’s faith has remained an essential part of his life. His aspirations and beliefs outweighed the negatives and he always wanted to keep moving forward in life.

“Religion is in your heart when you believe,” he has said. “You feel like somebody’s always watching and helping you.

At age 17, he was rescued by Gen. George S. Patton’s Third Army tank division. When the U.S. Army rescued Max on a death march, he enlisted for five years. He immigrated in 1947 and moved to Dallas.

He has promoted the holograph presentations by holocaust survivors in the Dimensions in Testimony Theater at the Dallas Holocaust museum as a powerful educational tool for all generations.

“My reward will be that after the survivors are all gone, there is going to be a place where my child, my grandchild, and my great-grandchild can go and be able to ask a question,” he has said said. “Be curious about the worst tragedy ever in the darkest period of human history, and know that we survived, using the defense mechanisms we all possess.”

Jack Makler, an SMU Jewish student, was inspired by Glauben’s dedication to fight hatred and bigotry by repeatedly offering to speak openly.

“Listening to him share the horrific incidents yet still having so much love in his heart to spread to others is truly remarkable,” Makler said. “He inspires me to express my faith in a positive light, as well.”

Glauben and two of his father’s sisters were reunited in Dallas 42 years after the Holocaust. As workers in Majdanek and multiple munition factories, they survived.

Although the Nazis robbed him of his family and childhood, he has said he does not hold resentment in his heart.

“We are all human and we all possess goodness,” Glauben has said. “That is easier to distribute than hatred.”

He was a loving husband, father, grandpa, great-grandfather, and mentor to many students.

In addition to his wife of over 60 years, Frieda, he is survived by his children, Phillip Glauben and his wife, Linda Glauben; Shari Glauben Becker and her husband, Norman Becker; Barry Glauben, whose wife, Michelle, died of cancer last August; 7 grandchildren and 3 great-grandchildren. Donations will be accepted at the Dallas Holocaust and Human Rights Museum to honor Glauben’s memory.

His testimony will be featured in the museum’s Dimensions in Testimony Theater each day through May and every Friday thereafter.

Lexi Goodman is a student in SMU’s Human Rights & the Journalist class, which recently visited the Dallas Holocaust and Human Rights Museum and reported on up standers like Max Glauben.