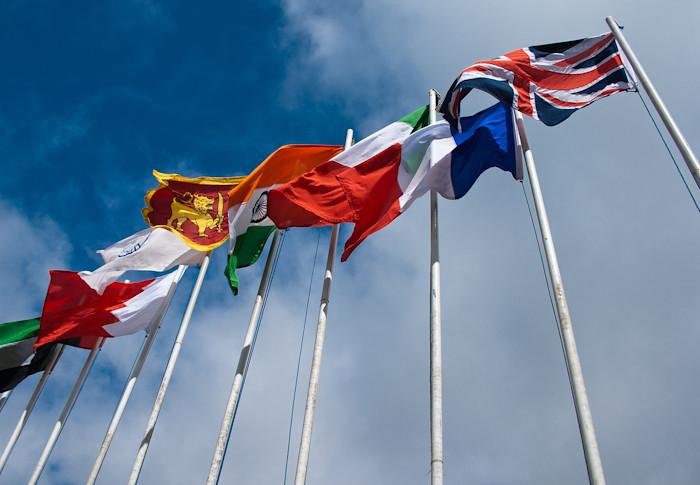 Editor’s note: This story was written by Aysia Lane and Kate McLeod

The SMU community is facing collective difficulties as it responds to the coronavirus situation. Students, faculty and staff have been scrambling to find some sense of normalcy in this unprecedented time. All classes have transitioned online for the remainder of the semester, and students on-campus are preparing to move out. One group of students in particular faces unique challenges as this situation continues to unfold. International students take a leap of faith when they leave their native countries in order to pursue higher education, and now many face uncertainties with basic living conditions. SMU students from around the world help provide some insight into what kind of situation they currently find themselves in.

Shaolong Fan moved to the United States from Yaounde, Cameroon, to pursue his dream of becoming an engineer. While he describes his freshman year as being an overall positive experience, the University’s changes regarding the coronavirus have made him feel alone and anxious.

“I feel like the University gave up on international students,” Fan said. “Here in the States, I’m basically isolated. There’s no food on campus, and I feel trapped in my dorm room.”

Fan is spending the rest of the semester living in his dorm on campus, and is not able to return to Cameroon because the country is in lockdown. Recently, he has become frustrated with the lack of food and resources available to students who have to stay on campus.

“Being on campus during this scary time is lonely, especially when there are just a few other people who also have to stay on campus,” Fan said. “I just keep thinking about my family and how they’re doing.”

Although Fan was born and raised in Cameroon, his family is from Xi’an, China, and he was raised in a traditional Chinese household. He considers both Cameroon and China to be his home, and has extended family in China who are currently under quarantine.

“They haven’t stepped outside of their house for a month,” Fan said. “They fear going out and they want to stay alone at home.”

While in the United States, Fan said that the coronavirus has affected how people treat him because he is Asian.

“My friends would be saying that they’re sad their Spring Break trip was cancelled, and look at me like it’s my fault,” Fan said. “I didn’t create the virus, I didn’t want it to happen.”

Senior Hannah Jane Miller came to the United States to run track and cross country for SMU. The coronavirus has permanently altered what was supposed to be a celebratory last semester of college.

“For me, the first thing that was affected was athletics,” Miller said. “They cancelled indoor nationals while the athletes were already there.”

Miller has run for SMU throughout her entire collegiate career, establishing connections with fellow athletes and making a home for herself in a place far from home.

“It’s weird not having a structure to your day,” Miller shared. “Going to meet people and having a common goal to work towards and not having a time frame as to when that will be over or when it will start again.”

For all students, the next few months are a topic of uncertainty but especially for those who have family overseas and are dealing with the pandemic while being separated from their loved ones. Miller is dealing with various concerns about how her future will turn out not only being an international student but also as a senior.

“As an international student, my parents were told by the New Zealand government not to travel,” Miller said. “So even if graduation happens, I don’t think they will make it, which is kind of gutting.”

After learning of the University’s plan to have strictly online classes for the remainder of the school year, Miller’s original living plans for the next few months had to change.

“I decided to go home. New Zealand urged all kiwis to come home before submitting the boarders to non-residents,” Miller said. “New Zealand goes into lockdown [on March 24] with police and army stationed outside most towns and cities.”

Miller also shared that she got on one of the last commercial flights out of San Fransisco and is currently self isolating in Te Anau.

New Zealand is a relatively small sovereign island country that has a population of just under five million, in comparison to the population of the DFW area, which has over seven million people. Healthcare in New Zealand is largely financed through general taxes and covers preventative care, inpatient and outpatient hospital services and more.

“It’s a lot easier for the [New Zealand] government to put policies in place.” Miller said “In America’s defense, it’s hard to jump on things like this so quickly in a democratic country because you don’t want to produce fear within the public and make it look like an overreaction. It’ll be interesting to see how all of this is handled.”

The CDC has stated that older adults and individuals with chronic illnesses are especially vulnerable. In the middle of such a historic event, the fear of what could happen next is growing and has forced some to analyze simple everyday acts in hopes of protecting themselves and their loved ones.

“I’m someone who is prone to not really overacting and just continuing on because I’m not the demographic that will probably be affected by it but the more I go out and do things and continue to be business as usual, I question, should I be doing this?” Miller said.

Junior Rainna Li left her hometown of Zhuhai, China, and moved across the world to pursue opportunities in America. Now, as she begins making post-graduation plans, she is in constant fear that the coronavirus will affect her chances of success in the future.

“I want to get an internship here and I want to get a master’s degree, but right now… I have no idea,” Li said. “I’m even afraid that after the coronavirus… I cannot stay here because the policy might change.”

Recent responses to the coronavirus pandemic in America, including travel bans and closures of schools, theaters, and restaurants across the country, are causing people to wonder what will come next.

While uncertainty about the future can cause panic, Li said that her worries will subside as long as her family back home in China is safe. Although she is planning on visiting her parents in China during summer vacation, the coronavirus has already begun affecting her travel plans.

“After May 13, if I want to go back to Guangdong province I have to isolate myself in a hotel,” Li said. “The government will offer you a hotel and you’re going to isolate yourself for 14 days. Then, you can go back home.”

While in the United States, Li faces her biggest fear every day when visiting public places and seeing how few people wear a mask. After recently buying several N95 masks, Li was determined to regularly wear one for protection from the virus. However, anxiety about discrimination and racism made her choose not to.

Li says that the culture difference between how Chinese citizens and Americans respond to the coronavirus is obvious. She is concerned that Americans don’t care about the issue, and worries that people are not isolating themselves.

“As an international student and a Chinese, I know how dangerous the coronavirus is,” Li said. “I hope that the issue in the U.S.A is going to be better and more people focus on the protection for themselves and for others.”

Freshman Emily Baker came to the United States to pursue her education while rowing for SMU. Also far from home, the coronavirus has made her freshman year different from what she expected as she navigates through the pandemic.

“I didn’t really worry that much at first to be honest,” Baker said. “For me, it really started to be serious when the travel bans came into place.”

As the number of coronavirus cases has risen in the U.S, the Trump administration has issued a series of travel bans. Initially the UK was not included but on March 14, Mike Pence announced that travel to and from the UK and Ireland would be suspended starting Monday, March 16.

The UK has also started moving students to online classes, informing the public about self quarantining and limiting unnecessary large gatherings of people. Despite the precautions and rules in place, the social climate is still contrasted to the U.S.

International students are faced with a series of obstacles during this time. For Baker, going home before the end of the semester is not the most ideal situation.

“I want to get through my exams first and then go home, because the classes are live streamed,” Baker said. “If I went home I wouldn’t be able to see [my family] anyway. I’d have to become nocturnal cause the classes would be going from six pm to midnight”

SMU Student Senate played a major role in the push for classes to be moved online in the weeks following spring break. Some international students have been negatively impacted by the decision and its rapid delivery to the SMU community.

“For all of the people that would be staying [on campus], mostly international students, it was very stressful finding out on Thursday that they were suggesting that we all leave campus,” Baker said. “It was fine for me because I already had plans in place just in case this happened but I know there were a few other international students that didn’t have a back up plan just in case.”

After SMU released a statement regarding the cancelation of in-person classes through the remainder of the semester, Baker had a change of plans.

“I’m flying home to be with my family. It’s a little stressful, trying to sort out emptying my room before I leave,” Baker said. “but hopefully everything will work out.”

Baker shared that she has a handful of local friends that have offered her a place to stay, but she is aware that not every international student has the same support. She urges those who have the capability, to offer up their homes to students who may not be able to see their loved ones and to check in on them while they may be alone.

“It’s hard enough being away from your family in a time of crisis, when everyone else goes home and can be with their family, it can escalate [those feelings] and be a struggle for some people,” Baker shared.