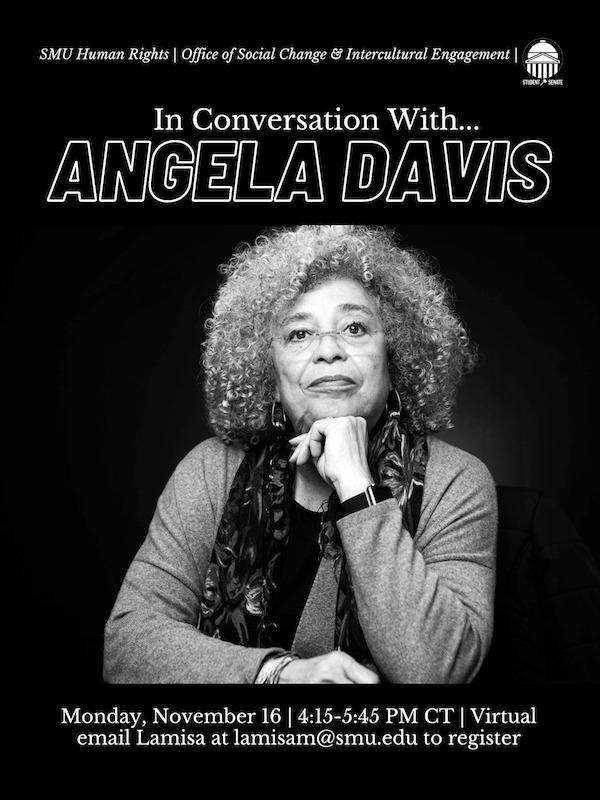 The Human Rights Program hosted a virtual webinar with American political activist Angela Davis on Nov. 16. The audience of 850 listened as the activist shared her insights on human rights issues facing the world today.

The Administrative Director of the Human Rights Council Lamisa Mustafa described the virtual event as a “once in a lifetime opportunity to hear from a living treasure.”

The webinar, called In Conversation with Angela Davis, was led by student moderator Bethany Bass and featured pre-selected questions from the Human Rights community.

“We wanted to ask her about broad themes that anyone interested in human rights could apply to their own lives,” Mustafa said.

The Human Rights Program felt that, along with the questions, the timing of this event was important.

“We recognized that as a student organization, dedicated to advancing human rights consciousness, advocacy, and community on campus, it was our responsibility to prevent this summer’s momentum for Black Lives Matter from dissipating,” Mustafa said.

Identity politics, the #EndSARS movement in Nigeria, and the Black Lives Matter movement were a handful of the topics Davis shared her thoughts on. Davis said that the movements taking place today are the result of decades of work.

“Many of us have never imagined that we would experience a moment like this,” Davis said. “We’re working for the future. And we assume that that future might not begin to materialize for many many decades.”

Mustafa said this concept gave the Human Rights community a much-needed reminder that social justice work takes time. Other students in the program found the discussion to be of universal importance to the greater community.

The webinar was open to students from different disciplines. Senior marketing major Isabel Costian took the opportunity to listen in on the discussion, dipping her toes further into the world of Human Rights at SMU after attending a few year’s worth of the program’s events.

“She had a way of putting everything in context with each other, always making sure to call out events and movements that we, overwhelmingly as members of Generation Z, might have missed out on,” Costian said.

Mustafa said she hopes the discussion inspired viewers to take a critical look at their identity as it relates to those around them.

“We hope that every single attendee was challenged to consider their own social positionality and how they can ethically leverage their power in our collective struggle to build a more just world,” Mustafa said.

The 90-minute long webinar ended with Davis sharing her excitement for the future generation of activists.

“When I see young people doing this work, it makes me happy,” Davis said. “It gives me hope. It makes me feel joyful.”

Click here to watch the recording of the In conversation with Angela Davis webinar.