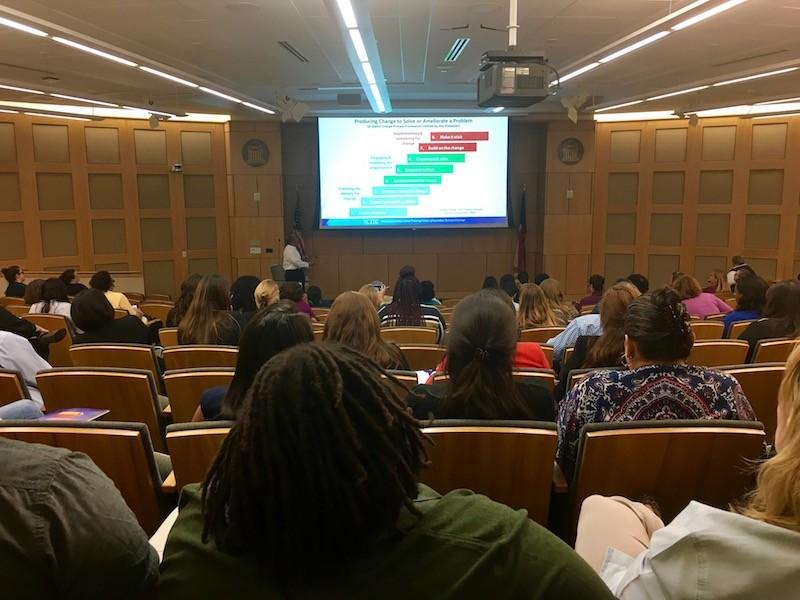 Editor’s note: This story has been updated throughout.

SMU Embrey Human Rights Program served as a host and organizer for a two-day workshop to raise awareness of human trafficking. The workshop, “Protecting Our Sons and Daughters – A Community Workshop to Combat Trafficking and Exploitation” provided participants with information, tools, procedures, and how to identify and understand the problem of sex trafficking locally and nationally.

According to, The Atlantic, there are an estimated 313,000 cases of sex trafficking in Texas and 20.9 million sex trafficking victims worldwide. This lucrative business brings in $150 billion per year to the men and women – pimps – that control their victims/slaves.

“Nobody is knowingly going to step into being a sex trafficked victim,” Cathy De La Paz, a veteran Dallas detective, said. “You step in it, get in it, drugs start and you cant get out of it; the next thing you know you’re a sex slave.”

Due to the increase in awareness the number of rescues has increase from 8 to 10 a year to 200 a year. However, most victims don’t even turn themselves in because this situation is a better reality than their home.

These children share many of the same characteristics. De La Paz described the common profile for a young female.

“Most are chronic runaways or ‘throw aways,’ where the mom doesn’t even make a runaway report,” De La Paz said. “They have been sexually abused by a stepfather, have criminal history, and are around the age of 13 to 14.”

There are more victims that aren’t saying anything than are because they are set up not to report.

“The model is set up to make you too scared, that you’re worthless, and even if you do escape nobody is going to care or believe you,” De La Paz said.”

These difficulties force detectives to have to find these victims in other ways. One source is the Internet. It’s a double-edged sword for undercover detectives because it allows for immense data to be used against the perpetrator but tracking them down usually falls short.

Unfortunately you are closer to most victims than you think. They’re staying at the Holiday Inns, they’re buying snacks at the gas stations, and even shoplifting from Target.

“I got a call last week about a little girl down at the Target on Haskell and 75 shoplifting lingerie.” De La Paz said. “There were three adults, two women and one male, pacing outside wondering when are they going to release her. I knew something was wrong.”

The young girl caught with shoplifting for her pimps was only 15 years old. Most young females her age are sought out due to their vulnerability and placement. Men know where to look: malls, bus stops, places where kids would skip school, with other prostitutes, etc. and they greet these young females with the ‘good Samaritan’ approach.

The pimps offer to meet those immediate necessities: somewhere to sleep, eat and go. Those offers turn into a lifestyle.

“They say ‘you can stay with us one night’ and then one night turns into a week, a week turns into you’re going to have to leave if you cant put any money in,” De La Paz said. “Then they’re offering their bodies for money, being abused, and become hopeless.”

This circle describes how this process from vulnerable to hopelessness intensifies so quickly.

The more society is aware of these crimes and the more you can be on the lookout for signs of victims, the closer law enforcement becomes every day to saving another life.

Child protection and youth development consultant, Jonathan Cloud, laid out the four “buckets.” These buckets range from prevention to making sure a victim does not

relapse into the prostitution lifestyle.

Being aware of these buckets can help identify victims and potential victims, he says.

“What we have learned today would have taken up to six months,” Cloud said. “You now have achieved something to be proud of. You should feel very good about yourselves.”