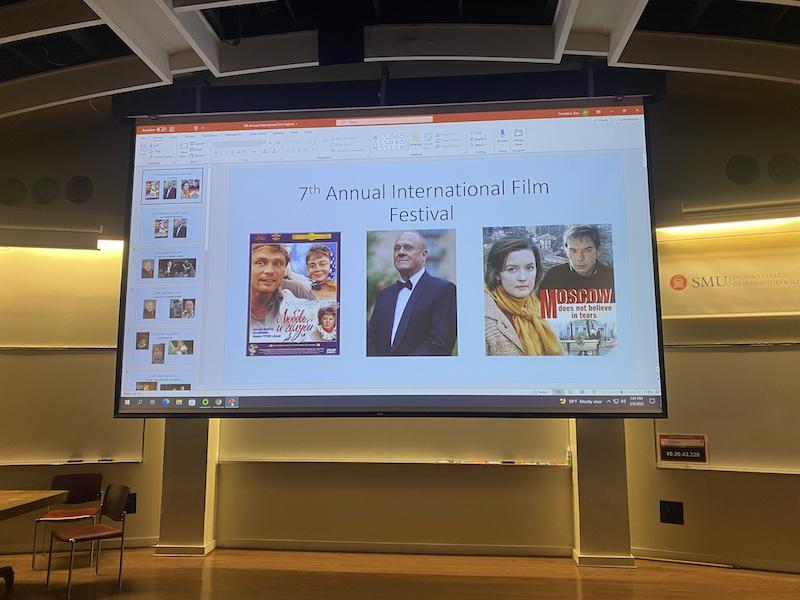 The sounds of Russian conversation echoed off the walls of McCord Auditorium in Dallas Hall late Tuesday night during a screening of “Love and Pigeons,” a Russian comedy, as the SMU World Languages and Literatures department kicked off their seventh annual International Film Festival.

Throughout February and March, several language departments at SMU will show films that celebrate their culture and relate to the theme of the festival. A small group of about 10 people showed up to the first night of the festival, but the 201-seat venue offers plenty of space for attendees to socially distance.

“Lyubov i Golubi,” which, translated to English means, “Love and Pigeons,” is a classic Russian film about a love triangle and one man’s journey to find his way back to his family.

“The topic of this festival is community and family,” Zimakova said. “The village in this movie is exactly that – their love and their way of life.”

“In Russia, you can hardly find a person who has never seen this film,” said Yuliya Kruchkova, a lecturer who teaches Russian and French at SMU.

Benjamin Feinstein, the president of the SMU Russian Club, said the selection of this year’s featured film came with even more intention.

“The director has been recognized by the Oscars and the Russian government,” Feinstein said. “He passed away from COVID last year, so we felt it was most appropriate to commemorate him through celebrating him.”

The SMU Russian Club consists of 200 current students, faculty and alumni. The organization is active, putting on year-round events open to SMU students. Prior to opening up the 2022 International Film Festival, the club hosted a screening of the Russian film “Gorbachev. Heaven” along with a Q&A session with the film’s acclaimed director Vitaly Mansky.

The festival continues Wednesday, Feb. 9 at 6 p.m. on the MPHS common lawn with a screening of “Dil Dhadakne Do” put on by the Indian Student Association at SMU. Unless otherwise noted, screenings for the rest of the festival are held at 7 p.m. in McCord Auditorium on the third floor of Dallas Hall.

The rest of the film festival will include films in: Hindi, French, Spanish, Italian, Arabic, Italian, English and Chinese. The festival is free and open to the public, but advance registration on Connect is requested for all members of the SMU community.