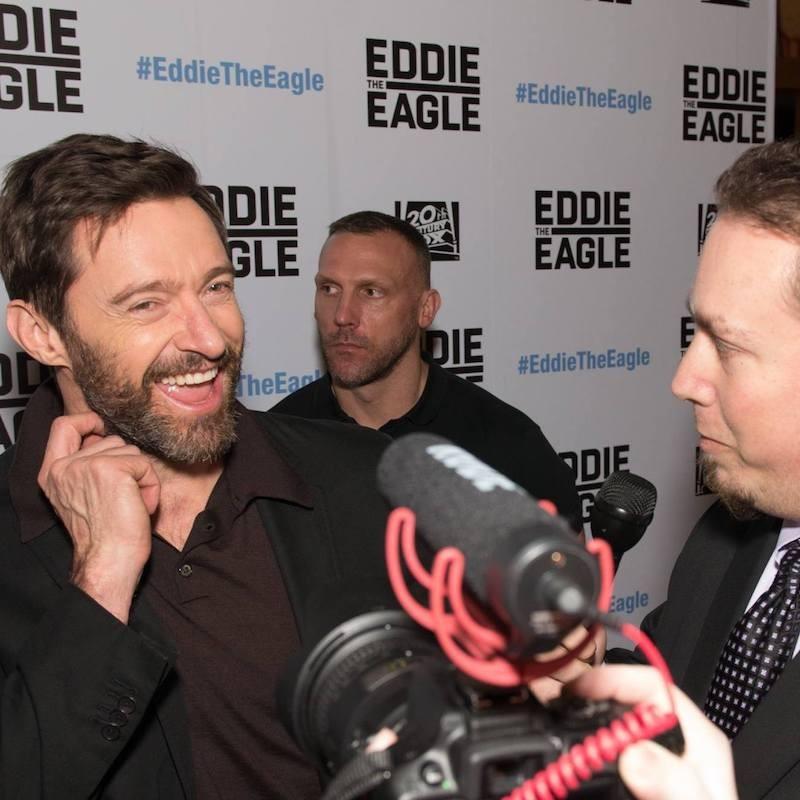 Gadi Elkon has turned what started as a hobby to “get free seats to movies and sports games” into a career as a masterclass figure of the red carpet at the young age of 34.

Even though he started as a sports interviewer at the University of North Texas, he eventually found himself face-to-face with some of Hollywood’s most critically acclaimed figures. The prolific Selig Polyscope Company editor-in-chief has interviewed high-profile figures such as three-time Oscar-nominated actor Johnny Depp and two-time Oscar-nominated director John Singleton.

Elkon’s interview techniques transcend the general formula of asking the same question the “guy in front of you just asked.” Instead, he brings out answers not often heard from members of the film industry.

Starting at KNTU, UNT’s main radio station, Elkon realized that radio alone wasn’t his thing, but sports broadcasting might be.

He joined the UNT sports interviewing team while double majoring in film and radio, interviewing athletes from the collegiate level to major leagues. However, even after interviewing top-class athletes like Dirk Nowitzki and Alex Rodriguez, Elkon could not fathom how awfully athletes handled interviews.

Their ‘by the numbers’ responses and standoffish behavior diminished Elkon’s interest in sports broadcasting, he says, galvanizing him to pursue another form of interviewing.

When recalling this transition from sports to film, he thinks back to his interview with athlete Alex Rodriguez.

“He wouldn’t even look me in the eye,” Elkon said. “He had no respect for the interviewers present and their field of work. Even when I would throw him an off-the -wall question like what pair of shoes he’s planning on getting next, the guy would barely look up at me.”

Although Elkon adored interviewing people and “loves sports more so than film,” he needed the right medium for his unique style. He distanced himself from sports broadcasting to focus on film. He interviewed actors, directors and others involved in the film-making process. What proves most interesting about Elkon’s interviewing style is that he approaches every interview with the same attention to detail and research, no matter the subject’s fame or obscurity.

For celebrities like Johnny Depp, Elkon knew he needed to represent the ‘odd man out’ of every interviewer on the red carpet, asking questions that would catch Depp off-guard to elicit some personal and unusual details.

Extensive background research on Depp’s former avant-garde interviews make up Elkon’s main ‘toolbox’ when approaching the interview, he says. However, Elkon admits that lower profile subjects “tend to offer deeper and more interesting answers than someone of a higher profile like Johnny Depp would.”

Elkon always refers to his interview with John Singleton at the Austin Film Festival as a keen exemplification of his methods. Singleton embodies a general distaste for interviews; knowing this, Elkon prepared a set of backup questions.

Through research, Elkon knew that Singleton adored college football and that his favorite team was the University of Southern California Trojans. Elkon loaded himself with trivia about the Trojans so he could recover from an awkward moment with USC-related questions if needed. When things eventually went south in the Singleton interview, Elkon followed his backup plan and Singleton’s eyes “lit up with amazement, completely changing the direction of the interview.”

When Elkon interviewed Singleton again at MegaFest 2017, Singleton remembered Elkon from their interview at AFF two years prior due to the USC question. During the interview, Singleton told Elkon about a new project he was working on, which would eventually become known as the American crime-drama series “Snowfall.”

At the time, no one knew about the project, so Elkon’s interviewing methods had landed him exclusive news about a previously unknown program. This prowess in interviewing encompasses what brought him to SPC by chief executive officer Dev Shapiro.

Shapiro acquired SPC from the Selig family, who had owned the company since its foundation in 1896 at the forefront of motion picture production companies.

After his time working with the Dallas Arts District, Elkon began under the wing of Shapiro as an apprentice. Together they took the company to new heights.

Although these big-name film festivals reflect good business, Elkon prefers to operate at smaller film festivals. He believes it “gives him more range to have a better time with his subjects and get better answers and more worthwhile interview moments.”

More unknown subjects are often attributed as the future of the movie industry, so it’s a tactical move to get an early look at a potential prominent figure to establish a first look at their mindset.

As Elkon put it, “Jake Gyllenhaal was just a kid who liked Stanley Kubrick. Everyone starts somewhere.”

At smaller film festivals, a bigger chance presents itself to be surprised by special guests, Elkon says. He recalls a time where he joined many at Oxford Film Festival in Mississippi. Out of the blue Danny Glover showed up unannounced. Elkon got some time with Glover and some interesting comments on the direction of Glover’s career as he looms near retirement.

Elkon believes that instead of going through the motions and letting professional interviews follow the same formula, one should bring a new take to the table. This reflects what will open up actors and filmmakers alike with the press and not hold the same negative opinion many hold toward the media and press.

Elkon summarized where he thinks he will continue in the next five years working with SPC: “I’m going to keep swimming against the current, keep up with what’s gotten me this far.”

His advice to future journalists and interviewers is for not limiting your life’s work to being ‘an interviewer.’

“Keep it broad but be bold with that broadness,” Elkon said. “No one is going to say no outright, they’re going to give you a chance to do whatever you need to do. People wall you off after you do something to provoke them to. Learn from your mistakes and experiences because it’s what everyone goes through. Never settle for what the guy in front of you is asking. Be the person no one wants to follow up.”