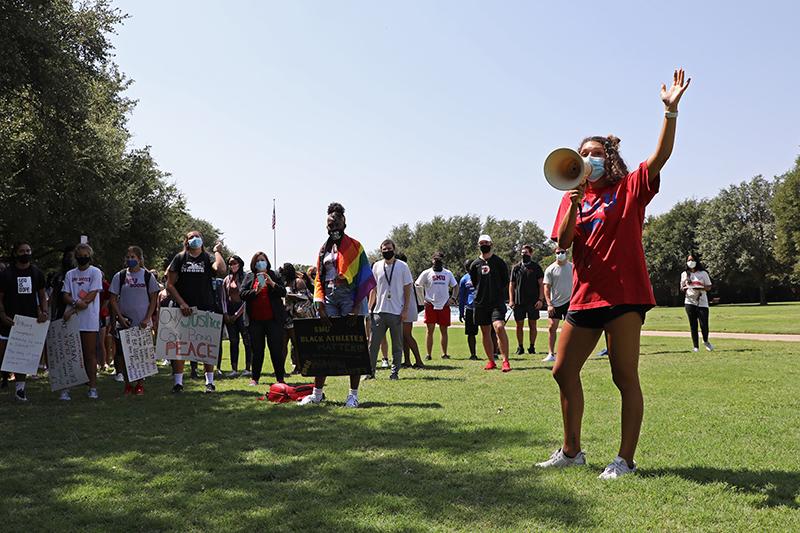 Editor’s Note: This story was reported by Sriya Reddy and Kevin Reynolds

Over 130 members of the SMU community joined together to march from Dallas Hall to Loyd All-Sports Center and back. President Turner, along with RaSun Kazadi, SMU BSAC President Bri Tollie and Vice President Ashton Woods spoke at the demonstration in support of the Black Lives Matter movement. Other participants of the protest included SMU’s new Chief Diversity Officer Maria Dixon Hall and Vice President for Student Affairs Dr. K.C. Mmeje.

“I’m out here today because I think it’s important that we support our student athletes and raise awareness for social justice and reform,” Mmeje said. “Our student athletes, just like students across the country, realize that they have a platform and they have a voice. It is important for us to support them as they advocate for change on campus.”

The demonstration was organized the night before while football and basketball players messaged back and forth about the shooting of Jacob Blake, an unarmed Wisconsin man who was shot seven times in the back by the police. Woods and Atipa Mabonga, who does public relations for BSAC, immediately created a flyer to circulate and contacted multiple student organizations to get the word out.

For Mabonga, protesting is a way to have a voice on campus.

“For me personally, it’s important, because this is a reality,” Mabonga said. “I think it’s so easy to see things on the news, and think ‘Oh, this doesn’t affect me.’ It was so important today to be protesting because I knew that my classmates will see me, my teammates will see me and I’m fighting for my life on my school campus.”

SMU men’s basketball player Feron Hunt, who was another main catalyst for the protest’s creation, echoed Mabonga’s reasoning. He noted the importance and impact of having hundreds of student-athletes at the event, and commended Turner and others for showing up.

“We just put people on notice of what is going on because there is a lot of police brutality and social injustice,” Hunt said. “It speaks volumes [that some many people were out here].”

At the end of the demonstration, Woods used a megaphone to address the students standing on the steps of Dallas Hall. She told them to use their voice and use their platform, and insisted that everyone can do better and do more.

“It’s important to protest right now because there’s a huge population of people in our nation who are not able to live the same experience as other Americans simply due to their skin color,” Woods said. “We, as athletes, SMU students, SMU faculty, SMU admin all have a platform to use our voices to fight that injustice, and it starts in our own community.”

Tollie and Woods started BSAC this summer to give Black student athletes more representation on campus. They realized their voices would be most effective if they organized together.

“We decided that the best way to ensure that we can continue to push for the change we need to see, we needed to become organized so we could mobilize,” Woods said. “We also feel that as black student-athletes it is important for us to create and develop an identity separate from our sport, which is what we hope to develop through the BSAC organization.”

BSAC is encouraging students to participate in another protest organized by SMU Black Lives Matter on Saturday, September 5. The protest is scheduled to begin on campus at 3pm.