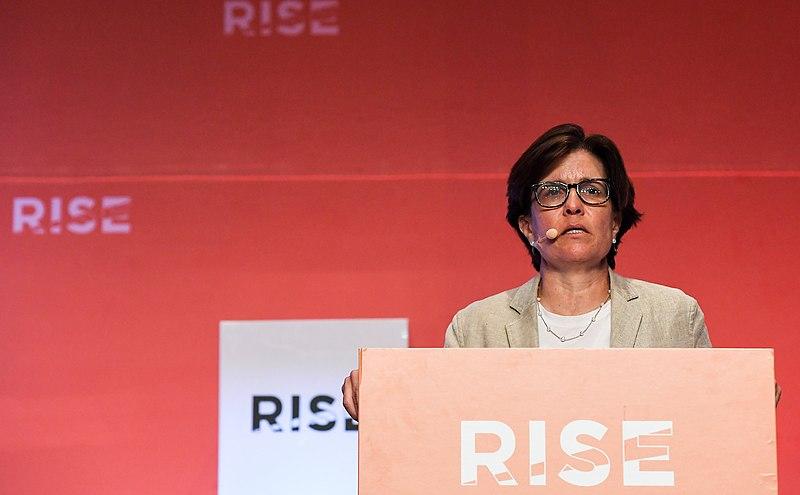 Kara Swisher began Tuesday night’s Tate Lecture with a grisly prediction she made in 2019 about former President Donald Trump’s reaction to losing the election.

Speaking from her studio in Washington D.C. where Swisher hosts her technology-focused podcast, Pivot, she recalled a hypothetical scenario in which Trump would use Twitter and other platforms to spread misinformation about election fraud and incite his supporters to rise up in armed insurrection.

Swisher said many of the social media executives she gave this scenario to agreed that throwing Trump off the site was the solution while others would temporarily suspend his account or do nothing.

Swisher, who also serves as the executive producer for Code Conference and contributes for The New York Times, attributes her ability to predict this outcome to her ability to observe what she saw as disturbing trends with not only Trump, but the way in which he was allowed to use social media sites.

She said that this nearly unfettered use of these sites was exactly what Trump was looking for and why he enjoyed using sites such as Twitter, Facebook and YouTube.

“When he [Trump] was in office, he was allowed to violate the rules and norms in place on most of these social platforms,” Swisher said. “He liked these platforms because compared to the media, it was unfettered access to the people he wanted to reach.”

While Swisher supports free speech and open dialogue, she believes that it is time to come to reckoning with the concentrated power the major technology companies possess.

Swisher also spoke about the need for innovation and how to address the problems posed by the power of tech companies.

“They are the makers of most of the tools we use daily, and are critical to operating in the modern world,” said Swisher. “Unfortunately, much of their effect of late has been deleterious and a big question for the next few years is how we can innovate as power becomes more concentrated than ever.”

She said that in the United States, there is no general “Internet Bill of Rights” which would protect privacy, data and consumer use. The lack of regulation gives the tech companies of the world vast latitude as to what they can do with your data.

“The only group who is not regulated in any significant way in this country is the tech companies,” Swisher said.

This is because many companies hide behind Section 230 of the Communications Decency Act of 1996 which helped protect online forums from being sued out of existence for material published on their platforms.

Swisher says that the broad protections from CDA 230 is a good for when these companies are smaller, but it might be time to rethink how the regulation exists now that the companies it protects are among the most powerful in the world.

Kathryn Chavez, a senior at Southern Methodist University triple majoring in business management, fashion media, and advertising, watched the lecture and agreed with Swisher that there needs to be more accountability for how these forums are used.

Chavez said that these companies aren’t moving fast enough when it comes to keeping voices of misinformation on their sites.

“It took too long to get Alex Jones off of Twitter,” Chavez said. “There are some people, such as U.S. Rep. Marjorie Taylor Greene (R-GA-14) and U.S. Rep. Lauren Boebert (R-CO-3), who are on these sites, but maybe shouldn’t be.”

Chavez said that these people may be bad, but they are effective communicators using the tools of the day to spread their message. She still agrees with Swisher that there is room for improving the protection these online platforms are afforded by CDA 230.

All this ties back to Swisher’s point about the lack of regulation, or at least a lack of good regulation.

“There is no national privacy bill, no national data bill. These companies can do what they want in lots of ways,” said Swisher. “It is really remarkable that there are laws in other countries that are much better than our own, even though most of the companies are U.S.-based.”

Swisher says that citizens need to push the government to adopt this greater regulation. This starts with a more aware citizenry about the issues the technology we interact with daily affects us both positively and negatively.

“We have to think really hard about a way to get control of technology that is good for humanity, you family and yourself,” Swisher said.