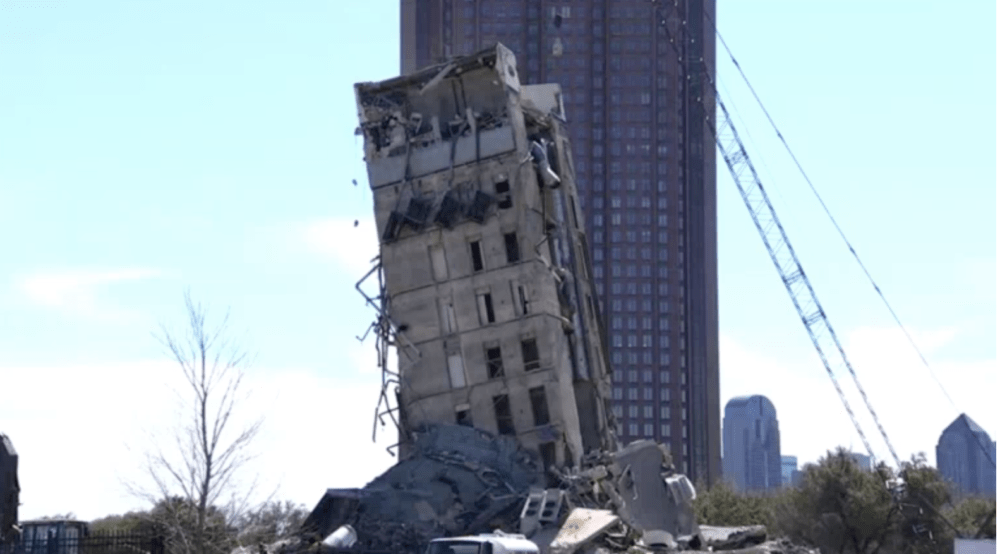 After a detonation gone wrong last week and two days of demolition, the Dallas skyline gained an accidental tourist attraction — The Leaning Tower of Dallas.

Only the elevator shaft still stands of an old 11-story office building that is now leaning at a slight angle, according to a CNN report. The leaning tower has sparked controversy in the city of Dallas with regards to whether or not the building should be taken down.

“I think it’s interesting and a cool story to tell so we should leave it as a tourist attraction,” SMU student Kelly Riggs said.

However, sophomore SMU student Julia Kramer, she was more concerned from an environmental standpoint.

“I don’t know why people would want to keep it up,” Kramer said. “It’s taking space of a property that could be actually put to use or be a space to let plants grow.”

An online petition has been created to ask city officials to save the leaning building. The petition has gained more than 1,400 signatures and is gaining more by the minute.

“We need to act FAST!” the petition says. “We need to reach out to local officials to save our new historical landmark. You wouldn’t tear down the Leaning Tower of Pisa or the Great Pyramids of Giza and replace them with condos, would you?”

Social media is overflowing with selfies and posts regarding the Leaning Tower of Dallas. The hashtag #leaningtowerofdallas is popular on Twitter. Many users argue that the building should stay and become a part of the Dallas skyline for good.

Maybe we should just keep it like that? #leaningtowerofdallas is kinda catchy! https://t.co/eT6nZUsazf

“I feel like the new area will put money into Dallas, but it stinks that it is being torn down from the skyline because it added a unique touch to it,” SMU student Michael DeWeese said.

Despite the Dallas residents’ effort to save the leaning tower, it is set to be fully demolished. The city brought in a construction crew on Monday morning to get rid of the building. The wrecking ball used seemed small compared to the leaning building, but was 5,600 pounds because of the Occupational Safety and Health Administration regulations, according to The Dallas Morning News.

The destruction will take place over the course of three to four days as crew members work from the top of the tower to the bottom.