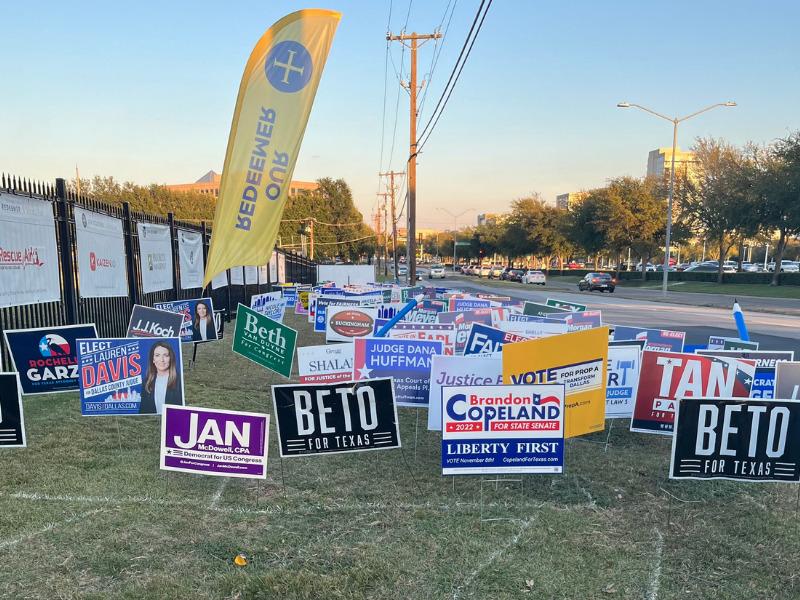 Like most college students, Matthew Merritt, a 21-year-old at SMU, has class on Election Day. So he voted early during a recent weekend at the polling location at University Park United Methodist Church.

“I did not want to deal with the hassles of trying to rush to the polls,” he said. “I know I need to exercise my right to vote so I thought today [Sunday] would be the perfect day.”

Lines were short, or non-existent at times.

Early voting has been unexpectedly slower in Dallas County, just as it has been across Texas, disappointing politicians and election observers who are relying on divisive issues to drive higher turnouts.

Voters have little time left. The last day of early voting is Friday. Election Day is Tuesday, Nov. 8, where students will have a chance to cast their ballot on campus at the Hughes-Trigg student center

About 198,000 people voted in Dallas County during the first week of early voting, according to the Dallas County Elections Department.

Early voting turnout has been lower than in previous election years, according to the Texas Secretary of State’s Office. As of Nov. 1, 19.3% of registered voters cast their votes, compared to 35.7% in the 2018 midterms.

Early voting was a great option for Mary Magers, who came to vote during her free time on a recent Sunday at Our Redeemer Lutheran Church on Park Lane in Dallas.

“I have children and I work,” she said. “I feel like everyone was super helpful, they were great and it was super easy.”

As of Nov. 1, more than 14,500 ballots were cast at the polling site at Our Redeemer Lutheran Church in North Dallas, making it among the busiest polling places in the area, according to the Dallas County Elections Department website. More than 260,000 early voters made it to the polls in Dallas County as of Nov. 1, according to website.

“The weather seems to have been an issue (the first week of early voting),” said Stacy George, 54. “The rain has likely kept people from coming out and voting.”

Many who have already cast their ballots came early because they feel strongly about this election’s issues.

After incumbent Texas Gov. Greg Abbott signed the Heartbeat Bill into effect last year, many Texans have been waiting for this election to cast a vote they hope will help repeal the law. With several key state and national positions up for election, voters have been eager to exercise their right to vote.

Barry Podesta, 79, decided to head to the polls and vote early to fight against anti-abortion laws after the Supreme Court overturned Roe v. Wade this year.

“I want to ensure the women in all our lives feel protected and have authority over their decisions,” he said. “I have six granddaughters who have completely altered my perspective of everything.”

Another issue that concerns Texas voters is the southern border. While federal and state lawmakers continue to disagree on the best way to handle immigration and border control, Texans living near the border seem to be directly impacted. Some voters have drawn a correlation between the current state of the border and the increased presence of lethal drugs.

“Drug smuggling, [at the border] specifically has made Texas feel unsafe,” Hale said. “My 12-year-old daughter has even asked me what fentanyl is.”

The national economy and the impact state laws can have on Texans is another pivotal issue during this election cycle – and potentially in election cycles to come. In a typically conservative state, Texans, and their businesses, currently enjoy no corporate or personal income tax.

Business owner Chad Morris, wearing a t-shirt that reads “Don’t Mess with Texas,” cast his ballot during early voting because he would be traveling for work out-of-state on election day.

“Jobs and the economy – as well as inflation,” Morris said, explaining why he felt it was important to vote in this election.

Nick Ragland, 27, also voted early mainly because of the economy and taxes.

“Voting in there was pretty simple, I just clicked and kept going,” he said.

With new machines this year at polling places across Dallas County, volunteers must be ready to help voters understand the new technology.

“Well, it’s a little more confusing this year,” said Teresa Thrash, an early voter at Our Redeemer Church. “But there were people there to walk you through it, and they were helpful.”

Polling places will be open for early voting from 7 a.m. to 7 p.m. through Nov. 4. Go to the Dallas County Elections Department website, to find your nearest early voting location.

On Election Day Nov. 8, polls will be open from 7 a.m. to 7 p.m. at the Hughes-Trigg Student Center or go to any of the other area designated voting locations.