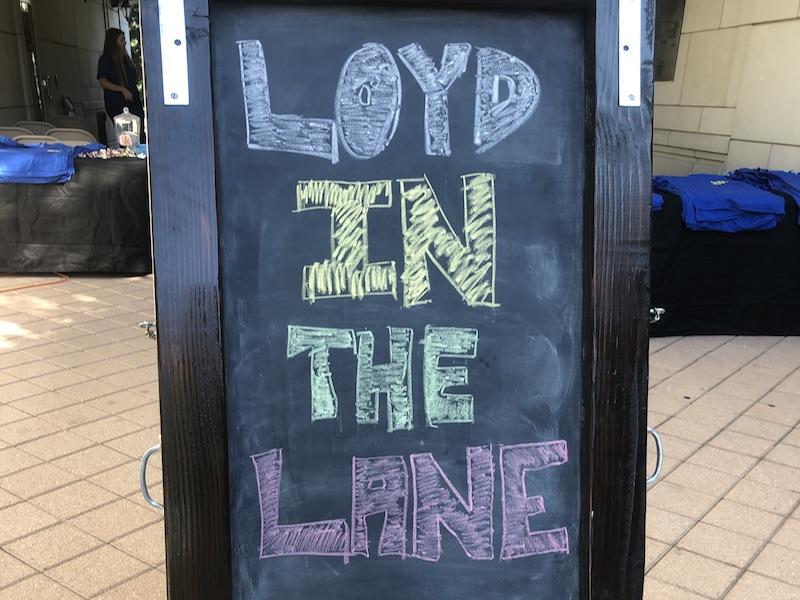 The 9th biannual Loyd in the Lane at Loyd Commons on Sunday afternoon featured four live TedX speakers. They emphasized the importance of opening up to strangers, managing biases, and serving the community.

Audience member Kennedy Hayes said she enjoyed the varying perspectives each speaker had to offer.

“My favorite part was hearing how different the themes of each speech were but how they all had the common thread of supporting and encouraging others and yourself to be the best person you can be, growing every day,” Hayes said.

Darian Taylor, Student Body President and speaker at the event, believes people need to shift the way they approach others they don’t know, especially on campus.

Taylor told the audience about his struggle with sickle cell anemia after passing out in 7th grade during a track meet.

Taylor urged the audience to look at others, not as strangers, but as people who have the potential to become friends.

“When we walk around campus and we see each other, we really only see one aspect of a person, Taylor said. “But I really want to encourage you to dig deeper and to find out who people really are on this campus.”

Another speaker, Economics Professor Dr. Elizabeth Wheaton related her textbook, The Economics of Human Rights, to the economics of hate.

“Economics of hate looks at bias,” Wheaton said. “Hate is a bias on a huge scale. A person who chooses to hate is looking at a group and saying, ‘What are my benefits from hating that person?’”

Wheaton said that changing these biases hinges on shifting people’s perspectives and their choice to hate.

“We’re also looking for incentives,” Wheaton said. “How can I change your choice? How can I decrease the benefit to you of having that hate?”

“The authentic you is something that does change, and you’re the one who pushes that change,” Fennig said. “How do we mark this kind of change? We celebrate birthdays. When we are young we get taller, and when we get older we get shorter.”

Fennig said people are changing biologically all the time, but they go through character changes in a more subtle manner.

“We can find out what we value by how we serve other people, how we serve our community,” Fennig said. “You can also discover who you have become, because you never know how a moment of volunteering is going to change the direction you take.”

With their tagline, “Homeless, not voiceless,” Dallas Street Choir aims to give homeless people a platform to engage in musical performance to change how others typically view them.

“It’s really important that we identify a scope of what homelessness is perceived to be,” Palant said. “What we’re trying to do in the Dallas Street Choir is to put a face to homelessness that is more than just lazy or poor.”

Whether it is through Dallas Street Choir or some other form of philanthropy, Palant believes it is important to take part in service to help shape the character of who you are and who you want to become.