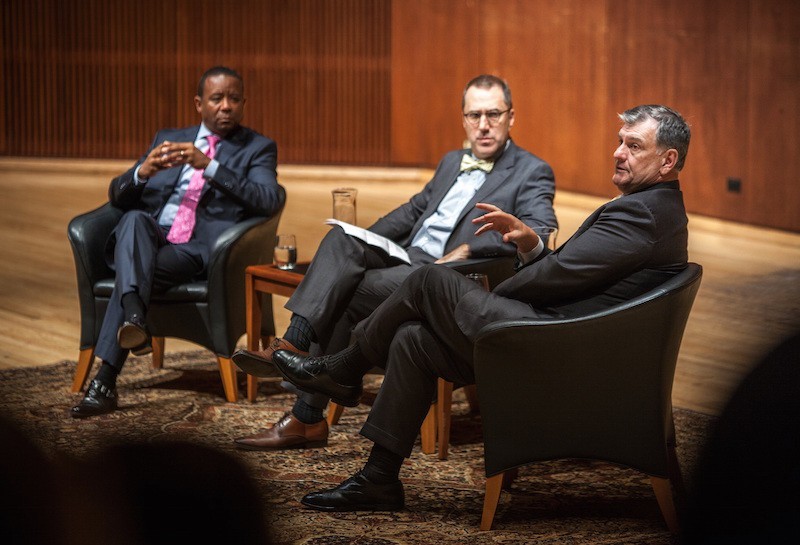 By Kay Rodgers and Jacquelyn Elias

Mike Rawlings, mayor of Dallas; Mike Wilson, editor of The Dallas Morning News; and Steve Pickett, a lead journalist for CBS 11 News, served on a panel for the 2016 Sammons Lecture on Oct. 19 discussing the ethical issues behind the Dallas media’s coverage of the Dallas ambush on July 7.

Mark Hughes, a man with an unloaded rifle at the protest who was wrongly identified as a “person of interest” in the shooting, attended the lecture, asking the panelists during a Q&A session at the end why he specifically was identified instead of the others present with weapons at the protest.

Rawlings explained that immediacy was key to find the alleged shooter to protect the public, and at the time, he was the first individual to be identified with a rifle.

“A decision was made to put it out as a person of interest,” Rawlings said. “We were thinking ‘We gotta get this bad guy.’”

Rawlings and Hughes shook hands at the end of the lecture.

Other issues discussed included public safety, attribution, personal bias and the balancing between immediacy and accuracy.

“All of us on the panel understand that July 7 was ultimately about the officers who lost their lives,” Wilson, the moderator for the night, said. “But I think there are some things to be learned.”

This free and public panel began at 8 p.m. in Caruth Auditorium within the Owen Arts Center. Over 200 students from the journalism, fashion media and various other departments, professors as well as community members attended the event.

The panelists began the night by sharing their individual experiences on July 7. Mayor Rawlings said he was dealing with a death in the family on the day of the shooting.

“The Rangers game was on, and I grabbed a tuna fish sandwich and just sat there for a while,” Rawlings said.

According to Rawlings, he received a call minutes later confirming that two Dallas police officers had died in the attack with the shooter still at large.

“At that moment you knew this was a serious night,” Rawlings said solemnly. “At the same time, your soul is crying because you know five lives have been lost, and it’s our job to go to families.”

For Pickett, the events of July 7 began much before the shooting occurred. Pickett reported on the protest since 10 a.m., speaking with several organizers such as Dominique Alexander to report the true intentions of the Black Lives Matter protesters. According to Pickett, the organizers were concerned no one would show to the protest at all.

“I remember them asking me ‘Steve, if we get 30 people, what should we do? Should we still march?'”

When Pickett turned on his TV later that night to see if anyone had actually shown up, he said he was shocked and confused by what he saw.

“My first thought was ‘There’s someone white who is upset about these protests who has gone downtown and shot these protestors.’” Pickett said.

Williams also initially expected a white assailant, he said. Rawlings agreed, adding that it was “just a fact” that mass murderers are usually white men.

“The temptation to impose your assumptions on what this might be is your greatest enemy,” said Wilson.

In addition to paying attention to personal assumptions and bias, Pickett also explained his caution in addressing the assumptions that the general public may make when listening to the media report.

“We had to make an effort to make the distinction that the act against the officers wasn’t tied to those individuals,” said Pickett.

Other ethical concerns discussed Wednesday night included issues of authenticity and attribution. According to all three speakers, the pressure to deliver accurate information as quickly as possible created several ethical dilemmas.

“If we say there is a shooting happening in downtown Dallas, we better be right,” Wilson said. “It is important to be first. Not critical, but important.”

For Pickett, his primary concern was making sure they had a reliable source they could attribute information to. Throughout the discussion, Pickett repeatedly mentioned the importance of attribution, urging the journalism students in the room to remember that “attribution in reporting is key.” According to Pickett, he had received a call that night from someone he calls a “reliable source”. When asked by Wilson why he didn’t report the information immediately, Pickett had a simple answer.

“The general rule is to have at least two to confirm,” Pickett said. “My source was credible, and I knew this. But one person can be wrong.”

Rawlings said his primary dilemma was deciding how much information to release to the public at what times while dealing with the emotionality of the situation. He also said that he had to balance with duties to the DPD with his duty to the citizens of Dallas.

“Do I build this relationship during this tough time or give people as much information as I have?” Rawlings said. “I decided we would do this together, mayor and chief. I think in the long run it worked out.”

SMU Belo Distinguished Chair Tony Pederson introduced and moderated a Q&A session at the end of the panel, which was when Hughes addressed his question. Other attendees asked what security was offered to students in El Centro College when the shooter was suspected to be there.

Many students stayed behind after the lecture to ask questions to the panelists.

The 2016 Rosine Smith Sammons Lecture in Media Ethics marked the event’s 17th year. The lecture is funded by an endowment from the Rosine Foundation Fund of the Communities Foundation of Texas, by the encouragement of Mary Anne Sammons Cree. This ethics series is named after Cree’s mother, Rosine Smith Sammons, who graduated from SMU in the 1920s with a degree in journalism.