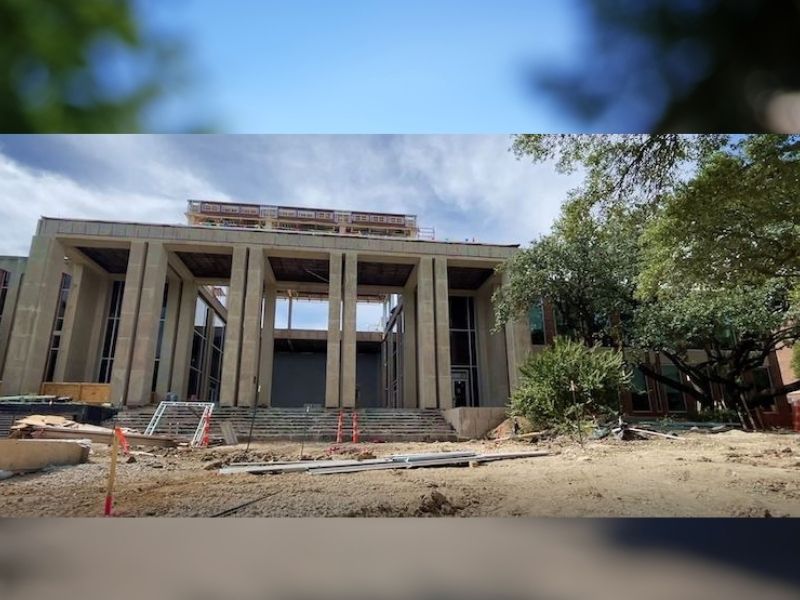 Students have been navigating the effects of the Meadows construction for two years. Watch this video for an inside look at how the project is going.

Watch this video to see the current state of the building as opposed to the rendered end goal.

The construction on the Owen Arts Center is set to be completed by Dec. 20, 2021. This $34 million project began in late 2019. Two years later, the work is still underway, but the building is starting to shine through the rubble.

Chase Rabel, Project Engineer at CORE Construction: “This whole space will just be all open. We’re gonna demo out these current windows, these walls behind you, this whole lobby will be one big open space and a lot less closed off.”

The project has 2 primary goals: improving the northern wing and making entrances more grand and accessible.

Rabel: “This is one of the new ADA wheelchair ramps we’re adding just to make the building more accessible”

Some students say the construction has affected the learning environment in Meadows.

Darby Hillman, Masters of Fine Arts Student: “It’s taken away from that ability to kinda breathe and stare out the window, which is a really important part of an artist’s process.”

There have also been multiple construction-related gas leaks that cause the building to be evacuated, interrupting classes. CORE construction employees say they strive to minimize the effects their work has on students’ learning.

Rabel: “We do not want to disturb the classroom or the students’ space.”

CORE limits construction work in centralized, indoor locations to the nighttime to reduce the amount of noise they make.