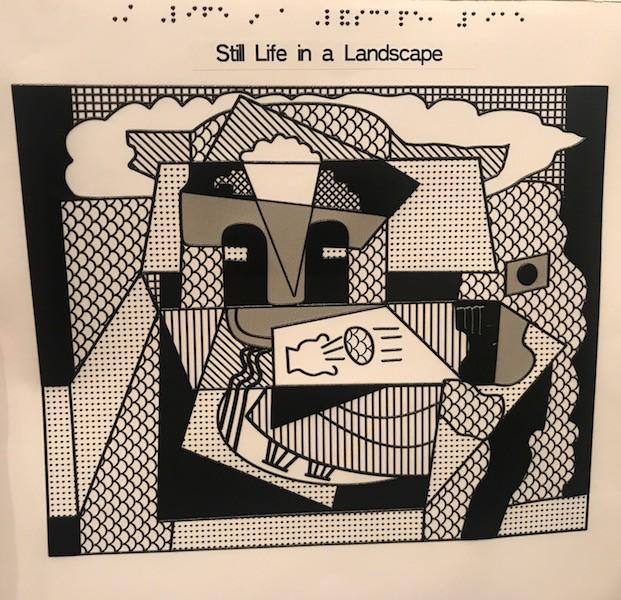 An intimate group of 10 Meadows Museum visitors had the opportunity on Saturday to see past the visual in visual art and experience works of Pablo Picasso and Diego Rivera using all of their senses.

The event, called INsights & OUTlooks, involves people from all artistic backgrounds and caters to the seeing impaired through the use of innovative teaching aids. At Saturday’s session, the lecturer presented real-life examples of intriguing objects found in the paintings, such as unique glassware and obscure liquor, which viewers could touch and smell. The result was an immersive event that used discussion and sensory stimulation to provide insights into the works of art.

For Liz Sankarsingh, who is pursuing her Master of Liberal Studies at SMU, even though she is not vision impaired, the event still gave her a new confidence in interpreting modern art.

“I went from being afraid of looking at this kind of art because I didn’t think I got it, to having an appreciation for it and how it can connect personally with me,” Sankarsingh said.

Four modern paintings of the 20th century were highlighted: two by Picasso and two by Rivera. The paintings included abstract, thought-provoking images that caused viewers to question their meaning.

Director of Education at the Meadows Museum Carmen Smith led the discussion and encouraged viewers to share their interpretations.

“Meadows Museum has a mission to increase the inclusivity of its programs,” Smith said. “This program beautifully folds in because I think that the approaches and skills that we use in these gallery discussions are not only inclusive but relevant to a really wide audience.”

Smith accommodated all types of learners in her presentation. For one Picasso, entitled Still Life in a Landscape, Smith handed out textured prints of the work, which would allow the visually impaired to gain a deeper understanding through touch. Even though there were no visually impaired visitors at this particular session, these tactile prints were very helpful to every audience member, because they clearly defined the arrangement of the space in the painting.

Kayle Patton is an education coordinator at the Meadows Museum who joined the discussion. Patton noted the value of this program to all SMU students because it prompts them to apply previous knowledge to help understand unfamiliar topics.

“Thinking about the different ways that we approach a work of art is something that all students should understand,” Patton said. “Because that sort of critical thinking and approaching things from different perspectives is helpful in whatever you’re learning, not just in art.”

On this thread, Smith encouraged participants to interpret different aspects of the painting using their own insights, which she then expanded upon with her research and findings.

Smith then presented a series of objects to the viewers, such as a bottle of Anisado that was presented in an abstraction in one of the paintings. Seeing, touching and smelling the real thing and comparing it to the abstraction gave this modern interpretation more context and clarity.