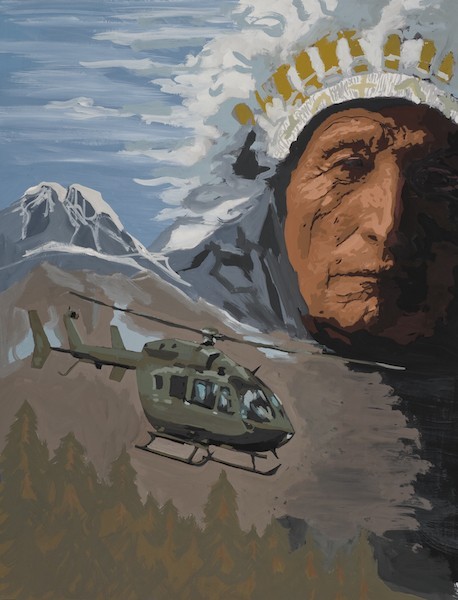 David G. Smith’s worlds collided when he received an email last fall about an art contest. Airbus Helicopters Inc. wanted a piece that honored the people for whom the UH-72A Lakota was named.

“I expected it to be something I was doing just for myself because of the fact that it spun everything together in my world,” Smith said.

But then, he won the contest.

“It’s almost a god-like image sitting up there in the mountains,” Cox said.

Eagle Elk’s descedents flew from South Dakota to meet Smith and attend a ceremony September 2016 at Airbus Helicopter’s headquarters in Grand Prairie. The ceremony honored the helicopter and painting.

“This is an honor for our family. We are all deeply touched,” great-granddaughter Charleen Eagle Elk said.

Eagle Elk’s grandson, Robert, blessed the Lakota helicopter during the ceremony in his native tongue.

Smith, 46, spent nine years in the Army and 12 years flying Airbus helicopters in the Coast Guard. After retiring in 2014, he enrolled at SMU to pursue degrees in creative computation and studio art. Rather than continuing to fly helicopters, Smith wanted to use his GI benefits to get out of his comfort zone and study art.

“Life is short and you have to try new things,” Smith said. “It didn’t sound interesting to me to hang around and do what I’d already been doing for 20 years.”

“I have some really great professors,” Smith said. “They are here to create opportunities for me so I’m really grateful for that.”

The veteran, credited with saving 20 lives during his time in the Army and Coast Guard, now paints in his studio in the Owen Art Center and admits to getting emotional over the Lakota peoples’ acceptance of his work.

“Robert Eagle Elk even said that he thought Eagle Elk would be watching over me for the rest of my life,” Smith said.

Smith said he and his wife Jennifer are going to South Dakota this summer to attend the Eagle Elk family reunion.

When asked about his next art project, Smith laughed and pointed to a giant, blank canvas that took up most of the space in his studio. He did not have a clear idea of what his work was going to look like yet. He did know, however, he wanted to continue working on very large pieces and possibly paint murals on buildings some day.