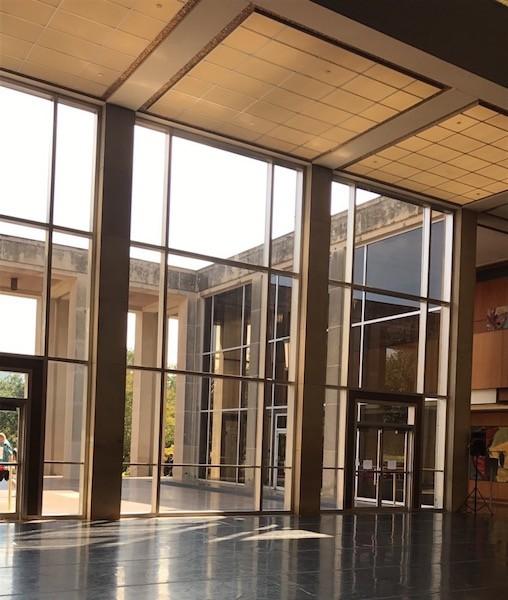 Every afternoon, Jennifer Nelson, a double major in dance and advertising, sits in the Meadows atrium, eating a snack while completing her advertising homework before a long night of rehearsals. While most students end their school day in the afternoon or early evening, Jennifer may be in the dance studio until 11 p.m., rehearsing for the numerous performances she has in a semester.

Nelson, a fifth year senior and transfer from Bucknell University, knew when she chose Meadows for both of her majors that she would be committing to an extra year of undergraduate work.

“When I was told that I was accepted into the creative advertising track, they told me right away that it would take another year to graduate,” Nelson said. “It took me a long time to accept the fact that I’d be doing an extra year of college, but I think that in the end, it will really benefit me.”

Many students in the Meadows School of the Arts must carefully weigh whether they should pursue a second major, since many of the school’s creative and performance tracks require so much dedication and time. Just completing one major can be tough enough.

Only about 40 percent of Meadows students double major according to statistics compiled over the past three years. About 80 percent of SMU students receive either a double major, a minor, or more than one minor.

Some Meadows students take on the challenge of a double major to increase options in their professional careers. Others find that minoring in another area provides sufficient access to another career path while still allowing flexibility in their schedules. The nature of the students’ primary major significantly influences these decisions because some professions in the performing arts industry provide limited career length and variety.

“The subject of the choices a student makes regarding their academic path is complex,” Meadows Associate Dean for Admissions and Enrollment Management Corinna Nash-Wnuk said.

Sophomore and international student Danqing Zhang is pursuing majors in economics and studio art, with minors in arts entrepreneurship and creative computation.

Zhang is pursuing this ambitious four-year plan so that she can have a variety of options in her two passions: economics and art. While her goal is to complete both majors and minors, Zhang acknowledged that she may have to drop one of the minors to graduate on time.

“Because I’m interested in a lot of things I’m taking courses in all different fields, so that’s taking me a lot of time,” Zhang said. “I have to try to finish in four years, because I’m depending on my scholarship, and if I want to study abroad that may also require me to drop one minor.”

Grace Adams is a sophomore dance major still deciding whether to double major in advertising.

For Adams, the rigorous dance curriculum has impeded her ability to take necessary prerequisites for the advertising major. Specifically, the lack of flexibility in selecting dance classes has been a continuing issue, since each class has only one section and is only offered certain semesters.

“I want to try to get into the advertising school, but since I’ve been here I haven’t had any time to get the survey class in for advertising, and you need that class to get into any of the other classes,” Adams said. “I think that minoring would be easier on my schedule but I’d like to major.”

Even some Meadows music majors who can expect longer-lasting careers double major to allow variety in their future professional paths.

Emily Killinger is a junior music therapy major whose primary passion lies in music therapy and education, but she also has a passion for performance.

“Ideally, I’d love to have a career practicing music therapy or teaching it at the university level while performing concerts,” Killinger said.

Killinger concedes that taking on the rigorous course load attached to a double major in Meadows is a commitment, but she feels like the school has helped her assume this challenge.

“The professors in Meadows are exceedingly supportive and driven to see students succeed, which I think also makes a huge difference,” Killinger said.

Killinger’s desire to hold multiple jobs in the performing arts world and in education is also supported by U.S. Department of Labor data, which shows that about one-third of music professions are secondary jobs.

SMU Meadows Admissions doesn’t hide the fact that double majoring in Meadows is a challenge. Nash-Wnuk advocates for transparency.

“We typically encourage prospective students to speak with current students who are double majoring to get a strong sense for what it is like and to get information regarding their other major of interest directly from the school that it is in,” Nash-Wnuk said.

Kimi Rose is a journalism major pursuing minors in European studies, fashion media and advertising. Rose said pursuing multiple minors rather than a second major gives her more scheduling flexibility and allows her to graduate in four years.

“I actually considered advertising as a major,” Rose said. “But I knew with SMU, the advertising course is very particular, and I didn’t want to be held back because some plan didn’t work out.”

Zhang wants to pursue a variety of options when she graduates. She is considering a graduate arts program in Europe or pursuing economics in the United States. No matter what she decides, Zhang is determined to remain involved in both the arts and economics and feels like the two could merge well in a potential career.

“People usually think of economics and art as two unrelated things, and they think I could only be an art curator, but there is actually a lot of theory in economics, and I think there’s a lot of possibility for economic research in art,” Zhang said.