Meadows ties the knot with the Prado

The Meadows Museum brings Spanish art even closer to Dallas with their announcement today that they are launching a three-year partnership with the Prado Museum in Madrid.

This collaboration has many benefits for the SMU museum, such as the loans of major paintings from the Prado, an internship exchange agreement between both museums, interdisciplinary research and many other community programs.

“After frequent visits to Madrid in the 1950s, museum founder Algur H. Meadows had a vision to establish a ‘Prado on the Prairie’, and built an incredible collection of Spanish art that forms the foundation of the museum today,” said Meadows Museum Director Mark Roglán in a press release. “This new partnership is another step in realizing his aspiration.”

The first manifestation of this partnership will be in the form of two exhibits, “Spanish Muse: A Contemporary Response” and “Sultans and Saints: Spain’s Confluence of Cultures.” Works in the collections will range from El Greco to more contemporary Spanish artists such as Eve Sussman and Claudio Bravo. “Pentecost” by El Greco will be the first loan presented to Meadows beginning Sept. 12.

For years the Meadows Museum has been the top art institution in the U.S. for Spanish art, so for students of Spanish culture this partnership with Spain’s premier art museum is exciting. Eric Park and Drew Konow both participated in the SMU-in-Madrid program last fall.

“The best part of my study abroad experience was the opportunity to visit the Museo del Prado weekly as part of an art history class,” Park, senior accounting and Spanish double major, said.

Konow, senior religious studies and foreign languages and literature double major, echoed Park’s excitement, “What is so great about the Spanish artwork showcased at the Prado is how each piece is dripping with influence from Spanish history and intellectual movements. I think it would be a once in a lifetime opportunity for students of art history to intern at both Meadow and the Prado.”

In the past, Meadows has lent several of its works to exhibits at the Prado, so it seems almost natural that the Prado is now returning the favor. Many of the works that Meadows will be showcasing in the next three years will be traveling to America for the first time.

“The fact that SMU is being shown this amount of respect from a museum filled with the greatest artists and pieces in history truly legitimizes the mission of the Meadows Museum,” Park said, “It will give our school a worldwide footprint of which I can be very proud.”

Posted on June 11th, 2010 by By Lauren Smart, Arts & Entertainment Editor
ShareTweetShare on Google+Pin on PinterestSend with WhatsApp 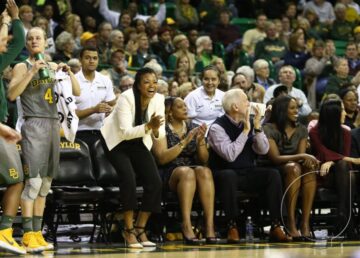 In case you missed one of Hollywood’s most notorious nights, here’s a look back at what you missed at the 90th Oscars Sunday. END_OF_DOCUMENT_TOKEN_TO_BE_REPLACED