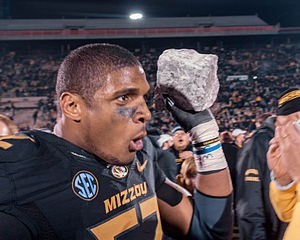 The SMU community was fortunate enough to hear a lecture by Sam this past week. Put on by the Women’s and LGBT center, Sam spoke in the Hughes Trigg ballroom to a group of enthusiastic men and women, ready to hear about his life’s trials and triumphs.

Beginning with his childhood, Sam noted that his parents split at an early age. A member of a large family, he put up with abuse from his brothers for years, leaving him no choice to be out of the house as much as possible, often even staying at a friend’s house, where he claimed his own bedroom and took shares of the family chores. Sam’s reluctant mother eventually agreed to let him play football in seventh grade, and from then on, he was hooked.

Throughout this time, he knew that he felt attraction towards boys. After some experimentation, he confirmed his sexuality in high school, but didn’t feel ready to come out, due to a religious family and social norms. Eventually breaking up with his boyfriend after rumours surfaced over his sexuality, Sam said that he began to question the life that he was living, and whether he was being true to himself.

He resolved to allow himself to try to be more open in college. On the Mizzou football team, he became more and more comfortable, eventually coming out to his teammates, and at the same time shining in his sport. As many clearly remember from 2014, however, Sam’s fairytale came to a screeching halt after the draft, where he was claimed in the seventh round, and later cut from both the Rams and the Cowboys.

Sam matter-of-factly said that he would currently be playing in the NFL if he had not come out when he did. Discrimination, as those who are members of the LGBTQ+ community know, runs rampant every day. However, he also said that he would have his life no other way. Through his coming out, Sam became an icon—a ray of hope for people in the closet, wanting to finally live as themselves in the open. The audience released a collective gasp as Sam told the story of a friend’s sister, who decided not to commit suicide after watching him come out to the public.

Sam’s talk certainly resonated with many. SMU freshman Keara Tuttle said, “His talk was so inspiring because he was able to relate his most personal struggles to us and talk about how he overcame them, and why they are no longer struggles today.” Avery Wacker, another freshman at SMU, conveyed a similar sentiment, saying “I thought he was a really inspiring speaker. I liked how he expressed that discovering his sexuality was a stage in his life that he went through, allowing him to be true to himself.”

Michael Sam is now retired from the NFL, and is traveling to speak to groups all over the country. He stressed that he wants his story to continue to give people hope. Judging from the standing ovation he received on Wednesday, it is safe to say that here at SMU, he did just that.