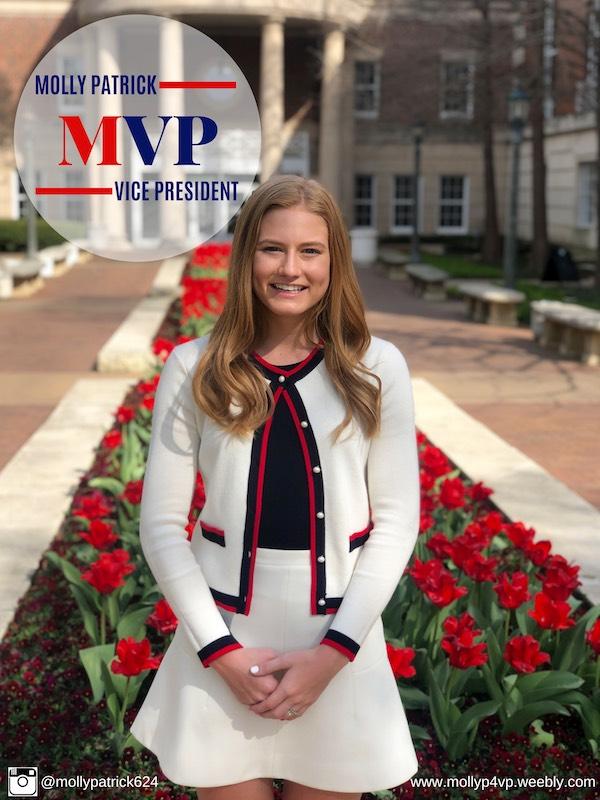 Molly Patrick first joined senate during her freshman year as freshman senator. This year, she continues her involvement as student concerns committee chair. Now, Patrick is hoping to get your vote for Vice President.

Patrick’s main campaign last year was one against sexual assault, where she made two specific recommendations that are currently supported by administration. The first makes it possible to view the history of a violator if they have a record of similar behavior, something that was not previously possible. She also led an initiative to have SMU PD teach free self-defense classes in Dedman Rec for “students to feel more comfortable with SMU PD if they need them for an emergency.”

Patrick also led a campaign for “positive body image” where she brought in a speaker who had personally overcome an eating disorder she struggled with for 15 years. Patrick put on an event where this speaker, along with three other students, could talk about their personal experiences to help other members of the SMU community who may benefit from hearing their stories.

Mental Health was also a part of her campaign. When looking through the Taos legislation, she found a counselor was not required to be present on Taos campus. She is currently writing legislation that would require such a figure to be available for students who may need those services.

But what’s Molly Patrick running for VP on?

When it comes to safety, Patrick hopes to increase the number of blue lights next to dorms. She references an incident where an SMU student outside of Loyd. She also hopes to increase the time frame that security footage is accessible from 30 days to 90. In the hopes of continuing her initiative to build a “friendly relationship” with SMU PD, she plans to have officers eat at the dining hall with students once a week.

When it comes to football, Patrick hopes to incentivize students into attending games. She wants to make it possible for students to use their Flex to buy snacks and beverages inside. As for the boulevard, she stands for what she believes is the more inclusive option, which means moving it.

Parking is another student concern, and Molly Patrick is proposing we bring new parking technology to SMU that allows drivers to see how many spots are available without having to circle around the lot. SMU Daily Campus has previously spoken to Mark Rhodes about this option, and Rhodes believes this technology is not feasible due to cost.