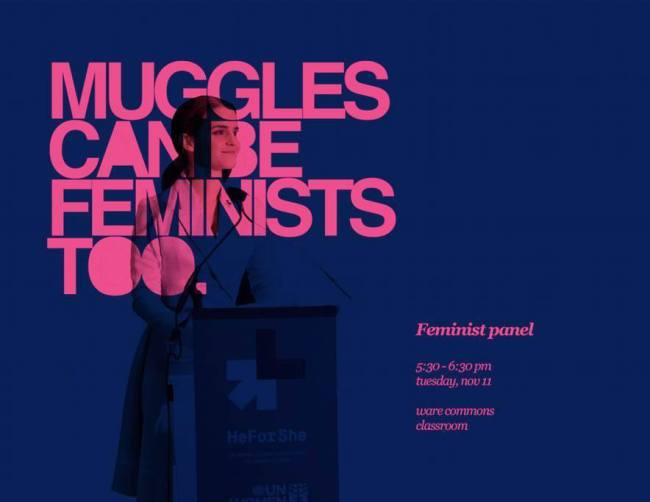 On one of the first truly cold days of the year 30 SMU students from all years huddled in the classroom of the Ware Residential Commons. The room was cozy as students sat on the floor lining the walls. The energy in the room was lively as the discussion carried on.

In the center of the room long tables are set up in a rectangle formation, with an open space in the middle. Every seat at the table was occupied, with more than one seat being shared by two friends. At one end of the table sit six students, including one male student, who served as the panel for the next hour and a half of discussion.

“There isn’t just one feminism,” said undecided first year Megan Warner, “for me it was an idea that became something to strive for.”

The gathering was a forum where students could ask questions to the self-proclaimed feminist peers. The questions ranged from rape-culture on college campuses to who were the panelists favorite feminists. Beyonce and Emma Watson each received a few votes, while others gave answers more personal to them, like a former English professor and parents.

“I admire Beyonce because she, like Emma Watson, is using her power and celebrity to bring focus to these issues,” said junior Psych Major Adé Guobadia.

One of the most important messages of the evening was that feminism is different for everyone and that no one woman or feminist “icon” can be perfect all the time. The message is equality for everyone and it’s about adapting to the time and the situation and to what you think makes a feminist.

The evening was successful with a large turn out, including an almost even split between the genders, and a very productive discourse on what it means to be a modern feminist.