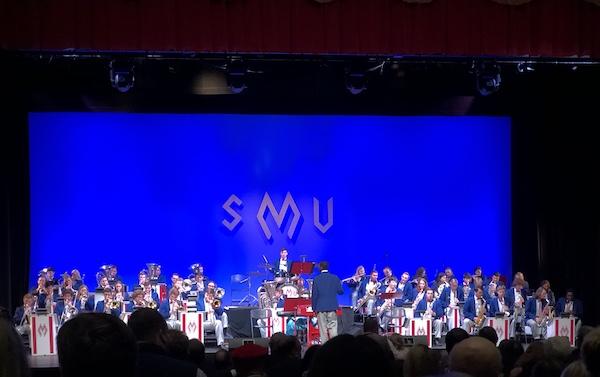 The Dallas and SMU communities cheered on students and the Mustang Band as they performed at the 87th annual Pigskin Revue in McFarlin Auditorium on Nov. 8.

“Pigskin is so special because there is no other event on campus like it,” said Amy Tippin, Pigskin performer and SMU band member. “I’ve never seen an event where there is a live band backing up a live singer or playing songs that the audience knows just for fun.”

This year, the show’s theme was SMUSO Mission: Normandy. It was a call to the World War II era, as well as a nod to the Mustang Band’s recent invitation to represent SMU in Normandy, France in 2021.

“This year is super special because this is the best the band has ever sounded and we have some really top-notch acts,” Tippin said.

The variety of performances kept the audience engaged as the music, singing, and dancing all revolved around songs from the time period or ones that fit the mid-1940s theme.

Some of the most memorable performances were the Mustang Band’s musical mashup of “The Stars and Stripes Forever,” where the audience clapped along and the band’s feature twirler made an appearance, as well as the Meadows Percussion Ensemble’s original piece “Dill Pickles.”

But the Mustang Band did not stop there.

At the end of the show, the band played one final time as a mini pep rally for all audience members, capping everything off with a singing of the “Varsity.” The audience gave a standing ovation and cheered as the band played their final set.

The program also featured Mustang Band’s parody video of East Carolina University as a way to get into the competition spirit before the Homecoming football game. The video was met with an uproar of laughter from the entire audience.

Other performances included a tap-dancing routine by Vivian Glick to the song “Cute,” Elizabeth Carr-Jones and Corbin Healy’s rendition of “Keep on the Sunny Side,” Nicole Daniels singing “My Man,” and the Belle Tones arrangement of “Boogie Woogie Bugle Boy.” Additionally, the Mustang Mavericks and SMU Pom Squad performed routines as well.

Kelley says that even though Pigskin Revue may seem like a huge process to prepare for, the band is well-equipped, mostly because it is playing right into its style of classic swing and jazz music. Ultimately, their goal is to put on a great show.

“We want them to feel like, ‘This is something I am going to come back to forever because it makes me feel like it’s a great part of being a Mustang’,” Kelley said.