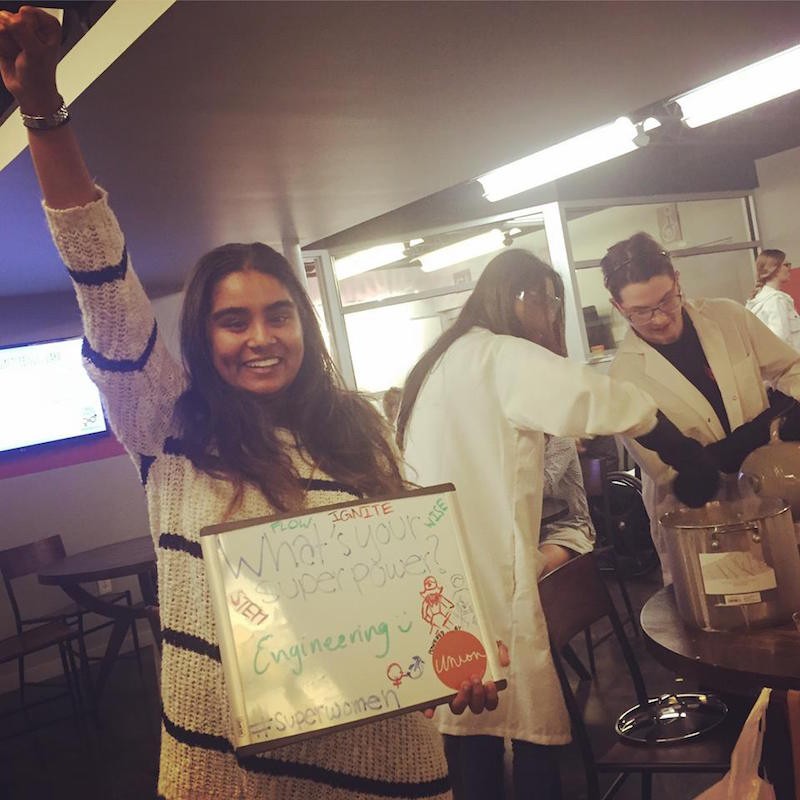 By Christiane Klinker and Jacob Prothro

Mustang Heroes sparked conversation about women in power at Union Coffee on Dyer Street in Dallas on Thursday night.

The seminar, named “Work in Progress: Women in Power” was put on by Mustang Heroes in coordination with several other organizations served to teach women how to tackle stereotypes and discrimination in the workplace. It was the fourth event of Heroes Week, an annual, week-long event that aims to raise awareness of the issues facing the Dallas area.

“Our biggest focus is connecting SMU students to Dallas as a whole,” Mustang Heroes President Victoria Huber said. “How to not only be aware of the issues, but how to take charge of those issues as well.”

Gender equality in the workforce was the focus for the discussion. Sami Williams and Angela Uno told stories about some of their experiences while working in fields dominated by men. FLOW, a lecture series at Union that focuses on gender equity, and WISE women in science and engineering, both provided statistics and information on what they’re doing to close the inequity gap for women in those fields.

Shreya Patel, a member of WISE, informed people the inequity of pay for women in chemistry.

“STEM is a field that is notorious for being male dominated,” Patel said. “The average woman in chemistry makes $85,000 a year whereas the average man makes $105,000. That’s a difference of almost 30 percent.”

WISE’s goal is to inspire the next generation of women to work in STEM fields.

During the event, Patel and her fellow WISE member also made nitrogen ice cream to give attendees. The treat used cream and then liquid nitrogen was added to freeze the cream while the members stirred.

Another group in attendance, Ignite, has a similar goal but for women in politics. Mustang Heroes decided to pick gender equality because they hoped to bring awareness to the issue through discussion.

Sami Williams, an SMU alumni talked about her experience working as an engineer. Engineering is a field that is dominated by men and Williams expressed that she sometimes feels uncomfortable and unqualified at times.

“I was definitely a very outgoing confident person while at SMU,” Williams said. “I definitely spoke my mind and was comfortable with myself.”

Williams said that everything changed when she started her job at Texas Instruments.

“I think I was kind of quieting myself and not being loud and speaking my mind because I wasn’t comfortable because of what people thought of me,” Williams said.

Typically, women make up only about 25 percent of people employed in STEM jobs. Williams said that because of this she found herself falling into the stereotype that girls shouldn’t be in engineering.

Angela Uno, a teacher and water polo referee also has experience in an industry where women are not wanted or needed. Uno said throughout her eight years of refereeing she has experienced how tough it is to be a woman in a male dominated field.

This past summer Uno was asked to ref at the Junior Olympics. When she got off the plane and met up with the other referees, she was met with a question by a male ref. He asked, “Are you excited to be refereeing in your first year?”

Even though she has been doing this job for eight years he assumed, based on her appearance, she was new.

She was watching a 16 and under girl’s water polo game on her break. Uno commented to her partner that the game was getting a little rough to which he responded, “Oh, I bet you like it rough.”

Uno called her leaders to tell them about the sexual harassment incident and was met with an unsupportive response.

“They gave me the advice to dress differently when I go out on deck,” Uno said. “Don’t go out for drinks with your partners and worry about how you word your questions or talk to your partners.”

Micha Johnson, an advisor for Mustang Heroes, said his biggest takeaway was understanding as a man where his privilege is and how he can be a resource for women.

“You have to realize that you can do something and where that starts is the conversations you have to have,” Johnson said.

*Disclaimer: Christiane Klinker is a contributor for The Daily Campus*