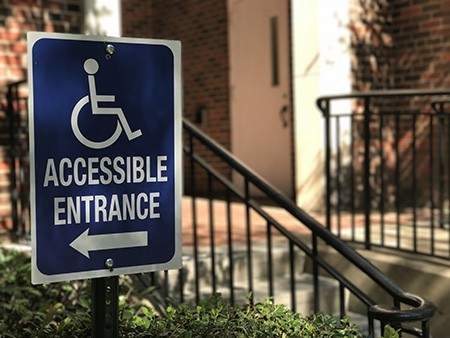 SMU Perkins School of Theology graduate student Phil Carlson says he was awakened to life at SMU with a disability after seeing his wife’s experiences on campus as an undergraduate.

For a semester, Carlson’s wife Christy used a wheelchair and crutches after a series of knee surgeries.

“At one point, because an elevator was broken in the Fondren Science building, my wife had to drag herself up and down stair steps in order to get to and from a class,” Carlson said in an email.

When the couple complained to the Disability Accommodations and Success Strategies (DASS) office, Carlson says he was told that his wife should have reported her disability well before the semester began so that her classroom could be moved to the first floor.

“Yet for those who have medical challenges, they cannot always know what things will look like for them physically months into the future,” Carlson said.

SMU English professor Martha Satz says the elevator in Dallas Hall was frequently out of order. Satz uses a walker, and her office is on the second floor of the building.

“I can, in a pinch, go up and down stairs,” Satz said. “But the elevator fails less often than it used to.”

These stories are not uncommon. At SMU, some buildings remain inaccessible to people with physical disabilities, according to DASS.

Multiple school officials would not answer how many or which of those buildings were inaccessible.

“I can’t tell you how many are completely accessible,” said Philip Jabour, associate vice president and university architect for facilities planning and management.

Denton Bricker, head of the President’s Commission on the Needs of Persons with Disabilities, said in an email that the website’s usage of the word “inaccessible” was used “broadly,” and then directed back to facilities.

None of the officials clarified what “inaccessible” meant.

The site adds that DASS can relocate classes from inaccessible classrooms to accessible ones, or add or remove tables, chairs or desks as needed.

When the Americans with Disabilities Act (ADA) was signed into law in 1990, it required employers to provide reasonable accommodations to employees with disabilities as well as requirements on public accommodations.

SMU falls under these “public accommodations” of the ADA.

When a specialist visits the location, he or she makes sure the construction is compliant and provides recommendations and needed changes, Jabour said.

While all new construction must be compliant with these standards, even buildings constructed prior to the ADA’s passage, like many on SMU’s campus, have obligations to comply with.

Under the act, “failure to remove” architectural barriers can be deemed a form of discrimination. However, the removal of these barriers must be found to be “readily achievable,” meaning that they should be “easily accomplished without much difficulty.”

For SMU, removing some of these barriers has not been “readily achievable.”

Jabour said this “readily achievable” test can vary on a case-by-case basis. In some instances, the removal of barriers can be too costly, or can conflict with other statutes. He provided an example, saying that in one renovation, compliance with ADA would have required the construction team to break plumbing code in a bathroom in Expressway Tower. In this case, the school was able to appeal and prioritize plumbing code over disabilities code.

The school’s policy under the Office of Institutional Access and Equity echoes the ADA’s “readily achievable” sentiment.

The policy states the university will provide “reasonable accommodations” to people with disabilities unless the accommodation would require significant cost or change to a program.

These accommodations apply not only to students and faculty, but also to visitors.

James Neathery was recently invited to a lecture at SMU’s law school in Storey Hall. Neathery, a member of the Dallas Council on Foreign Relations and an adviser to the Institute for Public Policy and Good Governance, has a progressive neurological disease that requires him to use a walker. His experience at SMU left him so frustrated, however, that he wrote a letter to the editor of The Dallas Morning News.

Neathery detailed his multiple attempts to access Karcher Auditorium once he got inside the 66-year-old building.

“I was told that I could get close, but I’d have to walk up steps. A staff member showed me a vintage elevator,” Neathery wrote.

“On first try, I landed on a floor that required keys to enter the main hallway. Then, someone suggested going to a neighboring building to cut across, but that still required taking stairs,” he said. “The third attempt required keys to unlock an office to exit the elevator. The door was quickly locked again, which would make a quick exit in case of fire impossible.”

Neathery goes on. “I looked for a restroom near the venue,” he wrote. “No restroom on that floor. My patience was spent and I asked to be let out of the building.”

While Neathery argued that SMU must do better, many people on campus said SMU does what it can.

One way the school seeks to address the unique issues people with disabilities face is through the PCNPD.

On the PCNPD’s website, its mission statement says the commission was created to study the unique needs of the disabled, how to make the campus more aware of these needs and how to make facilities more accessible. Each year, it compiles a report of recommendations to President R. Gerald Turner.

Bricker would not share a report but said recent solutions that were identified in reports included renovations to walkways around Dallas Hall and the main quad.

Perkins School of Theology student Matt Burroughs is one student who has worked closely with the school in making campus more accessible. Burroughs has spina bifida and uses a wheelchair.

He is also the president of Perkins Student Association and has teamed up with the disabilities office and facilities to address accessibility issues.

Of the three universities that Burroughs has attended over the course of his academic career, he said SMU is the most accessible.

“They’ve done pretty well,” Burroughs said. “The DASS office tries to provide accommodations. But SMU’s an older campus. A lot of those infrastructure decisions were made prior to anyone even thinking about people with disabilities or people with mobility needs even being on campus.”

Just like any historic university, “things wear out over time,” Burroughs said.

Burroughs pointed to specifics, one of them being bricks. “Unfortunately, bricks are beautiful, but over time they wear out,” he said, “and that makes mobility extremely hard.”

After bricks wear out, Burroughs said, they become costly to replace.

Another issue for Burroughs: the wheelchair ramps. “Some of the ramps are probably not under the best code, especially when you’re crossing the Boulevard,” Burroughs said. “In the middle area, some of those ramps are very, very steep, so you have to decide whether you’re going around the Boulevard or some other way instead of cutting across just because the steepness.”

Overall, SMU’s not doing “too bad,” he said. Burroughs understands accessibility projects can be costly, but wants to “keep the ball rolling.”

“There constantly needs to be a voice that says, ‘Let’s see what we can do to make an improvement,’” Burroughs said. “There’s always places to improve. If we stop talking about it, it stops becoming a priority.”