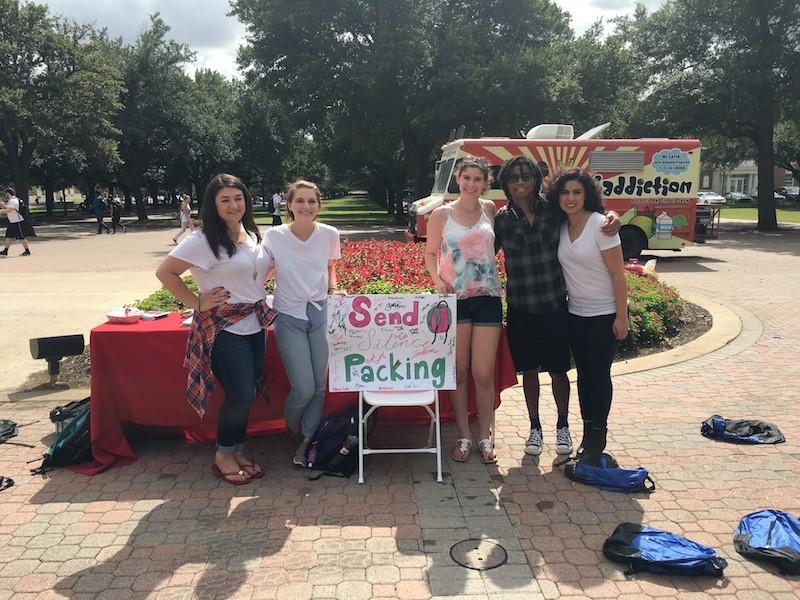 Active Minds, a new on-campus organization hosted ‘Send Silence Packing’ on Oct. 6 from 9 a.m.- 4 p.m. at the main quad. This event aimed to raise awareness on suicide prevention and how common it is, according to the club president Jianna Rizzo.

“There are 90 backpacks out here to represent how many people commit suicide in the United States each day,” Rizzo said. “That is roughly one every 16 minutes.”

Active Minds is a national organization that aims to raise awareness on mental health. There are chapters at several universities around the country, and Rizzo saw a need to start a chapter to SMU.

Rizzo is one of several peer educators on campus who plans events to raise awareness on all areas of health. Rizzo and fellow peer educators began the discussion of bringing Active Minds to SMU this past spring.

“We don’t have an organization on campus that talks about mental health, so we said, ‘all right we don’t have one here, let’s start one,’” Rizzo said.

‘Send Silence Packing’ is Active Mind’s first event. Rizzo is passionate about the importance of encouraging a conversation about mental health on campus.

“This club is going to raise mental health awareness on campus and help normalize the conversation surrounding mental illnesses and health,” Rizzo said.

Mental health is not a topic that is brought up in many conversations, according to Rizzo.

“People that struggle with [mental illnesses] aren’t alone but they’re afraid to talk about it because it’s not something that we think is ok to talk about,” Rizzo said. “That needs to change.”

Mental illness is a topic that’s completely relevant to SMU, according to Rizzo.

“It’s something a lot of people struggle with,” Rizzo said. “About 25 percent of college students are affected by it and 1 in 4 adults will have some kind of mental illness in their life.”

Sophomore and membership chair Melissa Kraft also believes mental illness is an issues that is closely affiliated with college students.

“College students are at a high risk of suicide and many times people who are struggling feel like they are going through this alone,” Kraft said. “We are here to remind students that it’s ok not to be ok and that help is available.”

‘Send Silence Packing’ was initially supposed to take place later this month. However, in light of former SMU student Jaime Shim’s passing, Rizzo and club members decided to host the event earlier. The cause of Shim’s death has not been officially released.

“In light of what happened, we decided to do it sooner because it’s something that’s on everyone’s minds right now,” Rizzo said.

Kraft hopes that Active Minds’ presence at SMU will be a safe spot for student’s to go to for help.

“I hope that people know that there are resources for them and that they are not alone,” Kraft said.

Active Minds will also host a mental health panel on Nov. 9th, according to Kraft.

For more information on the Active Minds chapter at SMU and how you can get involved, visit their Facebook page or email activemindsatsmu@gmail.com