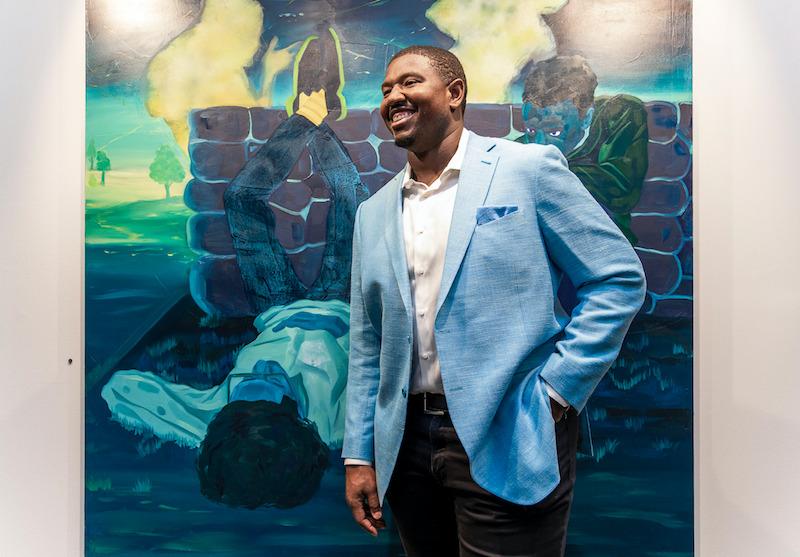 SMU hosted NFL player and former SMU athlete Kelvin Beachum as he unveiled a handful of his family’s art collection Thursday at the Jake L. and Nancy Hamon Arts Library. “Narrative as Reality: A World Reimagined ” calls attention towards identity, representation, empowerment, and the gaze.

“It’s not a white or black thing, it’s a human thing and being able to talk about art is about interpretation,” he said. “Once you interpret it, how does it make you feel? What did you pull from it?”

The reception held to recognize the art brought many people to the event including SMU president Gerald Turner. Ten of the Beachum’s personal art illustrations are set to occupy the Hamon Arts Library for a three-month period, Feb. 18 – May 22.

Beachum graduated from SMU in 2010 with a bachelor’s in economics and earned a master’s degree in liberal studies. He was a four-year-starter who continued his football passion in the NFL when he was drafted in 2010 to the Pittsburgh Steelers. Although his football career underwent changes, Beachum has stayed true to his philanthropic passions.

“You know, the thing is, I don’t think SMU has enough African-American art on campus,” he said. “There is a great population of diverse people that are on this campus and I think to be able to bring diversity to campus in a very organic way and a very subtle way I think is something that needed to happen.”

“It’s been on my heart as we have been collecting work over the years and we want it to also be a great steward of the work,” Beachum said. “ I think it’s great to talk about what we’ve done, but I think the most important part is about these artists. These are amazing artists from around the world that are doing amazing work and producing phenomenal art that needs to be put on display for the world to see.”

Bringing more distinctive art to the Dallas area was something Beachum fancied implementing, however he also is proud to bring art back to his alma mater. Others attending were also delighted with the art being on display at SMU including Brynn Price, an English major at SMU.

“I really like how he combined what he’s passionate about with social justice as well as art,” Price said. “I think it’s a really powerful combination so I’m looking forward to seeing more of it.”

“The works in Narrative as Reality: A World Reimagined bring the unique opportunity of a call to action in it’s awareness to a broader audience,” she said. “Each artist communicates a contemporary relevance to a past, present or future time that generates conversations of an enduring narrative.”

The storytelling art and its artist are put at the forefront with an emphasis placed on dialogue.