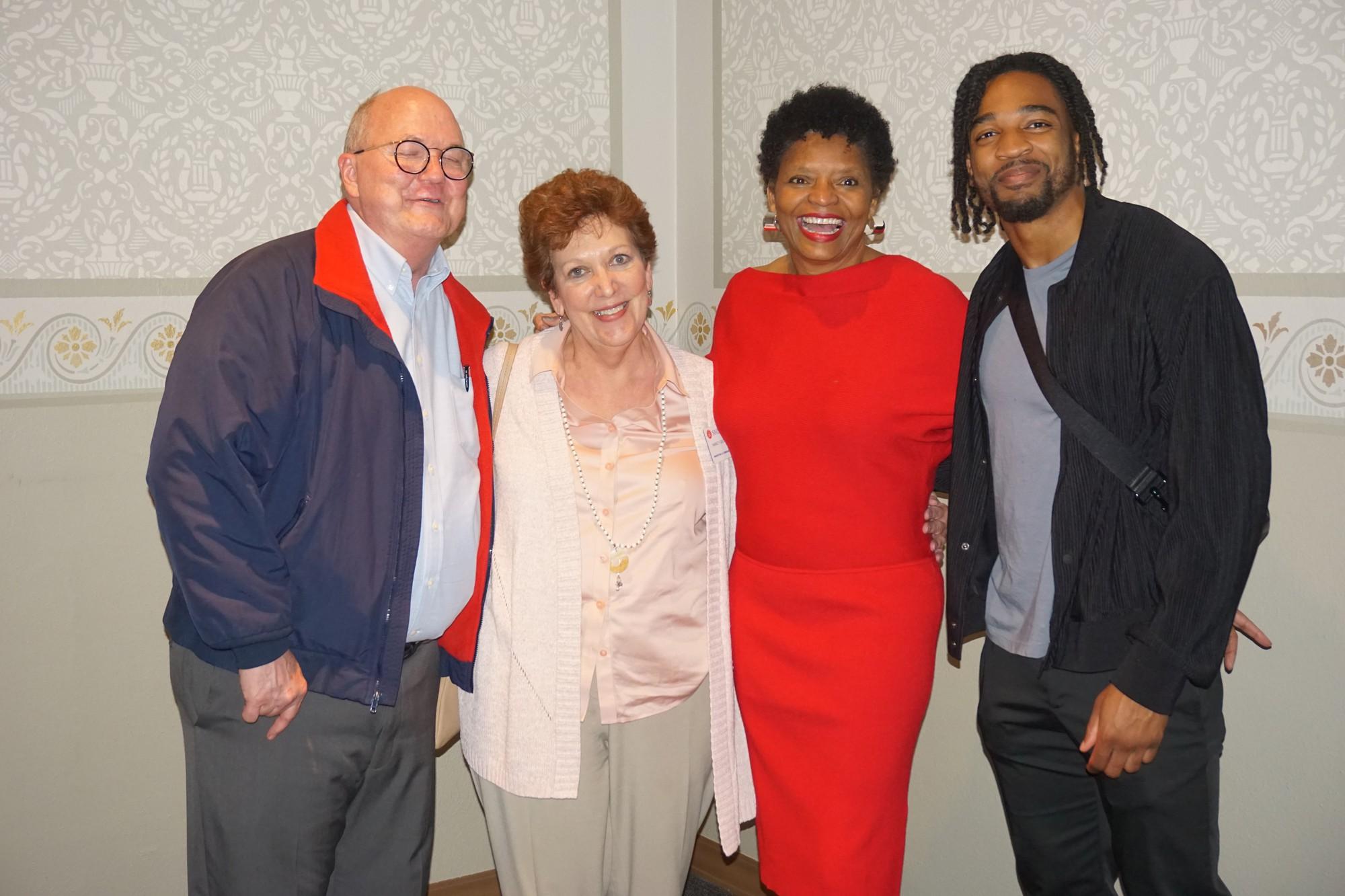 McFarlin Auditorium quickly fills up as attendees rush to the first-come-first-serve seats at the final event of the 2022 Dallas Literary Festival, “A Profoundly Revealing Vision of the American Past and Present with Nikole Hannah-Jones.”

Nikole Hannah-Jones is a Pulitzer Prize winning creator of the 1619 Project and a staff writer at The New York Times magazine. Jones spends her time investigating racial inequality and injustice in which the reporter has earned the MacArthur Fellowship Genius Grant, and Peabody Award in the National Magazine award three times. Furthermore Jones serves as the Knight Chair of Race and Investigative Journalism at Howard University where she is founding the center of journalism and democracy.

RaSun Kazadi, SMU Student Athlete and Artist, introduces a painting of his younger sister reading advocates for the literacy of black women in literacy. Behind Kazadi’s story, the artist says that what really inspired him was “breaking a different viewpoint and different version of inclusion to SMU.” Kazadi compares himself as a student athlete to the community SMU delivered for progressing in diversity and bringing knowledge to a small community over inclusion.

“As a football player and student athlete I think it’s completely awesome when the community comes out to support an event, especially a cultural event…It’s not just about diversity or race it’s about diversity of geographical location and thoughts.”

Sanderia Faye Smith, Assistant Professor of Practice at the English Department, Creative Writing, and Executive Director for the Dallas Literacy Festival with an award-winning prize for her book Mourner’s Beach, says that “I can tell you when the student senate selected her out of several authors from a list, and they selected Nikole, it gave me chills, and I was surprised cause this is SMU and it is PWI.”

The journey of getting Nikole to the Dallas Literacy Festival underwent a unanimous vote in SMU Student Senate. Sandria Faye Smith, Katherine Delaney, SMU Student, and SMU worked together to put the seminar together.

“Last week we had 400 people, and I found the connection between Nikole and Martin Luther King. I’m not a person that breaks easily, but I did. All North Texas came together and everybody brought their A game” said Smith.

Nikole Hannah-Jones co-founded the Ida B. Well society for investigative reporting, seeking to increase the number of reporters and editors of color. Jones extends her love for Ida B. Wells by honoring Wells in Jones’ Twitter handle under the name “Ida Bae Wells.”

In a private interview with the Daily Campus, Nikole Hannah-Jones says that “My twitter handle pays homage to Ida B. Wells who was a black investigative reporter, civil rights activist and suffragist. She was the first example I saw of the first black woman I saw that I wanted to do in my career. She was absolutely fearless and courageous, and I see her as a model, as the type of woman and journalist I wanted to be.”

Coming to SMU for the Dallas Literacy Festival meant a lot to many. As those of all ages, genders and races came together in one room, Nikole points out that our “Communities are fighting back…We have a choice about what country we’re going to have going forward. Believe me, if we don’t protect our most marginalized, they’re coming for you next. There’s no safe space…You guys (Texas) are the templates”

One of Nikole Hannah-Jones’ most significant works is The 1619 Project.

The 1619 Project is a work of journalism published in August 2019 in The New York Times that made the argument about how the people of our country can better understand where we live if we think about its origin and how we better understand the United States if we marked our founding and origin in 1619.

Jones brings up cases like the Black Lives Matter Movement showing that 1 out of 10 people in the United States participated in the BLM protest.

“It’s not just an argument about policing anymore. It’s an argument about the larger society in a society that allows a white officer to kneel on a black man until he leeches the life out of him knowing you think recorded and leave, he will bear no consequence for that. What kind of society creates that and people are starting to question that.”

Concurrently, she states that “narrative drives policy.” The Critical Race Theory phenomenon, according to Jones, sprouts from the fundamental redistribution of resources that calls for unsettling power that was not present without a fight. “They want to tell them that your heroes aren’t your heroes. They want to say that your children are racist, and that you’re the oppressor…You have to save your country from these people who don’t believe that America is great.”

Ultimately, Jones brings up the school ban of books in Texas.

“I’ve been wanting to come and teach in Texas ever since y’all tried to ban me from the schools” says Jones. School ban of books is a sign of clarity for The 1619 Project resulting in wedging issues of the idea of dealing with racial justice around the times of the Black Lives Matters protest. “What these are promoting is a very particular idea of patriotism.”

As the audience and Jones makes a connection with each other over the image of what its like to be in a state that judges the idea of transgender or queer children, being a woman, being Black or being a person of color is a “scary place” for those in the scene. The audience takes a minute to listen to Jones and applauds her for her strong words and message. “Healthy societies don’t ban books” says Jones placing the bolded words on the projected screen behind her. “It matters because in the end these laws are not about history at all. These laws are about power, and who are used to having the power to shape the narrative of our country, how we think about our country, how we understand our country.”

Jones ends her seminar by mentioning Ted Cruz, calling him “Cancun Cruz.” She spoke about Cruz quoting Dr. Martin Luther King today, and not judging others based on the color of their skin. Rather, “We have to choose hope as an action and hope that tomorrow we’ll all refuse to send us back in the past and work collectively to work toward the country that we deserve” says Jones. Jones emphasizes the idea of hope. “It’s not enough to hope. Hope is useless if it’s only hope. Hope must be an action.”

During her seminar, Jones speaks about the controversy behind the saying “Majority Minority.” Jones says that “We should be concerned, because we are going to become a country where white people are no longer the majority. We are being ruled by our lesser, then the truth is, we will be a plurality.”

In a private interview with the DC, the DC asked Nikole Hannah-Jones to go into detail about the lack of representation for minorities in the news based off of her “Majority Minority” explaining. “We are a multiracial country, and so when newsrooms are not reflective of our country, it’s not about political correctness, or feeling good, it’s about accuracy. How can you accurately cover the country or the world that you live in if you don’t have people coming from all the different experiences… I actually think that we are the best people to tell our own stories so don’t steer away from your own.”

Jones believes that something that needs to be covered in the news more is “that political journalists are just eloquent to cover the crisis that our democracy is in…I don’t think you necessarily understand when democracy is deteriorating. This is also why diversity is important because if you have more diverse political reporters, then you have a more diverse understanding of the challenges of our country.”

During her private book signing, attendee K. Linda Victoria Glenn from the DLF repeats that “this festival has changed the lives of our community.”