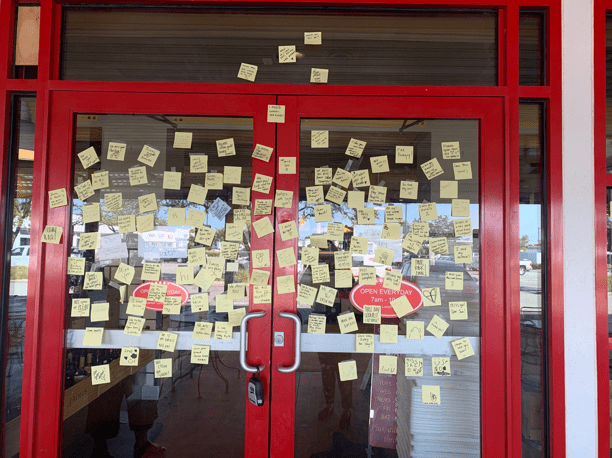 When North Dallas was hit by 10 tornadoes on Oct. 20, hundreds of businesses in the area were forced to close their doors. The stores at the intersection of Preston Road and Royal Lane sit in one of the neighborhoods worst damaged by the storms, and business owners say they are still trying to get back on their feet.

“We mainly had water damage, gas leakage, a little bit of roof damage” said Meredith Albert, an Eatzies employee. “Out of all the stores, we had the least amount of damage.”

The businesses on the south side of Royal Lane were destroyed, completely gutted by the tornadoes. On the north side, the stores, like Eatzies, were damaged, but were able to be repaired before the holidays.

The largest tornado out of the 10 was categorized as an EF-3 tornado, which had wind speeds of up to 140 miles per hour, and first touched down just north of Southern Methodist University. The tornado was on the ground for 15 miles, the Dallas Morning News reported, and left a distinct path of destruction behind it. Almost 1,000 homes were reported damaged or destroyed and more than 100,000 people were left without power.

Despite the damage, no one was killed and no life-threatening injuries were reported.

The North Dallas community could be looking at close to two years and millions of dollars to rebuild until it is fully-functioning again, said Jeff Kitner, COO of the North Dallas Chamber of Commerce.

“I don’t know how you can put an estimate on all of this,” Kitner said. “You can see all the residential and commercial damage, it’s going to take a long time and a lot of money.”

The stores could be victims of that rebuilding period. Construction on the roads has caused major traffic jams that have discouraged customers from returning to the area.

“I go to Preston Royal mainly for restaurants,” SMU senior Zoey Wittlake, a political science major, said. “My favorite Chinese place is right at that intersection. But if I am super hungry, the last thing I want to do is sit in traffic. Convenience is the most important thing for me.”

Not only were some businesses in the path of the tornadoes, but also some of their most loyal customers.

“About this time last year we had 400 orders and now we have about 200,” said Yvette Longoria, Eatzies’ general manager. Eatzies reopened on Nov. 14, about two weeks after the tornado.

“A lot of people in this area, their houses were destroyed and they’ve had to go to hotels, live with relatives, “ Longoria said.

Even though the stores were closed temporarily, the community came together to show their support for those that were damaged, Longoria said.

“One of our regulars put a sign on our door that said if you miss Eatzies, leave them a note and we had tons of people put notes on our door,” she said.

The stores on the north side of Royal Lane are now open, but those on the south side are still in ruins. Some of the businesses are closing its doors for good, KERA reported, while some have plans to rebuild or move locations. It is unclear how the city will proceed with the storefronts directly hit by tornado.

Just days after Oct. 20, the city of Dallas voted to give those affected by the storms a tax relief, by allowing a reappraisal of property taxes if a home or business was damaged.

“The City of Dallas has been very involved,” Kitner said. “The mayor was out here shortly after the storm, and we have been working very closely with the city to get all this back to normal.”