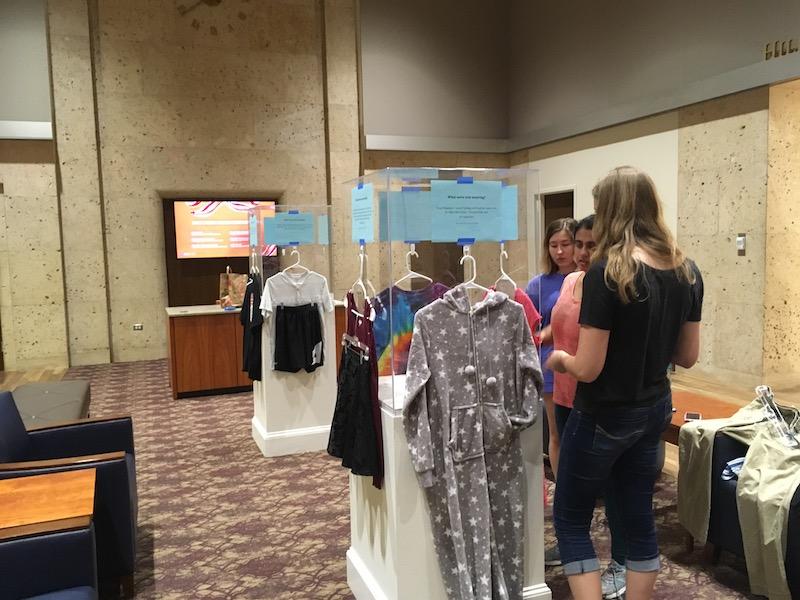 “What were you wearing?” It’s a common question that plagues the discussion around and adjudication of sexual assault cases. In honor of sexual assault awareness month, Not on My Campus (NOMC) put up a sexual assault survivor art exhibit on Monday, April 22 around this question.

“We’re setting up an exhibit to show what people were wearing when they were sexually assaulted. And a lot of these [outfits] were inspired by university students around the country, and it goes to show that what you were wearing doesn’t excuse sexual assault. It’s not an excuse for sexual assault and it shouldn’t be accepted. And it’s never the victim or survivor’s fault,” NOMC’s Sarah Subramanian said.

The Not on My Campus exhibit conveys how biased and stereotyping the question “What were you wearing?” is.

Subramanian said this month Not on My Campus has facilitated different activities to raise awareness about consent. At Relay for Life, NOMC described scenarios and asked questions regarding bystander intervention. At Peruna Palooza, NOMC members tasked SMU students to wear drunk goggles and do simple tasks, like give a high five. Subramanian said the point was “if you’re not able to do this, you’re too drunk to consent to sex.”

During the exhibit’s setup in Fondren Library, a student walked up and expressed appreciation for the exhibit. So too did former Feminist Equality Movement president, Karen Guan, last week. The exhibit was in Hughes-Trigg Student Center last week.

Tawny Alonzo, the director of Violence Prevention and Support Services, helped NOMC acquire the exhibit. Subramanian said there’s a national exhibit that has outfits and quotes from survivors about what they were wearing at the time. NOMC got their articles of clothing through donation and thrift store shopping to match the exhibit’s quotes.