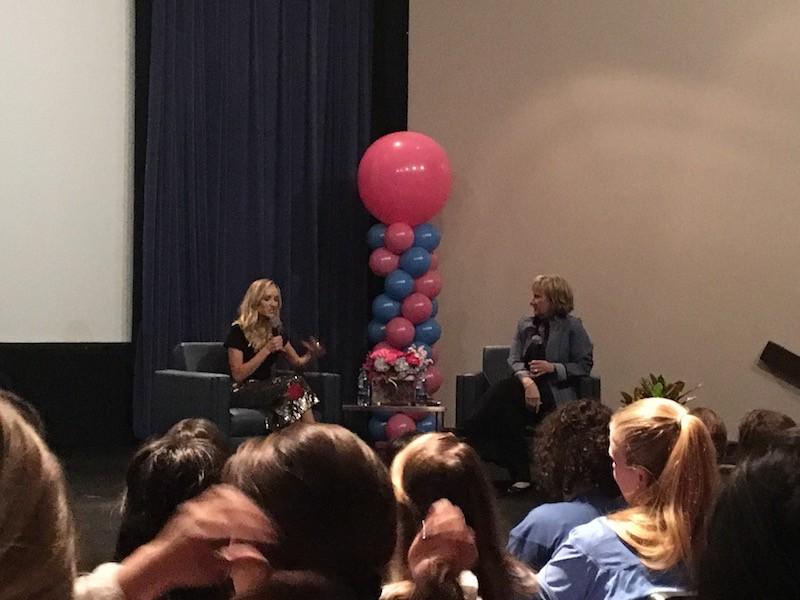 Nastia Liukin spoke to a full auditorium on Tuesday about her experience as an Olympic gymnast and how she discovered who she is outside of the gym. A crowd of roughly 150 people, college students and community members, gathered at SMU’s Hughes-Trigg Theatre to hear Liukin speak.

“Everybody’s perception is different,” Liukin said. “You can lose a gold or you can win a silver.”

The 2017 Lectureship on Values and Ethics was hosted by the Delta Gamma Fraternity in conjunction with the Cary M. Maguire Center for Ethics and Public Responsibility. The lecture series generally draws a crowd of young college women and a few local community members. Liukin’s local upbringing played a strong role in the choice for her as a speaker.

“We wanted someone people would be interested in coming to, and her SMU connection and Dallas ties were a big draw,” Katelynn Moriarty, Delta Gamma’s Director of Foundation Events, said.

Liukin attended SMU during the spring semester after her victory at the 2008 Beijing Olympics where she became a five-time Olympic medalist. She even told the crowd that she still has her SMU ID from her time on campus.

Liukin faced criticism while training for the 2012 Olympic team. She learned how to use this as a means of motivation before moving on into a career as a gymnast analyst for NBC.

“It’s really easy when people are supporting you and telling you that you’re awesome,” Liukin said. “But when everyone turns their back on you, it’s hard. I used that to motivate me, and it taught me to surround myself with the right people.”

Liukin’s experience in dealing with criticism and negativity from others had an impact on at least one of the audience members.

“Her message about not letting other people’s negativity toward you affect you was refreshing coming from her,” student Jennifer Bojues said. “In the media she is always portrayed in such a positive light and you don’t know the struggles she goes through behind closed doors.”

Liukin discussed the hard work and long hours she had to put in in order to achieve her goals. Her typical training week consisted of seven hours a day, six days a week. Liukin also put in extra work outside of her standard training.

“It was really inspiring for me and I admire the work that Nastia put into her achievements and hope to achieve that same level of satisfaction in my life,” student Brittney Effner said.

The audience included a group of younger girls who are all gymnasts in the area. They were around 10 years old, and Liukin took a moment to speak to them directly about pursuing their dreams.

“Find that passion for yourself,” she said. “Whatever it is you choose to do, do it for yourself.”