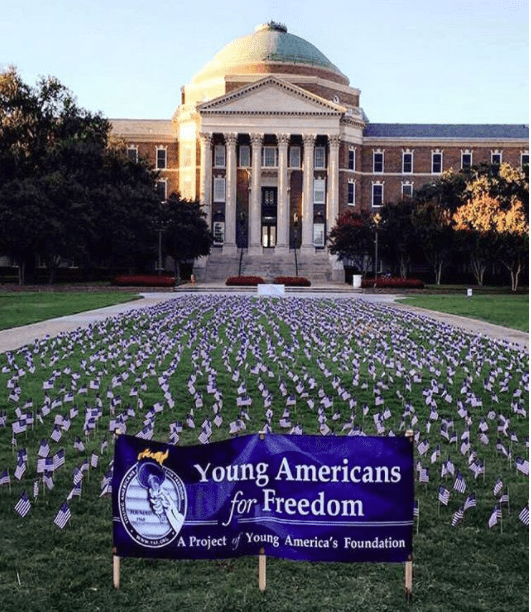 UPDATE 5:24 p.m.: Updated to include comment from the university.

An open letter to President R. Gerald Turner claims that the university denied the SMU chapter of Young Americans for Freedom’s request to host the annual 9/11 memorial on Dallas Hall lawn.

Instead, the letter claims, the group will have to host the memorial in the Morrison-McGinnis park, along with all other displays in the future, such as Mustangs for Life’s annual anti-abortion cross display.

NEVER FORGET. We placed 2,977 flags on our campus in memorial to the 2,977 American lives lost 15 years ago today. May the world, and ourselves, never forget who we are. ?? #onenationunderGod #neverforget #911

The letter, signed by groups on all sides of the ideological spectrum, also claims that the administration’s policy wants to avoid “messages that are triggering, harmful, or harassing.”

In wake of the open letter, the university has said that the “poor wording” of the new policy has been removed.

“SMU apologizes for the original inappropriate wording that was used in the new policy on campus displays,” said university spokesman Kent Best in a release. “That language – regarding messages that are triggering or harmful – was added earlier in July and had not gone through the appropriate approval process.”

A portion of the newest display policy, issued after the open letter, reads: “Because we seek truth, we encourage the expression of ideas, accept challenges to our assumptions, and treat those whom we question as colleagues sharing a common purpose.”

In the past, along with Young Americans for Freedom’s flag display, the university itself has held 9/11 ceremonies. Last year, President Turner said the flagpole (at the foot of Dallas Hall lawn) was the best place for a ceremony, because the SMU community gathered there on the fateful 2001 day.

These annual displays have been met with little resistance until several years ago, when a number of students spoke out against Mustangs for Life’s “Memorial of Innocents” cross display. Each cross, the group says, represents a life lost to abortion each day.

In 2016, a video by student Carson Wright objecting to the Mustangs for Life display garnered over 130,000 views on Facebook. This year, then-junior Claire Krizman raised over $14,000 for Planned Parenthood and caught the attention of the Dallas Morning News in the process.

Best explained that the lawn display policy was revised last month due to the “need for a different, yet still prominent, display area,” as Dallas Hall lawn could provide scheduling conflicts.

When asked if any scheduling conflicts had occurred in the past, Best said he couldn’t provide an example. He did say that this fall, conflict would have occurred from the 9/11 display and setup for the Boulevard on Dallas Hall lawn.

He has not yet clarified if a conflict will also occur between setup for the Boulevard and the 9/11 display in Morrison-McGinnis park, which has also been used as a Boulevard space in recent years.

Read the open letter in full:

Last week, Young Americans for Freedom submitted a use of grounds request for its annual 9/11 Memorial
display, which consists of 2,977 American flags that honor the lives lost that terrible day. The response they received is the reason for this letter.

The response stated that our University has changed its policy on Dallas Hall Lawn displays, which are
no longer permitted and are to be conducted in MoMac Park from now on. While we understand that displays are still permitted, this new location is far less prominent than the iconic Dallas Hall Lawn, which thousands of students, faculty and local residents
pass by every day and serves as the heart of our campus. This is disappointing considering that the purpose of the many displays that our organizations construct is to generate respectful, diverse dialogue so that our campus will be a center for thoughtful
and engaging discussion that inspires and informs the ‘World Changers’ we are all striving to become.

What is even more concerning is the language that was used in the new policy. It read: “The University
also respects the right of all members of the community to avoid messages that are triggering, harmful, or harassing.” This statement has implications that are very dangerous to our university’s academic environment and echoes similar statements made by universities
across the nation. Places like UC Berkeley, Middlebury and Evergreen College have effectively shut down free speech on their campuses. Freedom of speech is one of the most important of the inalienable rights of our nation. It has proven to be a fundamental
prerequisite to democracy and freedom throughout history. People absolutely have to have a right to their own opinions, but this does not come with a right to be shielded from opposing ideas, especially in an environment dedicated to the learning, sharing
and developing of new ideas.

A flag memorial to honor those who lost their lives in the events of 9/11, or displays promoting the education
and discussion of the pro-life, pro-choice movements among SMU students must not be viewed as attacks on others. In choosing to view these displays as such, SMU is deviating from its call as a center of higher learning. Its’ mission is to be a place where
ideas are challenged and intellect thrives, not a place to hide or silence alternative points of view. If SMU chooses to limit students’ rights to challenge and discuss the ideas and values that are fueling the creation of World Changers, it is indoctrination,
not education, that will be taking place on our campus. We are witnessing the degradation of the mission of higher learning at universities across the country because of policies like this.The question we ask is this: how can students change the world if they
don’t have the opportunity to share and express their closely held values and beliefs?

We, as student leaders of this University and whose student organizations promote messages that have a
right to be seen and heard, urge you to reconsider this restrictive and destructive policy.