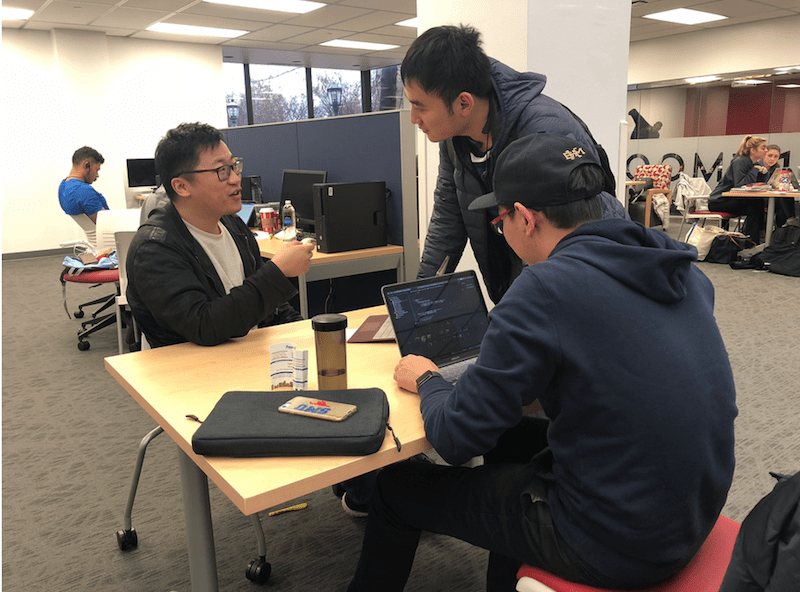 Students group together to study in the library, hunched over books and laptops. Some groups study together for the same subject, while others study together simply because they speak the same language.

With international students making up only 9 percent of the SMU student body population, they are a tight-knit group.

“Chinese students have a large group chat that engages most of the Chinese students at SMU,” Doreen Qin, senior, said. “I have known some of my friends before coming here from the chat.”

While some American students cross state lines, international students cross oceans. For Doreen, living overseas in the states had always been a dream. First coming to the U.S. in 2012, Doreen lived in Pennsylvania then Florida for high school before coming to SMU. Infatuation with American culture not only inspired her, but also her parents.

“My parents are very open-minded that they told me they would send me to study abroad when I was a child,” she said. “My mother is a big fan of American movies and she encourages me to come to the U.S.”

International students sometimes feel that coming to the U.S. is their only chance at a good education. For Lester Li, junior, continuing school back home in China would have possibly impacted his future in a dramatically different way.

Students in China take a high school exam, which determines your rank in the city and which high school you are to attend. Lester was placed in the second ranked high school in his city, Jinan, but he wasn’t considered a “good” student, simply because of the competitive nature of the system.

“I was not the one made the call,” Li said. “My father had a conversation with me about study abroad when I was preparing for the high school exam.”

Lester, while finally coming around to the idea, was initially against the idea of study abroad because he did not want to leave his group of friends back home and did not feel comfortable living on his own at such a young age.

Doreen and Lester are only two of many students who have come to study in the states from abroad. While they feel comfortable around other international students, venturing out to other social groups or events still leaves some feeling nervous.

“Honestly, I still spend more time in my comfort zone, which is composed of people mostly from China,” Jerry He, junior, said.

Some international students stick to their comfort zone, but others want to challenge themselves, socially, despite the difficulties attached.

“Most of international students are keen to get involved in campus,” He said. “But at the same time, they may feel shy so they may not be brave and confident enough to speak up for themselves in a brand new environment for them.”

“But at the same time, they may feel shy so they may not be brave and confident enough to speak up for themselves in a brand new environment for them.”

International and American students want the same thing – to make new friends in a strange place. However, something holding the two demographics apart is a big language barrier. This barrier keeps some of the international students from branching out and finding American friends, even though they want to.

“International students are willing to meet American students,” Qin said. “Sometimes they are shy, so they need someone to come to them and we are very excited to share our culture.”

On top of a language barrier, international students sometimes feel as if they can’t necessarily relate to American students, because of their different backgrounds.

“I am always the kind of person who is willing to meet people and make friends with various backgrounds, but sometimes I may get a lack of topics to talk to people,” He said.

Language barriers also play a big role in not feeling confident enough to branch out. Some international students have only lived in the states for a few years and have not perfected their English skills. While some might be proficient, they still might not feel confident about their communication skills, so they have a hard time participating in discussions, Claudia Sotomayor Hart, Director of International Student and Scholar Services, said.

Along with experiencing a difficult social life outside of their immediate friends, international students might struggle with academics because of the language barrier. Some of the students can easily fall behind by either not fully understanding professors or not feeling comfortable participating in class discussions.

“Please encourage international students to participate more in class,” He said. “Encourage them to speak up more in order to help them gain more confidence.”

Because of the high-paced nature of some of the classes at SMU, international students may struggle to keep up with curriculum.

“The hardest part of being at SMU is networking,” Qin said. “It is harder to meet people after class since many live off campus. I had a hard time managing my time at the beginning.”

Networking is an essential part of the college experience, not only to feel more comfortable on campus, but also to have a better chance of a job after college.

“Many international students told me that school do not offer enough companies that support H1B, work visa, so I hope schools can get more companies to the career fair,” Qin said. “It will be so helpful for us to apply for jobs in the country.”

An issue that American students and international students share?

Academics and social life aside, international students find a way to make themselves comfortable. Despite being thousands of miles away from their country, they always have a piece of home with them. Some find solace in the friends they make who can share similar experiences and cultures. Some, like Doreen, raise pets to comfort them when they feel home-sick. Others find comfort in things that simply remind them of home, like food.

“The variety of Chinese food definitely reminds me home,” Li said. “I like the way I get to taste different food from every part of China here. I also love how I can find restaurants that serve the food from almost every country.”

Similarly, Jerry finds that specific foods remind him of life and family back home.

“Dumplings,” He said. “They are the food that my family have for great traditional festivals in China.”

In an effort to inform American students of the diversity on campus, ISSS hosts International Education Week every November. This week is tailored to bring American and international students together with events like Around the World at SMU, which celebrates SMU’s global community and diversity with cultural performances.

“I think American students need to embrace these students, as it takes courage to leave home and your culture to study abroad,” Hart said. “If we can appreciate this about them, and make an effort to get to know them, we would be learning new cultures within our own institution.”

“I think American students need to embrace these students, as it takes courage to leave home and your culture to study abroad.”

American students are urged to step outside of their own comfort zone and mingle with the international students on campus.

“If American students get to know them, they would learn that there are more things they have in common than the differences they may have grown up with,” Hart said.