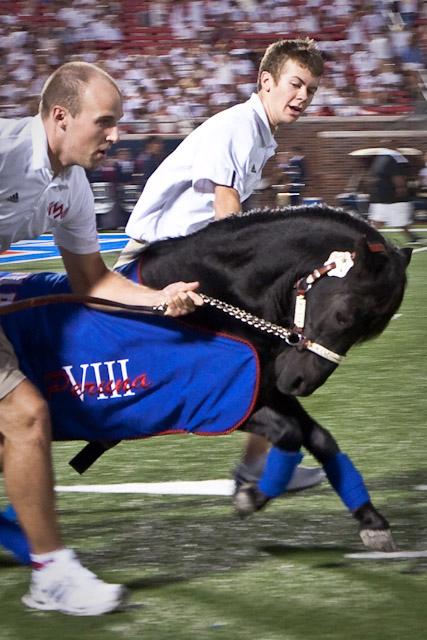 Small yet ferocious, cute but deadly, SMU’s Peruna is the mascot that all other mascots fear. But even though he was ranked as the #10 Best College Mascot by America’s Best in 2009, the story behind the mascot is one that many students do not know.

Peruna VIII, the current mascot, will be retired Saturday during halftime at the game against UCF. But there is much more to this Peruna and the mascots of the past than just running across the football field and looking good for the cameras. The mascot must embody the SMU spirit and have his Shetland pony heart be as strong as a mustang’s.

Having a Shetland pony represent SMU was decided on before an official mascot was selected. Peruna I was donated to the school by T.E. Jones, a racetrack owner, and Cy Barnes, who felt that the 150 lb. powerhouse embodied SMU. Luckily for him, “Mustangs” won the student vote over “Bisons” and “Greyhounds”, making the school’s first mascot a wild horse, with the physical embodiment of a petite pony.

Peruna’s name was not immediately chosen. In fact, it was not until a couple years after Peruna I, who was first named Parsons after the school of theology, that the student body decided the school mascot needed a more official and permanent name that would transcend the decades.

The name “Peruna” was derived from a popular tonic during the Prohibition Era that was known for its high alcohol content. During the nation’s dry spell, this little pony would give the kick that the school needed.

There have obviously been many Perunas in SMU’s 100-year history and each has a unique story to tell.

Known for his feisty nature, the pony formerly known as Parsons became SMU’s official mascot and even traveled with the football team to New York. Peruna I died on Halloween in 1934 after escaping from his on campus residence and was struck by a car on Mockingbird Lane. The school went into mourning.

Peruna II was the first Peruna to be donated by the Culwell’s, a tradition that would last the rest of SMU history, and Peruna II was also the first of two mares that would represent SMU. Peruna II died of blood poisoning after nearly a decade of service.

Peruna III was given a special red and blue trailer to be transported in. During the early days of the Mustang Band Peruna traveled with the band and was listed on the playbill as “the midget wonder horse!”

Peruna IV, the second mare, lived through two consecutive Southwest Conference Championships and when she died the Student Council was called from their Spring Break to serve as pallbearers. Peruna was buried in Westcott Field.

The longest running Peruna up until that point was known for his pomposity. Through his lively prancing and biting he definitely captured the pride of SMU students. For the SMU vs. Notre Dame game Peruna stayed at the expensive and stylish Stevens Hotel where he drank from wash bins and had elevator privileges. For the UT game, when Peruna was being hauled to Austin, news reports stated that he had been kidnapped by a group of UT students. UT was shocked to see the real Peruna at the game with both his mane and tail, unlike the horse they had just kidnapped. This was also the infamous Peruna to have killed the New York’s Fordham Ram after the ram got too close and was killed instantly after one kick from Peruna. This would give SMU’s mascot the reputation of being the most deadly.

This has been the longest running mascot in Peruna history. Peruna VI served 21 years and retired after a liver ailment. His ashes are under the statue at Peruna Plaza at Ford Stadium.

Taking after Peruna VI, Peruna VII proved to be a difficult horse to break and because of his wild nature Culwell introduced him a year later than planned.

The current Peruna made a strong impression when he tripped and dragged several of his handlers across the field. He also led the Mustang Band in President George W. Bush’s Inauguration Parade.

Peruna, the Pride of SMU

When asked what a Peruna means to them, SMU students immediately smile when they think of the lively Shetland pony.

“I think people might be a little confused at first,” said Margaret Ellen Crawford, a sophomore and former spirit leader at Mustang Corral. “Although we are called the mustangs, we have a pony, but I think they embrace it once they hear all the stories about Peruna and see him. He’s tradition, he’s feisty, and classy just like SMU students.”

Just like SMU students, Peruna has a Facebook page that lists his interests as boulevarding, taking photos with cute girls, chasing mares around the ranch, and killing other mascots.

“Peruna is a great image and tradition of the university and I’m proud to know that we have a Peruna that embodies the school’s spirit,” said senior and SMU Ambassador Derek Hubbard.

There is something quite beautiful about seeing the little horse run with all his might across the field. Maybe its because just like Peruna, SMU is a small school, yet the student body strives for greatness and does not let anything dampen their pride.