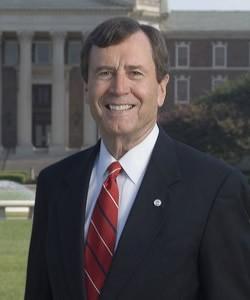 During the Board of Trustees’ quarterly meeting May 5, current SMU President R. Gerald Turner agreed to a five-year extension of his contract, meaning President Turner will continue serving until at least 2022.

The renewal of Turner’s contract signals trust in his leadership from the board, according to Chair Michael M. Boone. “The Board’s goal is to continue SMU’s momentum and its rising prominence at this historic time,” Boone said in a press release.

Turner has served as president of SMU since 1995. Under Turner’s tenure, SMU completed a $1 billion gift campaign and brought the George W. Bush Presidential Center to campus, among other achievements.

Prior to joining SMU, Turner served as chancellor of University of Mississippi from 1984 to 1995. At the time, Turner was among the youngest university presidents and made headlines for firing football coach Billy Brewer after allegations of recruiting violations.

During the meeting, the board also re-elected Boone as board chair, with current vice-chair Robert H. Dedman to take his place in June 2018.

The newest ex-officio members of the board are Paul Krueger, mechanical engineering professor and president of Faculty Senate; Alumni Board Chair Doug Smellage; and Student Trustee Andrew Udofa, a 2014 alumnus and current doctoral student.