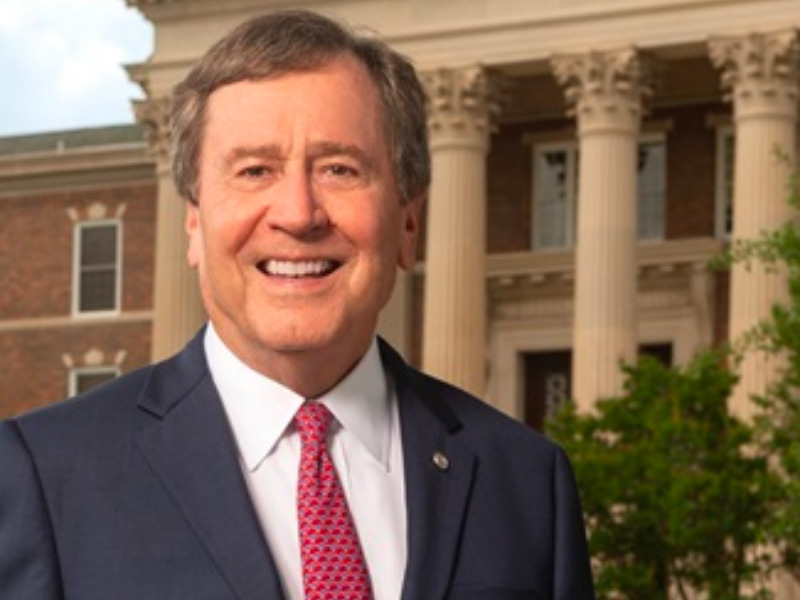 SMU President R. Gerald Turner received an award on behalf of King Felipe VI of Spain for his “extraordinary civil character and accomplishments that have benefited Spain” Friday, Feb. 18.

The decoration ceremony took place at 9:30 a.m. in the Hamon Gallery of Meadows Museum and was presented by the Spanish ambassador to the U.S. Santiago Cabanas.

“This is indeed a great honor for me and for SMU,” Turner said during the ceremony. “It is one that I accept with sincere gratitude and in deference to the countless individuals over the last half-century who have helped position SMU at the forefront of the study of Spanish art and culture in the United States.”

The award, Encomienda de la Orden de Isabel la Católica (The Order of Isabella the Catholic), is a Spanish civil order given to both Spaniards and foreigners to recognize services benefiting Spain. Turner was granted the award in recognition of his fundraising and artistic efforts throughout his 26 years as the university’s president.

Since 1998, Turner’s fundraising efforts have brought in approximately $98 million in gifts and grants from The Meadows Foundation alone. These funds have allowed for more special exhibitions, educational programs, the acquisition of more art, such as an El Greco piece, and numerous collaborative exhibitions between the museum and prestigious Spanish institutions, such as Museo del Prado and the Patrimonio Nacional.

Under his leadership, the Meadows Museum has also developed fellowships where scholars can research and visit Spanish art with partner institutions around the world.

His most recent accomplishment led to the formation of the Custard Institute for Spanish Art and Culture at the Meadows Museum in August 2021. In working with donors Linda and Bill Custard, he has already raised $6 million for an institute solely dedicated to the study of Spanish art and culture.

President Turner has also spearheaded multiple initiatives for the university’s study abroad programs in Spain. SMU-in-Madrid was the school’s first study abroad program and is the most popular program on campus. Cox students also participate in summer internships with businesses in Spanish cities such as Barcelona, Madrid, and Seville.