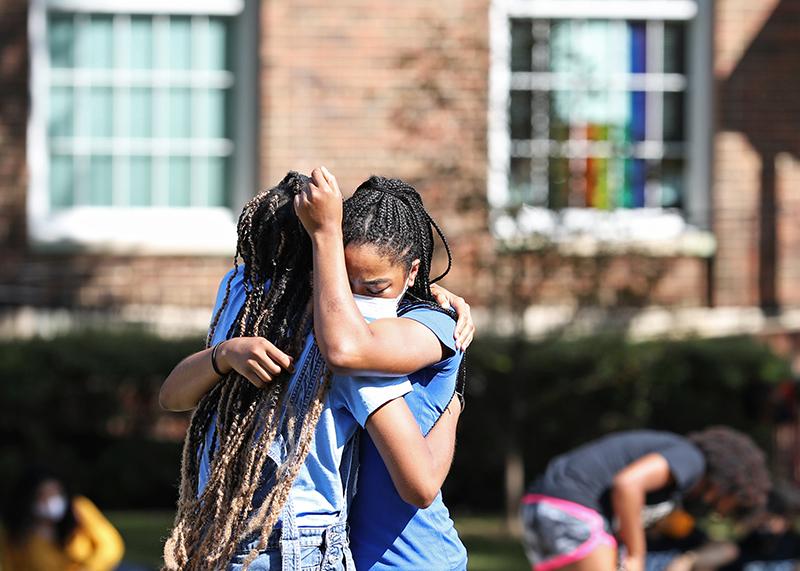 SMU Black Student-Athlete Committee (BSAC), SMU Human Rights Program, Association of Black Students, and SMU@BLM held a vigil remembering Breonna Taylor after a grand jury decided earlier this month to not indict the officers that shot and killed her. Organization members spoke about the United States’ need to address police brutality during the Friday afternoon vigil on Dallas Hall Lawn.

The vigil started with Crislyn Fayson, a BLM@SMU leader, leading a prayer honoring Breonna Taylor’s life and family. Then, Fayson and Stacia McKellum led the crowd in singing the Black National Anthem.

“We are still here to fight for her and everyone else’s life, Father, and for the people who are discriminated against, hated for things they can not control,” Fayson said during the prayer.

Individuals were then able to come forth and address the crowd with their thoughts and how they felt about attending the vigil.

“The people who are supposed to protect us should not hurt us, and if they do, they should be held accountable,” RaSun Kazadi, the artist behind the picture of Breonna Taylor at the vigil, said. “Every single day on the football team, we, as football players, talk about holding each other accountable. If the people who are protecting us can not take that same oath, then we need change and reform.”

“These events remind us that our country is not perfect, and we have to do better, SMU junior Paloma Renteria said. “We have to do better for the Black community. Black lives matter, not just Black deaths, and I think we need to do better and show up for our peers, friends, and classmates.”

After the student testimonies, the group made its way over to the lawn and kneeled for 15 minutes of silence. Students sat together in silence, some holding each other, reflecting on the vigil, BLM movements and Breonna Taylor’s life.

“Participating in the die-in was an emotional experience but also something that motivated me,” Fayson said. “Thinking of Breonna Taylor, it made me think of my sisters on the BLM@SMU team who could’ve been [Breonna Taylor], and the fact that they are alive and here motivated me to not allow the pain to define the present and the fact that there are still people here worth fighting for.”

“Today was about community and holding each other up because that is all we have left until this justice system extremely changes,” Dickinson said. “We just have to keep going, even if it feels like there’s nothing we can do.”

BLM@SMU, SMU Black Student-Athlete Committee, SMU Human Rights Program, and Association of Black Students also held a peaceful protest in honor of Breonna Taylor’s death and the verdict of her case at the Doak Walker Statue Saturday, Sept. 26 at 4:30 p.m.