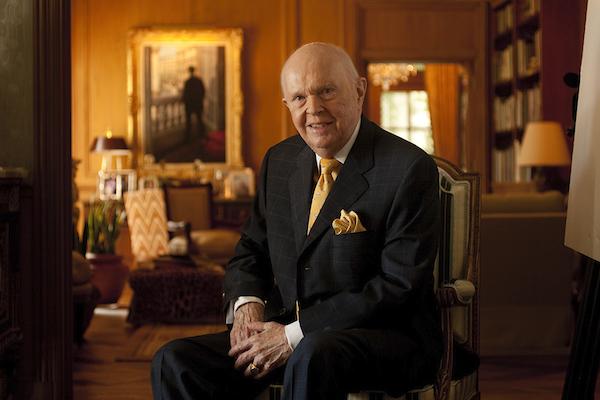 The SMU community is mourning the death of trustee emeritus and longtime University supporter Edwin L. Cox Sr. He passed away on November 5 at the age of 99.

During his time at SMU, Cox attended the School of Commerce and was a part of the Mustang Band. He was also a member of Phi Delta Theta, Alpha Kappa Psi and Alpha Phi Omega.

“Edwin Cox’s contributions to and enthusiasm for this University and the Cox School of Business are invaluable,” SMU President R. Gerald Turner said in a statement on SMU’s website. “He will remain an example of tireless drive, selfless spirit and boundless energy to the students of Cox and of SMU for generations to come.”

Cox served on the University’s Board of Governors from 1969-1987 and was chair for one term. SMU’s Edwin L. Cox School of Business was renamed in his honor in 1978 in recognition of his support for SMU for more than 50 years.

Cox was also the chair and CEO of the investment company Edwin L. Cox Company. Before founding his own company, Cox was the chair of Cox Oil & Gas Inc., SEDCO Inc., and the Keebler Company.

“Ed Cox epitomized the can-do spirit that defines the Cox School, SMU and Dallas,” Dean of Cox School of Business Matthew B. Myers said in a statement on SMU’s website.