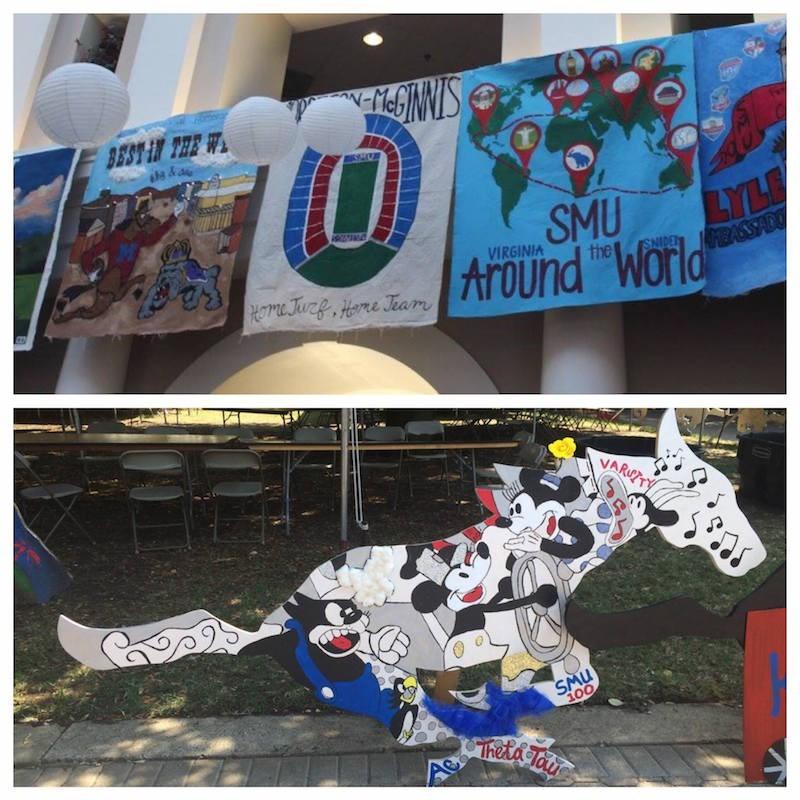 Homecoming week is a long withstanding tradition at SMU and students are not strangers to the annual festivities including float building, the Boulevard, homecoming king and queen and the homecoming football game. And with this year’s theme, “Road Trip Home to SMU,” the floats, painted Perunas, parade and decorations are sure to be something worth talking about.

Hosted by Student Foundation, this year’s celebration will be the 93rd year SMU has commemorated this campus-wide festivity. Homecoming week kicked off on Sunday, Oct. 30 with Field Day and the beginning of float building. Candidate voting polls, Rock the Vote and social media challenges started on Monday, Oct. 31.

Many of these events are not the only ways to get students involved, but these events give organizations who have nominated Homecoming kings and queens the chance to earn points toward their candidate in hope they will be crowned this year’s royalty. But don’t think you know it all; this year, Student Foundation has changed how the Homecoming king and queen will be chosen and who will win the award for best float.

No longer will the Homecoming king and queen candidates be judged solely on their own performances, but the organizations they represent will have to participate and win points on their candidate’s behalf in order for them to have a shot at winning the title.

“Obviously Homecoming is a big deal, especially the king and queen selection process,” said Student Foundation’s Homecoming chair Jack Higgins. “The overall point system has been changed – I decided to make it more weighted on the events themselves and how the organizations who participate in them place.”

In addition to the candidate’s organization going to have to put in effort in order for them to win the title, those vying for king and queen are going to be judged for additional things in this year’s race than in previous years.

“It’s going to be more based on how candidates perform in the interviews, their GPA and their extracurriculars,” Higgins said. “Voting is less important.”

Other than the differences in how the Homecoming king and queen are going to be chosen this year, Student Foundation once again shows love for the float building process and how interested they are to see what student organizations are going to do in honor of the theme “Road Trip Home to SMU.” Organizations were asked to pick a state and use them as inspiration to build their floats.

In addition to organizations that have nominated their own Homecoming candidates, other student organizations will be hosting their own celebrations, ranging from festivities in designated Boulevard tents to walking in the Homecoming parade on behalf for their association. For example, Meadows will be hosting their own celebration with free t-shirts and food as they walk in the Homecoming parade, followed by a BBQ picnic.

Make sure to look forward to the events on the last day of Homecoming this Saturday, Nov. 5. The Homecoming parade will begin at 12 p.m., which will feature all of the floats and Homecoming candidates, followed by the SMU vs. Memphis football game beginning at 3 p.m. Make sure to stay the entire game and cheer on the Mustangs, and don’t miss the awards ceremony at halftime as Student Foundation announces this year’s Homecoming king and queen.

In addition to Higgins, Student Foundation has a team of student leaders who will help run a week of activities for the student body, faculty and staff to enjoy. The Homecoming committee includes activity coordinators Christina Gilchrest and Priya Patel, campus involvement coordinator Caroline Davis, marketing coordinator Mary Carol Murphy, as well as parade coordinator Taylor Vinson and VP of programming Caroline Gurley.

Online voting for your candidates opened Monday, Oct. 31 at 8:00 a.m. Haven’t voted yet? Visit this link to cast your vote before voting closes on Friday, Nov. 4 at 5:00 p.m.