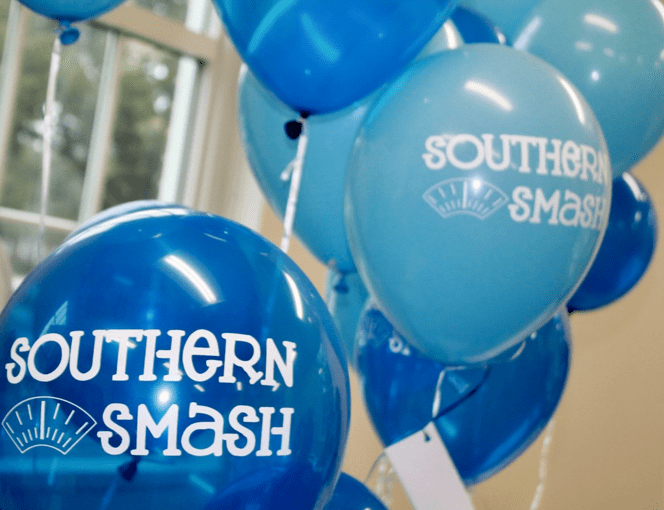 SMU students smashed scales with bats and sledgehammers on Tuesday, February 19. Students showed up in the rain to combat eating disorders at the Health Center.

Southern Smash, an organization dedicated to eating disorder awareness and disrupting the stigma that lies behind the ‘ideal’ image, held a two-part event with over 50 students to promote body positivity and smash the numbers on the scale that hold so many captive.

“This was a great experience,” Student Senator Allison Kim said. “Seeing girls from all different backgrounds and organizations come together to raise awareness about a topic that is always on the forefront—body image”.

A couple of phrases decorated on the scales were “SMASH your insecurities” and “On a scale of 1 to 10, how much do you love yourself?” Then the scales were placed in clear bags and broken to pieces.

The students swung away at the scales and experienced what Southern Smash is all about, empowering people who look towards these machines for worth and strength to instead see that within themselves.

Southern Smash along with two other organizations in Dallas, the Something for Kelly Foundation and the Eating Recovery Center, informed students about eating disorders and the different lenses that they can have.

“[An] eating disorder actually has to deal with mental health, and has no boundaries when it comes to race, gender, age–it can affect anyone,” the Eating Recovery Center representative said.

The founder of Southern Smash, McCall Dempsey, took to the stage with three SMU students: Malley Morales, Cydney Snider, and Hannah Miller. They shared their own stories of recovery in the Hughes-Trigg Ballroom that evening.

“I struggled with my eating disorder for 10 years before I embraced my recovery,” Morales said.

Morales said she found her identity in her disorder for years and even suffers long term effects from it, such as osteoporosis and problems with her heart. Now, she has gotten so comfortable with who she sees in the mirror that she decided to enter into the Miss Texas competition.

“Nothing says confidence like walking across a stage in front of thousands wearing nothing but a bikini and high heels,” Morales shared.

Hannah Miller, an SMU track star, talked about her eating disorder that developed after her athletic career was at an all-time high.

She had just won a silver medal at a national meet, setting a long distance personal record for herself. Still, as she stood up on the podium she couldn’t help but compare her body to the girls around her.

Miller’s eating disorder was distancing her from her friends, her family, her life, until one day she found the courage to share her story. This changed everything. Today, she voices her victory frequently and encourages others to do the same with their loved ones.

“If you can’t do it face to face write a letter as if you were explaining it to yourself and give it to them,” Miller said. “People will not push you away, I promise.”