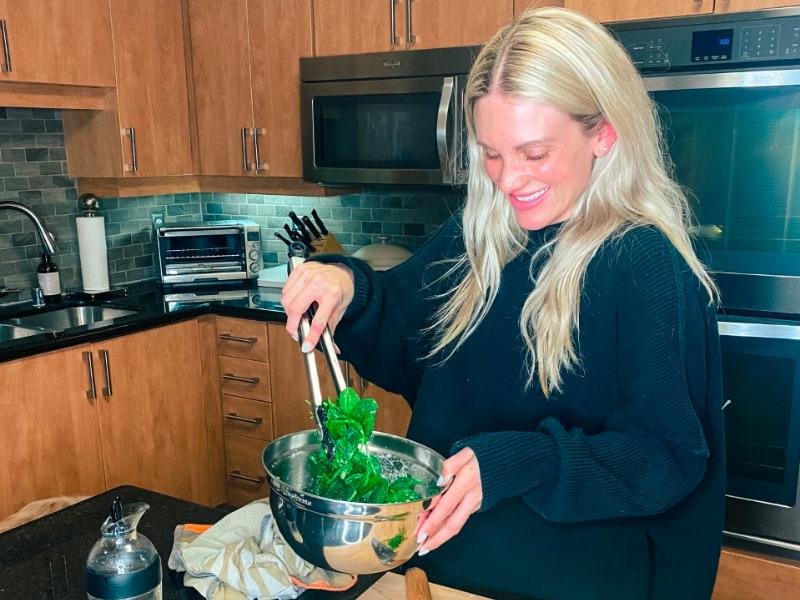 The aroma of sundried tomatoes and basil overwhelms the senses as a pan of garlic crackles to life, browning in the simmering olive oil. At the island, Cayla Atha shaves parmesan, jazz emanating softly from the speaker in the corner. Normally, she’d be drinking a glass of wine as she prepares dinner, however, as a soon-to-be mother of twins, she opts for a glass of Starla—wine without alcohol—instead.

Scraping the basil off the cutting board and into the garlic, Atha lowers the flame before pulling out a large colander to drain her perfectly al dente rigatoni. After draining the pasta, she sloshes it into the basil and garlic skillet, adding sundried tomatoes and two large pearls of mozzarella cheese. Finally, she sprinkles the skillet with crushed red pepper flakes.

“Voila!” Atha exclaims, smiling and stepping back from the stove.

An SMU alum, Cayla Atha is the founder and creator of The Savvy Spoon, a cooking blog that she created after graduating in 2010. Originally started as a creative outlet during her time working in PR for Match.com, The Savvy Spoon has since taken off. Though it began as a cooking-focused passion project, Atha’s blog has since become a destination not just for healthy recipes, but also for healthy living, boasting over 26,000 followers and a host of brand partnerships.

Atha credits the COVID-19 pandemic with giving her the opportunity to take Savvy to the next level.

“Though I didn’t know it at the time, the pandemic was really a blessing in disguise,” Atha said. “I realized that Savvy could be so much more than the little blog I started years ago.”

When her daytime job at the PilatesBarre was put on hold in early 2020, Atha was finally able to channel her energy exclusively into building The Savvy Spoon’s brand, taking her blog from a passion project to a full-time job. And, while the road to growing a personal blog is challenging, Atha believes her authenticity and genuine love of food have been key to expanding Savvy’s audience.

A lifelong health enthusiast, Atha advocates for healthy eating without dieting or deprivation, creating recipes designed to be less indulgent but equally satisfying. Through this, Atha hopes to encourage her followers to live healthy by eating healthy.

“Spending more time at home during COVID, Cayla was able to experiment with new content,” her husband said. “Whether she was creating new recipes, filming a workout routine, or sharing her daily personal care habits, she created the healthy lifestyle brand that Savvy is today.”

Atha has always been a proponent of leading a healthy lifestyle in every sense, and she believes that begins with food.

“Healthy food tends to get a bad rap from foodies,” Atha said. “For most people, healthy eating means scrimping on flavor to save on calories and fat. My goal is to close the gap between these two definitions.”

And close the gap she does. Atha’s recipes are all about putting a healthy spin on everyday favorites like pasta, enchiladas, tacos, and better-than-takeout Thai food.

“I’m spoiled,” her husband said. “I get to try so many amazing dishes, but my favorite has to be her Birthday Lemon Chicken. It’s perfection.”

Talking about her turkey ricotta meatballs, Atha describes using flax meal instead of breadcrumbs to form them.

This guiltless approach to cooking everyday favorites has driven The Savvy Spoon’s success, earning it a cult following and elevating Atha to the highest level for foodies, restauranteurs, and bloggers like Food Network.

“I’ll never forget getting that call,” Atha said, with a smile.

In early 2020, Food Network reached out to Atha, asking her to appear on “Cooking Across America,” a COVID-era show idea in which home cooks would compete remotely with one another from the comfort of their own kitchens. However, by the fall of 2020, California was still so strict with its COVID-19 filming rules that the whole show was put on hold.

However, in the late spring of 2021, Food Network reached out to Atha again, this time asking her if she would compete in the home chef edition of Guy’s Grocery Games, or “Triple G.” After multiple Zoom interviews, Atha was selected and flown out to Sonoma to begin filming.

“Cayla has always dreamed about being on Food Network,” her husband said. “Watching that become a reality was very special.”

Atha and the other competitors filmed for three solid days, competing in a bracket to get to the championship.

“We filmed literally all day, morning to night for three days,” Atha said. “It was an exhausting, but absolutely incredible experience.”

After two arduous rounds, Atha was crowned the Home Cooks champion, catapulting The Savvy Spoon onto a national stage.

“Winning Guy’s Grocery Games validated all of the work I’d put into growing Savvy,” Atha said. “More importantly, it made me even more excited for the future of Savvy going forward.”

Atha also has big plans for her blog’s future, hoping to create recipes that will reflect her life as a new mom by incorporating some family-friendly recipes into her content strategy that could help her garner an even bigger following and reach a new demographic.