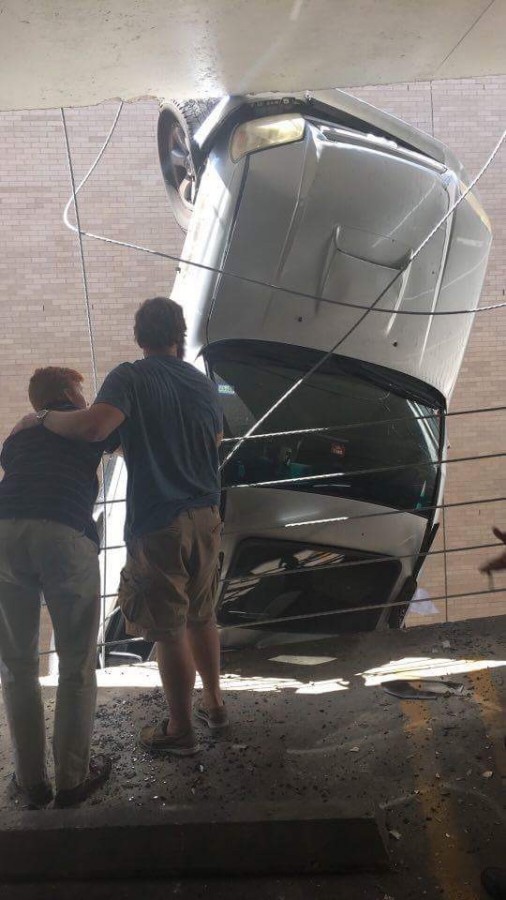 Dressed in a blue golf polo and khaki pants, William O’Connor packed his workout bag in his Toyota 4Runner and drove toward Gold’s Gym in downtown Austin on Sept. 9.

As he made his way up to the ninth floor of the parking garage, the car accelerated, went over a cement block and through steel cables, likely wrapping around one of the car tires. O’Connor was left in the vehicle, dangling over the side of the garage.

“It happened incredibly fast,” 23-year-old O’Connor said. “I thought this was the day I’m going to die.”

O’Connor said that after a few moments his brain switched into survival mode, changing morbid thoughts into instinctual cries for help.

Zachary Cayson, who coincidentally just parked his car in the same garage, heard O’Connor and ran out to help. Cayson had his friends call 911 as he helped O’Connor crawl out his car window to safety on the sixth floor of the parking garage.

O’Connor said this all happened within a minute, with the police and fire department arriving on scene shortly after rescue. Once they confirmed he wasn’t injured, nor on drugs or alcohol at the time of the crash, he was released.

“I was still in shock,” O’Connor said. “I was worn out, sitting in the middle of the garage for a few minutes, until I thought ‘alright, I should do something.’”

When he walked outside of the parking garage, a second wave of shock ensued. Hundreds of people circled the area to look at O’Connor’s vehicle still suspended over the side.

“I felt like I was walking away from my own accident,” he said.

O’Connor had no phone to contact family because it was left inside his car. He decided to accept an offer by a nearby coffee shop owner who said he’d help however he could.

O’Connor proceeded to cut back through the garage and went into the store. He called his mother to ensure he was okay, then sat around until his vehicle was brought down.

After the call, O’Connor said the two bantered.

“[The coffee shop owner] kept saying ‘dude, this is such a trip – it’s incredible. You have the best story of all time,’” he said, laughing. “I was incapable of any emotion at that point but remember saying ‘I can’t wait to see it like that.’”

Around four hours after the crash, O’Connor reclaimed his car and went home. He said the next few days were difficult to process.

“I don’t even know how to describe the shock I was in,” O’Connor said. “I couldn’t hold a thought for longer than three seconds. I was incapable of any emotion.”

O’Connor said he realized his behavior was common for someone in recovery, especially based off reactions from his loved ones when he told them about the incident.

“People told me they almost started crying after seeing photos,” he said. “But for me, when I read every article and photo about it, I was just numb.”

O’Connor left Austin after a couple days to visit his home in Fort Worth to recover and slowly return to normalcy.

The week after he left Austin again to visit Dallas and attend the first boulevard at SMU.

O’Connor said he was happy to see his friends and loved ones.

“It was awesome,” he said. “That was the first time I got to see a lot of my friends in person after everything happened.”

O’Connor said he’s a lot calmer now and is working through the recovery process.

“You know how finding a pebble in your shoe can stress you out or irritate you?” he said. “Those things don’t register with me anymore. I choose not to care about it. The whole thing has chilled me out a lot.”