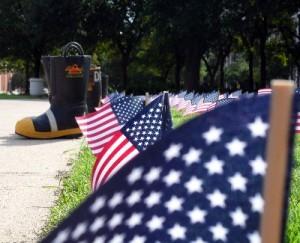 After controversy erupted last week when SMU told Young Americans for Freedom that their annual 9/11 memorial would no longer take place on Dallas Hall lawn but in Morrison-McGinnis park, the university has agreed to return all displays to the traditional location on the lawn.

In a press release from SMU, officials and student leaders worked together to achieve a revised display policy.

This way, the unused end of the lawn can be used for other purposes while displays are being held, the release says.

The university intends to revise a new display policy, this time consulting with student government and other campus leaders.

“I thank the students from across campus who came together in the spirit of mutual respect and civil discourse to achieve this outcome,” President R. Gerald Turner said in the release. “Throughout these discussions, students have expressed their commitment to freedom of expression – a value the University shares.”

SMU caught widespread ire after a number of outlets picked up an open letter penned by student organizations, calling the university out for suppressing campus speech after the display policy was unexpectedly changed over the summer.

This policy required all displays, including the 9/11 memorial and Mustangs for Life’s anti-abortion display, to be moved to MoMac park. The policy also stated that the university aims to avoid “messages that are triggering, harmful, or harassing.”

An SMU spokesman later said that the policy language hadn’t gone through the proper vetting process. At this time, it’s unclear who added the phrasing.

Gov. Abbott calls on university to return 9/11 display back to Dallas Hall lawn

A day after the open letter, Texas Gov. Greg Abbott called on R. Gerald Turner to return the 9/11 display to its “appropriate and traditional place of honor” on Dallas Hall lawn.

Turner responded to Abbott, saying the governor had been given “incorrect information” about the school’s display policy.

Abbott’s office did not immediately respond for comment Wednesday evening.