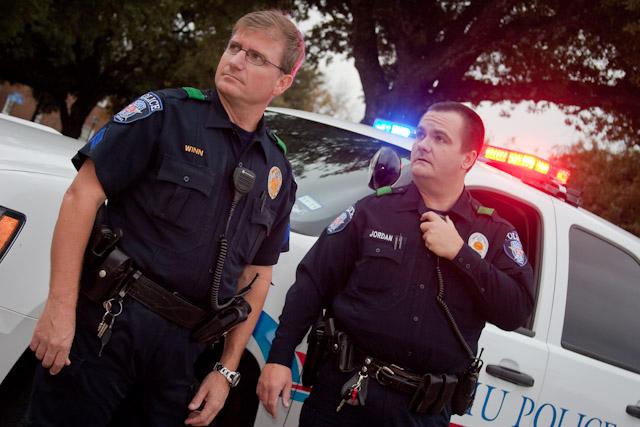 SMU received a perfect score on its safety scorecard, mandated by the Clery Act. A perfect score indicates a strong dedication to campus safety. (Spencer J Eggers/ The Daily Campus)

The SMU Technology Reporting class reviewed the university’s crime reporting policies and found that SMU appears to be fully complying with the federal Clery Act, which requires colleges to proactively report crimes on campus.

The students conducted a 21-point audit as part of the Light of Day project, a collaboration of university journalism students aimed at increasing the awareness and use of public information laws in Texas.

SMU satisfied all 19 mandatory checkpoints and showed progress in the two unfulfilled optional checkpoints from 2009, demonstrating a level of compliance the university was far from attaining several years ago.

“In terms of a surface review, it doesn’t seem that there are any clear Clery compliance issues,” said S. Daniel Carter, director of public policy for Security On Campus, a national nonprofit dedicated to the prevention of crime on college campuses.

Penn State’s failure to report allegations of sexual abuse on its campus led the U.S. Department of Education to launch a formal program review of the university’s compliance with the Clery Act, a federal law that requires colleges and universities to maintain and report information about crime on or near their campuses.

If charged with a violation of the statute, Penn State will face a fine of up to $27,500 per violation.

To evaluate SMU’s Clery Act compliance, Technology Reporting students developed the Clery Act Scorecard, a rubric created for the Light of Day Project that was adapted from Clery requirements.

In 2004, SMU students who compiled similar information found the school violated several conditions of the Clery Act by failing to issue crime alerts and not adequately informing students of at least four sexual assault and rape cases on the campus over three years.

Since the exposure of these negligent practices, SMU has made major improvements regarding Clery Act compliance.

For example, on Sept. 23, 2010, the university released a crime alert after a student reported a sexual assault the day before.

The incident took place on Sept. 19 in a male student’s dorm room.

According to the crime report, the victim said she met the male student at the previous evening’s football game and attended a party with him before returning to campus and going to his residence hall.

The crime alert, distributed via fliers around campus and posted online, informed students of the alleged assault and included personal safety tips students should follow if ever sexually assaulted. SMU’s reaction to the incident demonstrated the university’s compliance with the Clery Act.

“[Our goal is] to provide the students, faculty, staff and the community with information to increase their awareness about crime on campus,” said Perez, who is responsible for preparing SMU’s annual Clery report. “The SMU Police Department is dedicated to making the SMU campus a safe and secure environment.”

SMU senior Megan Welch, who has lived on campus for all but one semester of her college career, says she feels “remarkably safe” on campus.

“As far as I know, SMU does a good job of letting students know what’s going on,” Welch said, noting fliers posted on dorm doors regarding serious crimes on campus.

Welch, who currently lives in the SMU Tri Delta house, said she remembers when a crime alert notified students that a taxi driver had assaulted a female student.

“The alert made me more aware of my safety when taking cabs, which is incredibly important since cabs are such a large part of the SMU ‘going out’ culture,” Welch said.

SMU also improved in terms of optional checkpoints in 2010. In the university’s 2009 Clery Act Report, the school failed to address and explain anti-retaliation protections that were added to the Clery Act in 2008 to protect whistleblowers.

Although referencing the “whistleblower protection” provision isn’t something institutions are required to discuss in their annual security reports, SMU added a policy statement about the new provision to the 2010 Clery Act Report as a result of last year’s Clery Scorecard, which pointed out the deficiency.

Unchanged from last year’s practices, the university has yet to establish a mapping system to depict areas where crimes have been reported. While optional, Carter said the mapping of crimes would be helpful for students, depending upon the complexity of a campus.

“If people have a good sense of what the campus is, the map is less important than if the campus has a more complex geography,” he said.

Detective Perez said crime mapping is something she is considering pursuing in the future, and she has been looking into classes she can attend to gather more information about those types of programs.

“I do think crime mapping would be a good addition to the Clery Report,” Perez said.

In the meantime, students can visit bit.ly/smulod to view a map created as part of the Light of Day project showing on and off-campus crimes during 2010.

Posted on December 1st, 2011 by Meghan Sikkel
ShareTweetShare on Google+Pin on PinterestSend with WhatsApp

One of the best things about being a student is having the time and space to truly focus on learning more and preparing for the next stage of your life. To do that, you may find yourself taking advantage of other student perks, such as discounted software lice... END_OF_DOCUMENT_TOKEN_TO_BE_REPLACED

A Diverse Center for a Diverse Neighborhood

The Northwest Community Center located in Vickery Meadow provides resources to the predominant refugee community in the neighborhood and partners with non-profits to offer their services as well. END_OF_DOCUMENT_TOKEN_TO_BE_REPLACED