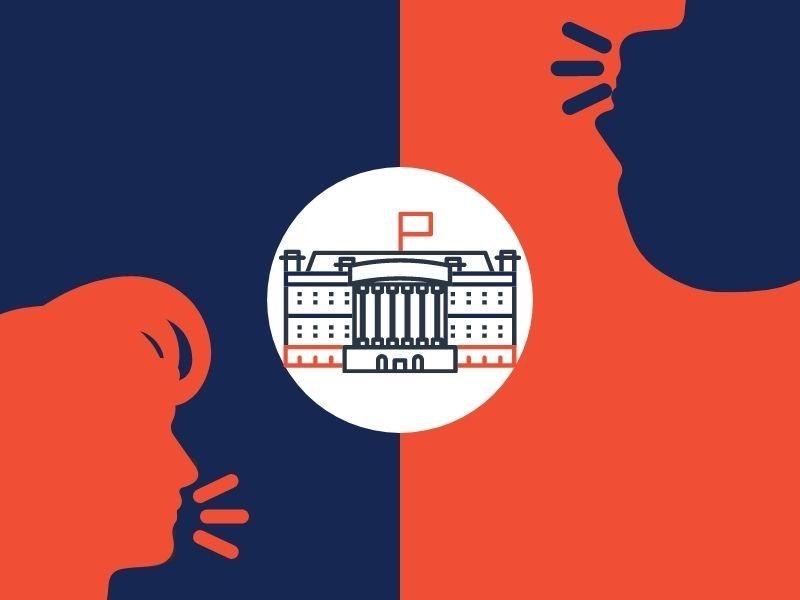 SMU Libraries and CCPA professor Dr. Benjamin Voth collaborated to host an in-person and virtual screening of the first presidential debate, which garnered over 70 participants who engaged in conversation before and after the debate on Tuesday, Sept. 28th. At the end of the call, 58 students voted in an online poll for their favorite debater and 68 percent said that Joe Biden won the debate.

Tough debate to judge but I give the edge to Biden. Debate can be moderated better. We had 50 students live and more than 50 on zoom. @SMU_Libraries @SMU #PresidentialDebate2020 pic.twitter.com/361k3OnP8z

The screening started with a short presentation by Dr. Voth, associate professor of communications and debate team director. Voth discussed the history of presidential debates, average audience size and importance of the moderators in the development of the debate.

Although most students and faculty logged off the Zoom call to view the debate on their own screens, some continued to share information and their opinions in the chat room. One student sent a link to the Supreme Court’s docket, as was referenced by candidate Joe Biden, and another sent a link to an informational website that explained the difference between a V and a K shaped economic recovery. Faculty in the chat also provided resources on how and where to vote on campus.

The Head of Information Literacy at SMU, Megan Heuer, one of the organizers of the event, said that they wanted to give students the space to talk about political issues since this is a lot of student’s first opportunity to vote in a presidential election.

“We wanted to offer students the opportunity to discuss the debate and the issues that it raises in a civil space,” Heuer said. “The virtual event allowed us to do that in a way that would have never happened otherwise.”

SMU sophomore Tyler McCall agreed with the benefits of the virtual watch party.

“No matter what your political leaning is, I think it’s so important to be as informed as possible,” McCall said.

The debate included both presidential candidates talking over each other and Thomas Park, a history major at SMU, mirrored the thoughts of many attendees.

“It’s like there’s just two press conferences being played on top of each other,” Park said. “I thought the 2016 debates were heated, but holy cow this is wild.”

Once the debate was concluded the online attendants voted for who they thought best performed in the debate. Out of the 58 people who voted, 40 voted for Joe Biden, while only 18 voted for President Trump.

Register here to participate in the future SMU Presidential debate watch-parties and check out this link for more resources on how to get involved in the election at SMU.