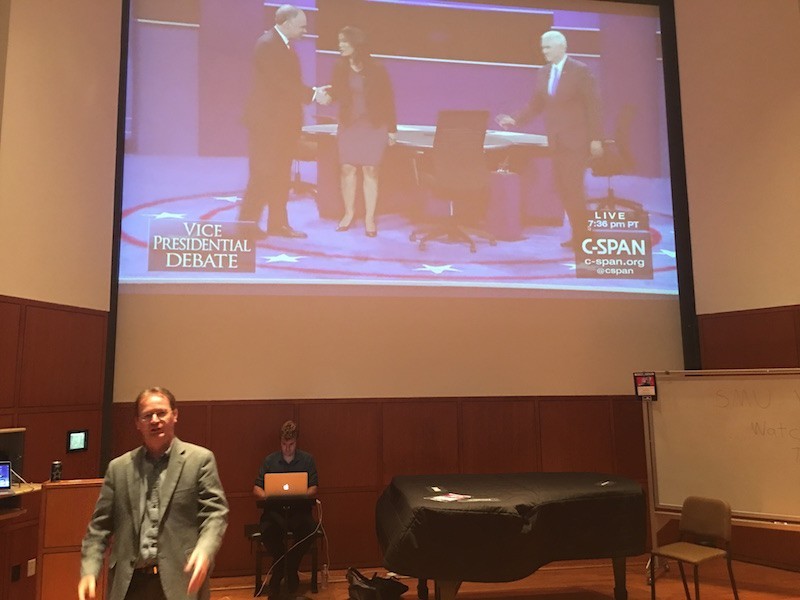 Millenials do not turn out to the polls as much as some other groups, but the 2016 election has captured the attention of at least some SMU students. Political discourse engulfed those in attendance at the SMU Vice-presidential debate watch party Tuesday night.

The event was hosted by the SMU debate team in the wood-lined walls of the O’Donell Theater in the Meadows School of the art, although only two members of the team were in attendance among the crowd of around 20 students. Dr. Ben Voth gave opening remarks, recapping the first presidential debate, which took place last week, and previewed the 90-minute installment, which took place at 8 p.m. Tuesday night on all major networks.

“I don’t think this will have a huge impact on the polls, but it does have a chance to build momentum for a candidate because 40 million or so people will be watching,” Dr. Voth, an SMU faculty member who specializes in presidential elections, told students before the debate. “This is a bigger stage than any cable news network interview these two can do, and they’re uninterrupted.”

The debate pitted republican vice president nominee and governor of Indiana Mike Pence against Democratic nominee and senator from Virginia Tim Kaine. It was held at Longwood University in Farmville, VA, the same town in which Robert E. Lee surrendered to Ulysses S. Grant to end the Civil War.

After the debate, students engaged in a post-debate debriefing in which the highlights and lowlights of each candidate’s night were discussed. The overall feeling was one of pessimism about the two campaigns and effectiveness of these debates.

“I don’t think these debates work very much at all honestly,” Katrina Sipan, a senior, said. “The candidates kind of trail off the original question.”

Sipan did note that the November 8 election between Donald Trump and Hillary Clinton is an important decision and that she is encouraging her friends to vote. Another student said he was surprised by how the candidates for the second-highest office in the land failed to resonate with young voters.

Even if the substance does not appeal to college students, some still believe in the importance of political discourse.

“I’m actually a citizen of the United Kingdom, but this still effects me,” Isabelle Smithard, a senior, said. “I’m planning on living here full-time after college so I care about things like taxes and immigration.”

The SMU debate team will host debate watch parties for the remaining two presidential debates on Oct. 9 and Oct. 19.