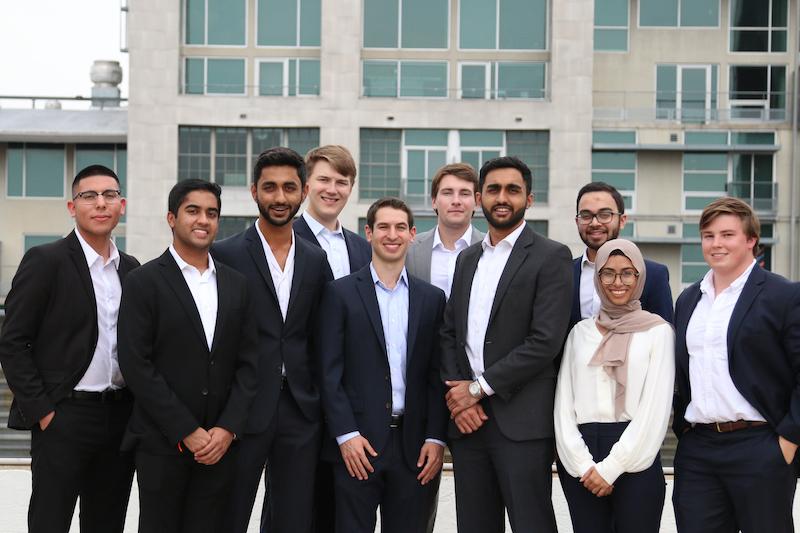 “We don’t actually invest in currencies in a major way. Our strategy is very simple. Our strategy is to invest in the picks and the shovels for this gold rush,” founder Hamiz Mustaq Awan said. We don’t want exposure to the price of gold itself, or the price of bitcoin itself. We want to invest in companies to use this ecosystem– ‘speculate’ on it, if that’s the word people want to use.”

Invoking the gold rush is a powerful comparison to make, as historically the gold rush spurred thousands upon thousands of people westward on a maddening hunt for gold. The California Gold Rush was a massive event in history. That’s what Awan and Raizes believe to be the future of cryptocurrency.

“Our strategy is to invest in the picks and the shovels for this gold rush.”- Hamiz Mustaq Awan

Their organization Plutus21 is an alternative asset investment firm, where they invest in real estate and cryptocurrency. Plutus21 wants to invest in companies that allow people to use the cryptocurrency ecosystem.

Plutus21’s original goal was to encourage investment into economies overseas, which investors tend to stay away from–unless it is a stable, well-developed economy–due to risk.

Plutus21’s mission, in short, is to broaden the global economy and encourage transnational business deals. That’s an enormous goal for a firm as new as theirs. Awan recognizes this.

“Basically, if a 20 year old gets up in front of a bunch of investors and says, ‘Hey, give me money, I can take it, get you consistent returns in a foreign country,’ there’s a lot of questions, right?” Awan said. “Like question is, how do you know how to do it? How can you do it consistently? What transparency are we going to get? And all of those different questions, right? So it was the question that we were facing and stopping us from growing, and proving ourselves as investment managers.”

Cryptocurrency is a means to achieve Plutus21’s overarching, original mission. It builds up Plutus21’s portfolio, so the firm can gradually prove it can handle large, risky investments.

Richard Raizes, a partner of Plutus21, started his career in corporate and investment banking. “I decided I wanted to leave that to start the crypto fund here at Plutus21. So, that’s becoming our true focus of the firm. It’s our most innovative and also riskiest product by far,” Raizes said.

Awan added, “And the reason why it was very attractive to me was because it’s actually gotten us closer to our goal than we’ve ever been before. And that’s because cryptos represent a global investment playing field.”

Awan said they’re taking U.S. investors and giving them exposure to new global markets. “You can’t do that with traditional assets as easily,” Awan said.

Plutus21 was started on SMU campus as a student organization. The Daily Campus covered them in November 2017. Back then, Awan and Ricardo Sieveking headed the group. Plutus21’s stated goal is to encourage U.S. investors to areas abroad that present great opportunity but high financial risk. Plutus21 is currently located in the SMU Incubator for startups in Expressway Tower.

“You can’t do that with traditional assets as easily.”- Hamiz Mustaq Awan

The word cryptocurrency has been volleyed around as a buzzword since the December 2017 peak of Bitcoin’s value, Bitcoin being one form of cryptocurrency. There are a lot of cryptocurrency skeptics out there due to the volatile nature of currencies’ values. Raizes and Awan remain steadfast believers in the technology’s potential.

“The way that we see cryptos is cryptos are going to disrupt countries other than the U.S. much faster than they would the U.S.,” Awan said. “And that’s because the U.S. has a very established financial, legal business ecosystem. There’s not a lot of room for improvement. For the most part, it’s one of the best systems in the world.”

Awan and Raizes believe economies in peril will adopt cryptocurrencies. Economies like that of Venezuela, or Turkey when the value of the lira plummeted almost overnight. Compared to the volatility of their traditional currencies, the fast-paced, hairpin changes of cryptocurrency values feel tolerable.

“What this technology does, high level, is it’s bringing freedom to people’s personal finances,” Raizes said. “It allows people to save their money in the blockchain, the form of a cryptocurrency, and they can basically memorize some words and take their money with them anywhere in the world, and nobody can stop them. No government can say, ‘Hey let me search your mind. Do you have any words memorized in there?'”

Awan’s and Raizes’ jobs are by no means traditional 9-to-5 jobs. They’re constantly on the watch and monitoring their investments. Awan says their day is filled with meetings that end around 5 p.m., and they work up until 8 p.m. or 9 p.m. and on weekends. They keep an overnight watch too, because, unlike traditional markets, cryptocurrencies are a global market and the values can change overnight.

“You can’t stop this innovation. And so you’re either going to jump on the bus or you’re going to get run over,” Awan said.

“We do like to give back as alum to the university. We’re very privileged, actually, because this is the SMU Incubator that you’re in, and we are the largest company in the Incubator, and we want to be good corporate citizens,” Raizes said.